KTM may be known for its extremely outlandish, over-the-top street bikes such as the 1290 Super Duke R, as well as the now-discontinued 1190 RC8.These bikes are quite literally the embodiment of excessive power on two wheels. It is, however, interesting to think that Pierer Mobility, the parent company of KTM, Gas Gas, and Husqvarna, has a slightly different viewpoint when it comes to electric motorcycles.

You see, the company firmly believes that the future of two-wheeled mobility lies in power outputs of 15 horsepower and below—for electric-powered machines, at least. Company CEO Stefan Pierer even made the bold claim that “two-wheelers over 48 volts are going in the direction of e-fuels". In other words, the backseat of development when compared to electrification. We do know for a fact that none of Pierer Mobility’s companies are working on performance-oriented electric two-wheelers. Machines such as the Husqvarna E-Pilen and Vektorr electric scooter all fall well within Pierer’s 15-horsepower goldilocks zone. 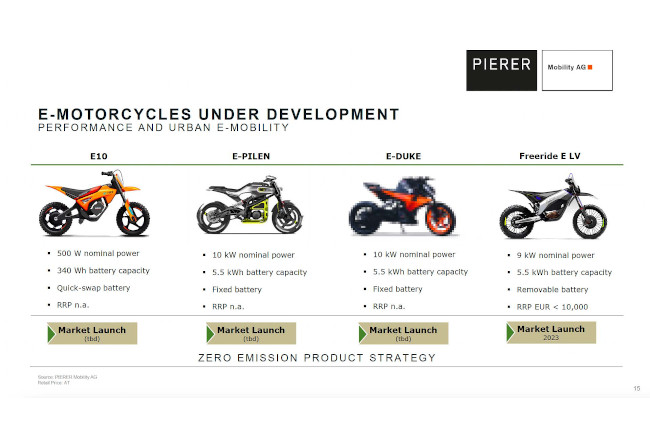 That said, it would appear that there could soon be a new addition to the company’s all-electric portfolio in the form of the E-Duke. When it becomes a reality, the E-Duke will be KTM’s first production electric two-wheeler, and will certainly be a hit among fans of Team Orange. Now, we say when, and not if, because Pierer already confirmed the development of the E-Duke in the company’s recently published investor’s report.

So, what exactly can we expect from the E-Duke? Well, prepare to be rather disappointed. As it turns out, the E-Duke will share the same platform as that of the Husqvarna E-Pilen, meaning it won’t even have the peppy punch of the smallest gas-powered Duke on offer, the 200 Duke. Expect a neutered, more easygoing machine with a power output of no more than 15 horsepower. As such, top speed will likely be limited to around 100 kilometers per hour. Given that this is the future that KTM envisions, one can’t help but hope that the company changes its mind and produces more performance-oriented electric two-wheelers down the road.