Here in the Philippines, we’re all very familiar with KTM and its Duke range of motorcycles. Available in a host of sizes and displacements, the Duke is one of those bikes which you never have to part ways with, no matter your skill level. First time riders can very easily swing a leg over the 200 Duke, gain a little experience, then upgrade to the punchy 390 Duke.

KTM’s local manufacturing facility has been in operation for around five years now. Its facilities have been tooled to produce everything from KTM 200 bikes all the way to 790 models, and it satisfies the demand not just of the local market, but neighboring ASEAN markets, as well. In Europe, however, KTM temporarily halted the release of the 790 Duke to make way for its slightly bigger sibling the 890 Duke. This time, though, in true KTM fashion, it’s returning the 790 Duke to Europe, but this time with a revised Euro 5 motor. 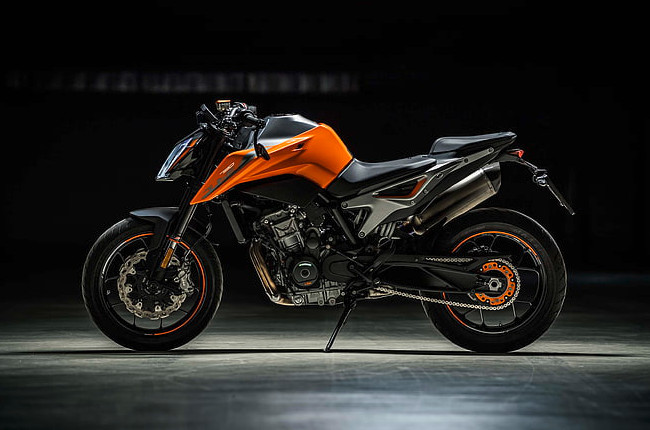 You may be familiar with the KTM 790 Duke as having a power output of 105 horsepower. It is, indeed, one of the most powerful twin-cylinder engines of its displacement. Euro 5 constraints, however, have reduced the new engine’s output to 95 horsepower—by no means a slouch, but still a difference you would feel under heavy acceleration. The updates, of course, come via an updated exhaust system that features enhancements to the catalytic converter, as well as tweaks to the engine mapping.

Other than that, the 790 Duke continues to boast a suite of premium features such as full-LED lighting, a TFT instrument panel, riding modes, cornering ABS, lean-sensitive traction control, and of course, premium WP Suspension components. Optional extras include an up and down quickshifter, motor-slip regulation (MSR), cruise control, and a tire pressure monitoring system. Of course, KTM’s proprietary My Ride system, which allows you to connect your mobile phone via Bluetooth, can also be unlocked.

Locally released units of the KTM 790 Duke will be unaffected by this, as KTM Philippines continues to offer the bike in its model lineup. Priced at P599,000, it boasts incredible value for money, and is one of the biggest, most performance-oriented motorcycles to see local assembly.