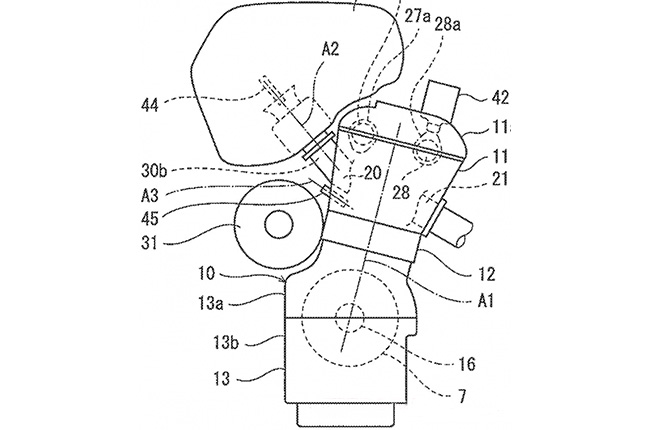 It’s not unusual for you to hear news about the revival of the two-stroke engine with technological innovations to make it “cleaner”. it’s also common to hear about superchargers being integrated into motorcycles to creating hypersport or hypernaked bikes like the Kawasaki Ninja H2. News of hybrid bikes slowly making it into the horizon just as cars did in the past are also starting to gain traction. However, a combination of all of these innovations being thrown into one design is unprecedented — and that’s exactly what Kawasaki is trying to do now. Kawasaki’s recent patent application revealed a super-charged two-stroke hybrid engine, that’s designed to change the way we think about hybrid motorcycles in relation to traditional combustion engines. Its new design makes use of a serial hybrid system rather than a more familiar parallel hybrid system that is more commonly used with cars such as the Toyota Prius.

A series or serial hybrid uses electric power alone to drive the wheels. The combustion engine only comes in to generate the electricity needed to power the series hybrid. Normally, the low-powered combustion engine is configured in such a way that they merely serve as “range-extenders” for electric vehicles providing some extra charge for the batteries to give its range a little boost. Kawasaki’s idea was not planning to use a mere low-powered engine in its patent design just to top up the hybrid engine’s battery. Instead, it makes use of a high-performance engine that’s more efficient and cleaner-running than normal as it operates at its most efficient speed. While two-stroke engines have a reputation for having a “dirty” emissions, the two-stroke cycle is actually well suited to clean-running and efficient engines. Instead of looking at Kawasaki’s past designs of their two-stroke motorcycles, they looked at the plethora of supercharged two-stroke diesel engines that they used on many of their ships which are renowned for their efficiency.

However, rather than using ports in cylinder walls like traditional two-stroke engines, the new design uses poppet valves like a four-stroke cycle engine, complete with double overhead camshafts. In other words, it’s really just the cycle that they’re changing from the four-stroke to two-stroke. Yet, a supercharger is still vital for the design to work. It is needed to increase the pressure of the intake air to allow it to fill the cylinder and evacuate the spent gasses more effectively. Because of this, both the exhaust and inlet valves are open at the same time which makes direct fuel injection vital. Thus, adding the fuel after both the valves have closed can now be done to make sure that no unburned fuel can escape into the exhaust.

With its new design, Kawasaki uses a cross-plane crank which gives the cylinder would have a combustion event for every 360-degree turn of the crank rather than every 720 degrees. This also ensures that the combustion events are spread evenly with one cylinder firing for every 90 degrees that the crankshaft turns. However, instead of being attached to a clutch and gearbox, an electric generator is attached at the end of the crankshaft which feeds power to a storage system, which can either be a small battery or a set of supercapacitors which in turn would send the electricity to an electric drive motor that is connected to the rear wheel.

This new technology that Kawasaki develops may be a lot to chew and has a long way to go before it reaches its production capacity. However, with emissions standards continuing to tighten, Kawasaki isn’t gonna let the combustion engine take a hit and go down without a fight.