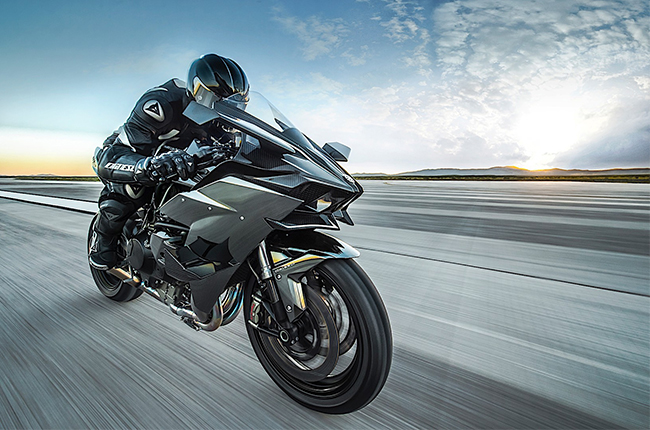 Team 38, an independent motorcycle team that has its own roster of Kawasaki engineers and riders, made history during the Bonneville Speed Week by creating the fastest supercharged production motorcycle. Bonneville Salt Flats is regarded as the holy grail of speed, where vehicles can test their limits on the almost completely flat ancient lakebed.

This will be the team's second attempt at a world record, the first one was from two years ago. Team 38 says it has learned a lot from its first go at the record and is ready to give it another shot. Team 38 has a history of setting records, netting 14 AMA speed records at the Bonneville Salt Flats in 1967, the highest ever number of records set in a single year. Worth noting is that the record run was accomplished by the street-legal version of the Kawasaki H2, not the H2R which is limited to track use only. The specially prepared Kawasaki H2 was entered in the P-PB 1000 class, a class limited to motorcycles below 1000cc with superchargers. Being a production only class, modifications are extremely limited, so base performance of the motorcycle and rider performance are the key aspects here. Team 38’s Kawasaki H2 was able to hit speeds of 340.571 km/h followed by a return run of 333.557 km/h. The average speed of the two runs – 337.064 km/h – was enough to secure the P-PB 1000 class win.

The Kawasaki H2 produces 200 hp and 134 Nm of torque from a 998cc supercharged four cylinder engine. The supercharger produces 20.5 psi of boost, and the bike weighs in at 250kg, so you can imagine the power to weight ratio here. It does 0-100km/h in 2.6 seconds and has an estimated top speed range of 330-400 km/h in absolutely perfect conditions. Other motorcycles, such as heavily modified Harley Davidsons and Triumphs that push 1650cc also enter in their respective classes. Hundreds of motorcycles from 100cc to upwards of 3000cc in stock and heavily modified form join in during the weekend to prove their mettle during the week long event.