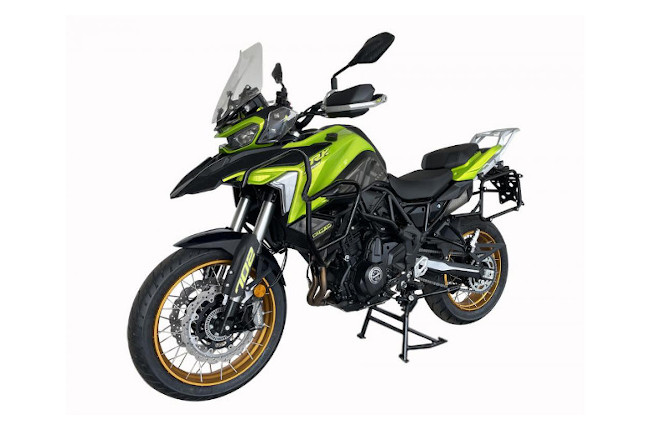 The intermediate adventure motorcycle category is exploding right now, due to a slew of highly capable and appealing models from a variety of manufacturers. While 1000cc and higher adventure bikes ruled the market a decade or so ago, the 700cc to 900cc class now reigns supreme, with models like the KTM 790 Adventure and Yamaha Ténéré 700 rolling off showroom floors left and right..

Other motorcycle makers big and small have also stepped up their game. Brands like CFMOTO with the 800MT and Aprilia with the Tuareg 660, despite not having a full-fledged adventure model in its lineup, are all strong contenders in the market. This time, Benelli, the Italian brand owned by Chinese motorcycle behemoth Qianjiang Motors, may be bringing us a new player in the middleweight ADV game with the new TRK 702. Those familiar with Benelli will know that the TRK adventure bike, especially in its 502 version, is quite popular in Europe. In fact, the bike has set some of the brand's most spectacular sales records in recent years. TRK 702 rumors have been circulating for about a year now. This time, though, it appears that the bike will actually become a reality, as the model was recently homologated in China. The machine's specifications appear to place it at a reasonable pricing range while still containing some outstanding components, leading us to assume that it would be a capable off-roader.

Benelli appears to be using a powertrain similar to that of CFMOTO for the upcoming TRK 702. The parallel-twin engine from the 700 CL-X, a bike which we have come to like very much, appears to be making a comeback under Benelli branding. With a power output of roughly 75 horsepower, the 693cc, liquid-cooled, and fuel-injected engine in the forthcoming TRK should be able to compete with the other mid-sized ADV models.

In terms of features, we find a different frame from the previously projected model from October 2021. More premium suspension components appear to be on the way, with a long-travel inverted front fork, probably with some adjustability, taking the place of the 502 models' traditional telescopic ones. The TRK 702 also comes with wire-spoke wheels that measure 19 inches in the front and 17 inches in the back. It's also possible that a road-going model with 17-inch cast-aluminum wheels may be released.