When it comes to performance any BMW fan will easily recognize the M tri-color badge as an indicator for performance, speed, and excitement. While these were initially thought to be only seen on the performance cars that the German automaker produces, the M-badge has officially made its way into BMW’s motorcycle lineup. Just like the legendary M3, and M5, BMW Motorrad now offers its first M Performance motorcycle meant to tear up the track and shave off seconds from your lap times in the form of the M 1000 RR.

As early as September 2019, a number of M-branded trademarks started appearing in Europe meant for motorcycles. The M 1000 RR was among the first on the list to make it into production. It is a more aggressive, street legal version of the S 1000 RR, but still a notch below the track exclusive HP4. Powering the M 1000 RR is a water-cooled inline four-cylinder tweaked to produce 212 hp and at 14,500 RPM and 113 Nm of torque at 11,000 RPM. Modifications to the engine’s interior components including a new two-ring forged pistons, slimmer and lighter rocker arms, machined intake ports with new duct geometry, titanium valves as well as an optimized intake system bumps up its power output and allows it to rev much higher than the S 1000 RR. Its lighter pistons, titanium connecting rods, and Akrapovič exhaust system shaves about 5kg from its curb weight. Its chassis has also been radically improved by using an aluminum bridge frame and an optimized inverted forks to enhance handling on the track. Unlike the S 1000 RR and HP4, BMW paid more attention to its aerodynamics. The German brand took inspiration from Ducati and Honda by adding M winglets on its fairings to increase downforce on higher speeds and help keep the tires on the road. 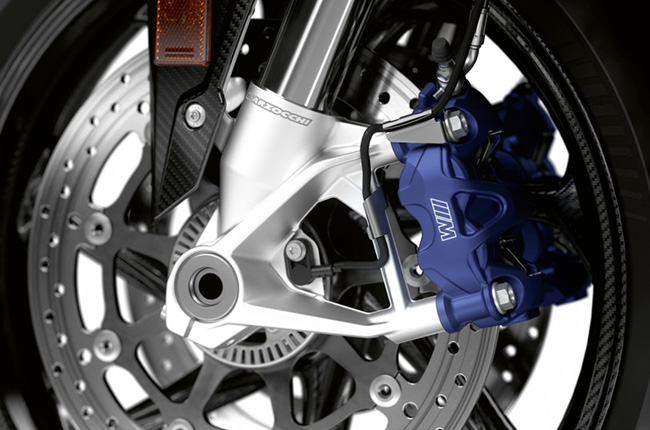 The M 1000 RR is also fitted with performance M brakes, highlighted by its blue calipers, a lightweight M battery, and rolls on carbon wheels to shave even more weight. The 6.5-inch TFT instrument display and interface can be used with an M GPS data logger and lap timer to keep tabs of all your track data. At the same time, it also has 7 built-in selectable riding modes: Rain, Road, Dynamic, Race, and Race Pro1-3. It is also paired with the latest Dynamic Traction Control (DTC) and DTC wheelie function with a 6-axis sensor box. Track-specific electronics include Launch Control for that perfect race start and Pit-Lane-Limiter for more precise speed in exiting the pit lane. Clutchless shifting is provided by Shift Assistant Pro for gearing up and down with ease with simple reversibility of the shift pattern for optimal race track use. However, for more road-biased use, the M 1000 RR is also equipped with LED lights, a USB charging socket in the rear, electronic adaptive cruise control, heated grips, and Hill Start Control Pro for ease of use while riding on slopes. BMW also offers a long list of optional accessories from its catalogue which includes the M Endurance chain.

BMW Motorrad Philippines is yet to announce its official launch and price of the M 1000 RR in the country. In the UK, it’s priced at an equivalent of $39,385 while in Canada, it goes for $31,815. Thus, once it enters the Philippine market, it can range within the P2M range exclusive of custom duties and taxes.