For many riders, their motorcycles are treated as prized possessions. This means that protecting their bikes is of the utmost importance. That said, several aftermarket accessories are currently being marketed as viable solutions for adequate bike protection. Some are even claimed to protect not only the motorcycle but the rider as well.

The crash bar is one such accessory that has gained a reputation among several riding circles. If you've seen one around, you may be wondering, should you get one for yourself?

What is a motorcycle crash bar, and how does it work? ometimes called an engine guard, a crash bar is a type of metal tubing installed on either side of a motorcycle's frame. Crash bars are almost always made of metal, such as steel and aluminum. There are crash bars available for most naked bikes, dirt bikes, sportbikes, and other types of motorcycles.

While the design varies depending on the type of bike and the crash bar itself, the idea is for the metal to protrude significantly beyond a bike's frame. Theoretically, during a crash, the protruding metal would prevent the motorcycle from completely hitting the ground.

In this scenario, the engine and its surrounding components would be safe from impact from the road. If the rider falls to his side, he may not be crushed by the full weight of the motorcycle. Thus, if the crash bar works as intended, this could protect both the rider and the bike against heavy damage.

Not all crash bars are created equally. Some are stronger and more expensive, while others can be cheaper and serve more of an aesthetic purpose.

Mild steel - Also known as low carbon steel, this type of steel contains a low amount of carbon, making it cheaper to produce and more malleable as a crash bar material. The downside is that mild steel is susceptible to corrosion, so it's not as suitable in climates like ours, where heavy rains persist for a good chunk of the year.

Stainless steel - As its name implies, stainless steel is highly resistant to corrosion and typically stronger than mild steel. The disadvantages of stainless steel engine guards are their limited flexibility and relative brittleness. They can also crack at the welded seams when exposed to high amounts of engine vibration.

Aluminum - While aluminum isn't stronger than mild or stainless steel, it is lightweight and impervious to rust. If you're looking for a lighter crash bar that's easier to maintain, going for aluminum may be the way to go. Be aware that aluminum engine guards tend to be more expensive than their steel counterparts. 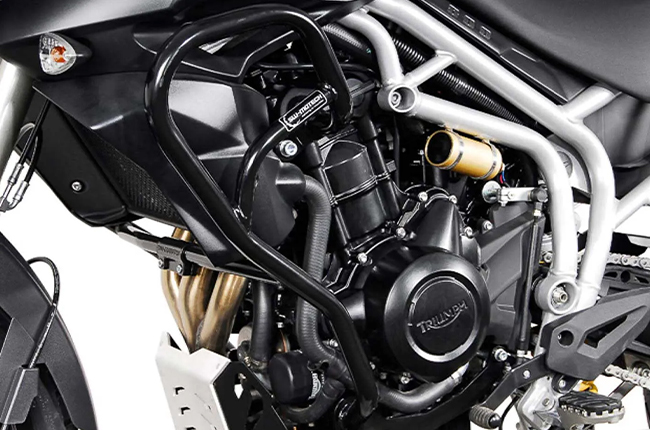 Learning about how a crash bar works is well and good, but the question remains: “Are they really effective?”

The answer is, it depends on what you're looking to get out of the crash bar. Installing one to protect the engine, fuel tank, body panels, and other sensitive parts of the motorcycle can be a good investment. However, if you're buying one expecting that it can save your life during an accident, then you may be looking in the wrong place.

While there's some evidence that crash bars can prevent lower leg damage during a fall, this is not guaranteed. Riders are better off learning to ride safer than putting their lives in the hands of a crash bar. Nonetheless, engine guards can be useful, and when used properly, they can protect your motorcycle from some forms of damage.

When buying a crash bar, try to avoid one-size-fits-all products that are claimed to be effective for any type of bike. The best crash bars are the ones that are designed and engineered specifically for each motorcycle.

Should you get a crash bar for your bike?

So, should you bite the bullet and get a crash bar for your motorcycle? As we've covered, you should consider a variety of factors before deciding to invest in one. Know what you’re buying the product for and what its limitations are. A crash bar can usually protect the engine and fairings to some degree when the bike tips over at lower speeds.

If you're looking to get one thinking it will save you from being thrown off your bike, you should probably look elsewhere. Crash bars are most effective when they do what they do best: protect the motorcycle.