One of the few aspects of motorbikes that has mostly remained the same is the dependable manual transmission. The manner of controlling a motorbike with a manual transmission—whether it has a five- or six-speed gearbox—is essentially the same: a left hand-activated clutch and a left foot-activated gear shift. Now, while the manner of shifting into and out of gear and actuating the clutch might differ, they are essentially the same processes.

The new Yamaha YZF-R15M is one of a select few high-end entry-level motorbikes that includes what is known as an assist slipper clutch. This technical advancement has its origins in motorsports and has already started to appear on most bikes with manual transmissions. Now, a slipper clutch offers a number of advantages. L et's examine this practical and convenient feature in more detail.

What is a slipper clutch? A slipper clutch, as the name implies, permits a little amount of clutch slippage to lessen driveline lash and jarring vibrations, especially while downshifting. As it turns out, performing a smooth downshift rev match involves a lot of expertise; failing to do so might, at best, be very uncomfortable and, at worst, result in a collision because the back wheel locks up when the vehicle decelerates.

Having said that, a slipper clutch may be seen as a safety feature that can smooth out the clumsy clutch inputs of novice riders. It is also a technological advancement that enables intermediate riders to maximize the motorcycle's gearbox, particularly in aggressive riding conditions such on the track or on winding roads.

The technology behind it 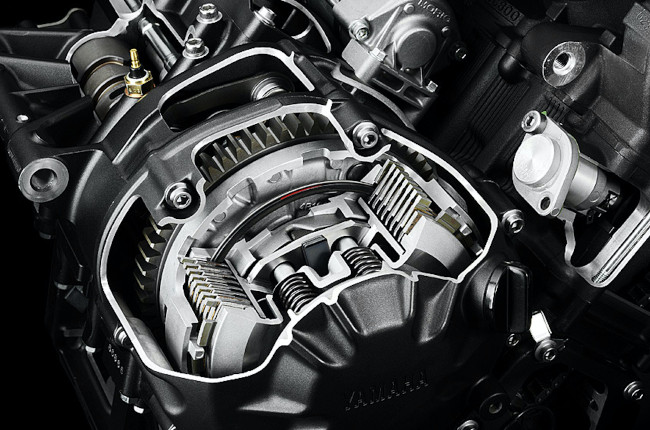 A slipper clutch has a complicated design that permits the clutch to partly disengage should the force of engine braking overload the clutch pack, unlike a traditional clutch that entirely depends on the rider's inputs to engage and disengage the clutch discs with the pressure plate. Ramps that are machined into the pressure plate and inner clutch basket are used in its design.

The ramps, on the other hand, allow the discs to partially disengage from the pressure plate when the speed of the wheels is much faster than the speed of the engine (i.e., in a sloppy downshift scenario or when shifting down two or more gears with insufficient rev matching). This causes a slipping effect, which in turn lessens and smooths out the effects of sudden, jerky engine braking. Conversely, these ramps force the clutch discs and pressure plate to mechanically push against each other while the clutch is engaged and the engine is moving the transmission. This allows the manufacturer to use lighter clutch springs, thereby resulting in a lighter pull at the lever.

How does it affect your riding? As you can see, it's very obvious that a slipper clutch offers a wealth of benefits to riders of all skill levels. A slipper clutch lessens the wear and tear on the engine by acting as a kind of damper between the gearbox and engine, which would otherwise be purely dependent on the rider's inputs, in addition to lessening the quick and rapid impacts of engine braking by downshifting. Finally, the use of lighter clutch springs is made possible by the addition of a slipper clutch to a motorcycle's transmission. This causes a lighter clutch pull, which translates to easier clutch modulation and reduced rider stress, particularly on lengthy journeys or in congested areas.