Pinoy motorcycle enthusiasts have long since had a penchant for sporty, performance oriented machines. Perpetuated by the global racing culture, sportbikes are extremely popular for a number of reasons—their styling, performance, and even their exhaust note. However, not all riders are capable of handling the amount of power a sportbike like the Kawasaki ZX-6R can churn out.

Luckily, Kawasaki also makes a true, track-focused machine which isn’t as intimidating as the ZX-6R, yet gives riders who are serious about track riding the perfect tool to develop their racing skills on the race track. Yes, we’re talking about none other than the Kawasaki ZX-25R, Team Green’s inline-four, quarter-liter sportbike. Let’s take a look at this bike in greater detail, and pinpoint the top 5 things we love about this sporty machine. While you may scoff when you find out that the Kawasaki ZX-25R only has an engine displacement or 250cc, you’ll be surprised to know that this tiny little motor packs quite a punch—51 horsepower to be exact. That’s more power than the Honda CBR500R, or even its own stablemate, the Ninja 400, despite its engine being only a fraction of the size.

You see, the ZX-25R is equipped with an inline-four engine which howls like a banshee at the upper reaches of the rev range. Revving all the way to a glorious 15,500 rpm, the Kawasaki ZX-25R sounds like a purebred racing machine, and its exhaust note alone is more than enough to turn heads no matter where you go.

4 tips to keep your brakes in tip-top shape Unlike the other Ninjas in Kawasaki’s stable (i.e., the Ninja 400 and Ninja 650), the ZX-25R was designed to deliver uncompromising handling on the race track. As such, it comes equipped with premium underpinnings which consist of adjustable inverted front forks and an adjustable rear monoshock. This setup allows the rider to tweak suspension settings according to track conditions, personal preference, and the type of riding he or she intends to do.

Braking hardware is also amped up on the ZX-25R. While it does come with only one front rotor, it gets a radially mounted caliper which directly results in sharper braking feedback—a vital element when you’re trying to shave milliseconds off your lap times. The ZX-25R also boasts a lightweight chassis construction which makes use of the engine as a stressed member. This drastically reduces weight while at the same time increasing rigidity, a win-win situation especially in a racing scenario. 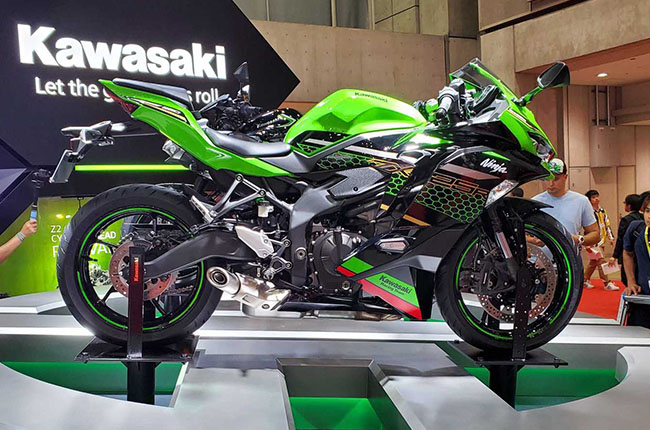 As mentioned earlier, the Ninja ZX-25R is equipped with a tiny 250cc inline-four. Although 51 horsepower is a decent amount of grunt for a bike of this size, it really isn’t enough to get even beginner riders into a lot of trouble, especially on the race track. Given the bike’s peaky power output, it delivers power to the rear wheel in a very linear fashion, making scary mishaps like rear wheel slides and high sides an unlikely occurrence.

Indeed, the ZX-25R is an excellent stepping stone for those looking to eventually upgrade into the bigger Ninjas with the ZX moniker. It opens doors to would-be racers and track riding enthusiasts to approachable inline-four performance in a true race-bred package.

Just the right amount of tech The Kawasaki Ninja ZX-25R is by no means a groundbreaking machine when it comes to outright tech. It does, however, come equipped with the basic suite of electronic rider aids you’d expect from a performance-oriented machine. As such, dual-channel ABS as well as Kawasaki Traction Control (KTRC) are present, should you ever find yourself pushing the bike beyond your skill level.

All these features can be toggled via the bike’s LCD multi-information instrument panel. Kawasaki has also equipped the ZX-25R with two selectable power modes—one for general street duty, and another for performance-oriented riding which unlocks all of the engine’s power. Simply from its name alone, it’s clear that the Ninja ZX-25R is a special bike, and not just your run of the mill Ninja. The smallest bike in the Ninja ZX model range, its stablemates consist of the bigger and more powerful Ninja ZX-6R, and the WorldSBK-derived Ninja ZX-10R. This gives this quarter-liter sportbike undeniable race-bred heritage, making it one of the best beginner-friendly options for those looking to get into track riding more seriously.

The Kawasaki Ninja ZX-25R stands unrivaled in the market. No other motorcycle currently available offers a quarter-liter inline-four engine in a lightweight, track-oriented package. Available at a price tag of P410,000, the ZX-25R isn’t a cheap bike. However, it’s premium price tag is more than justified by its overall package.