When you think about some of the world’s fastest motorcycles, chances are supersport bikes like the BMW S 1000 RR, or perhaps the legendary Suzuki Hayabusa come to mind. While these bikes definitely sit in the upper echelons of performance, there’s no denying that Kawasaki has been the undisputed king of the fastest production motorcycle with the revolutionary Ninja H2 R. With more than 300 horsepower on tap, the Ninja H2 R has held on to the title of world’s fastest production motorbike for nearly half a decade now.

That being said, the Ninja H2 R does have one major drawback—it isn’t street-legal. No need to worry, though, as Kawasaki has recently revealed the updated version of the H2 R, the Ninja H2. Although not quite as fast as the track-only H2 R, the Ninja H2 still packs quite the punch, making it one of the fastest road-going machines out there. Here are a few things we love about this bike. 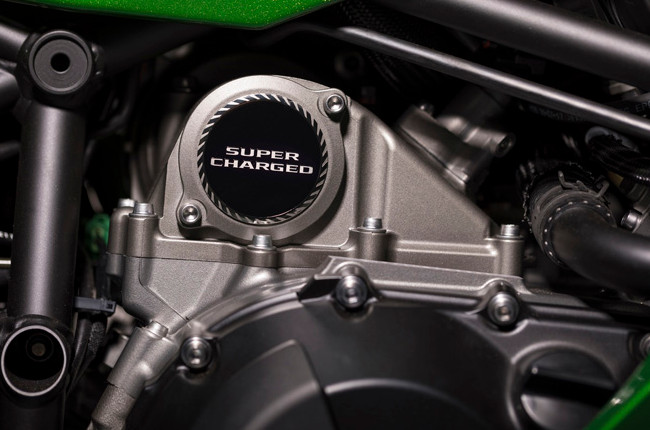 The Kawasaki Ninja H2 is equipped with a 998cc inline-four-cylinder engine. Now, this is all well and good, and is very much similar to other liter-class sportbikes, right? Well, yes, but it also comes with a supercharger. That’s right, the Ninja H2’s supercharged engine optimizes power and torque all across the rev range giving it impeccable throttle response and a power output that’s instantly accessible, no matter where you are in the rev range. In total, the 2022 Kawasaki Ninja H2 spits out a fire-breathing 243 horsepower and at 11,500 RPM thanks to its Ram-Air intake.

Would the Kawasaki Ninja 125 be a good beginner sportbike in the Philippines? Apart, of course, from this bike’s otherworldly performance, it also puts on quite the show, especially when fitted with a masterfully engineered aftermarket exhaust. Apart from the distinct banshee-howl of the 998cc inline-four-cylinder engine, the Ninja H2’s supercharger also makes a very distinct “wa-pish” sound, every time you let off the throttle, or shift up via the bike’s built-in bidirectional quickshifter. Unlike a turbocharged car, the whooshing sound from the H2’s motor isn’t from a blow-off valve, but rather from the sonic boom the supercharger produces simply because of how fast it’s spinning. Surely, all these beautiful sounds work together to deliver an exhilarating symphony with every twist of the throttle. As expected, from a motorcycle of this caliber, Kawasaki has fitted it with loads of electronics in order to keep all the power at bay. This isn’t really surprising, as 243 horsepower is something even intermediate riders may struggle to tame if left unassisted. So, what kind of electronic wizardry does the Ninja H2 get? Well, for starters, it gets multiple riding modes and a suite of electronic assists powered by a six-axis inertial measurement unit (IMU). This device, similar to the accelerometer in your smartphone, accounts for left and right lean angle, forward and rearward pitch, and left and right yaw. This allows the bike to optimize features such as cornering ABS, traction control and wheelie control. To top it all off, the Ninja H2 boasts an up and down quick shifter, making up and downshifts a breeze, especially when attacking corners on the track. To top it all off, the Kawasaki Ninja H2’s styling is truly unique and never before seen. The bike’s sharp and angular bodywork combined with the minute details such as the exposed, green trellis frame, the angular seat cowl, and winglets integrated into the fairings, make this hypersport bike look like it’s going 300 kilometers per hour just sitting still. Other thoroughly premium features such as carbon-fiber accessories, LED lights, and its full-color TFT instrument panel, continue the delight as you take a closer look at the bike