The sportbike is well and truly near and dear to the heart of the Filipino motorcycle enthusiast. Bringing the thrill of racing and packaging it into a motorcycle suitable for daily use, sportbikes tend to capture the senses in ways no other motorcycles are capable of doing so. As such, it isn’t really surprising that the sportbike has become the benchmark for performance-oriented big bikes, especially in the Philippines.

While MotoGP and WorldSBK machines feature power figures and ergonomics which would make even the most seasoned riders think twice of riding them on a daily basis, there are plenty of other sportbikes which have been designed primarily for street use. As such, these bikes offer more upright ergonomics and more tractable power outputs, making them approachable even to novice and intermediate riders. With that, let’s take a look at the top 5 best sportbikes for daily use. The first bike on our list has been making waves in the local market thanks to its affordable price tag and impressive performance. The CFMOTO 300SR delivers 300cc performance at a 150cc price tag. Undercutting the price point of some Japanese 150cc street bikes, the 300SR boasts irresistible value for money, and stunning looks to boot.

Equipped with a 292cc liquid-cooled, fuel-injected, single-cylinder engine, the CFMOTO 300SR churns out a healthy 29 horsepower making it quite the peppy little sportbike. Thanks to its rather small dimensions, the 300SR is very nimble and lightweight, making it easy to ride on a daily basis. It’s equipped with loads of premium features, too, such as LED lights and a fancy full-color TFT display—all for just P165,000.

5 things we love about the CFMOTO 300SR The next bike on our list is the slightly more powerful and premium Yamaha YZF-R3. This bike is Yamaha’s entry-level multi-cylinder sportbike which sits above the commuter-oriented YZF-R15. Equipped with a sleek, aerodynamic full fairing, the bike is the perfect entry-level sportbike for riders looking to go down the sportbike route.

Although not expressway-legal, the R3 packs quite a punch out of its 321cc parallel-twin engine. With 41 horsepower on tap, and a slick 6-speed manual transmission, the YZF-R3 delivers an exhilarating dose of performance. The YZF-R3 is equipped  with some rather premium underpinnings, as well. It gets ABS-equipped dual-piston front and single-piston rear disc brakes, as well as an inverted front fork and preload-adjustable rear monoshock. It’s priced at a beginner-friendly P259,000. The next bike on our list is a favorite among newbies as well as fans of the WorldSBK racing series. The Kawasaki Ninja 400 shares similar DNA to its race-oriented stablemates—the ZX range of Ninja sportbikes. Unlike the ZX-6R and ZX-10R, however, the Ninja 400 presents itself with a rather approachable 399cc parallel-twin engine. Equipped with electronic fuel-injection and liquid-cooling, this engine pumps out a decent 48 horsepower, making it a rather capable machine in terms of speed and acceleration.

On the tech side, however, it features rather rudimentary componentry consisting of a digital-analogue dash, LED headlights, and ABS-equipped front and rear petal disc brakes. This capable, lightweight sportbike is available in the local market for P331,000, and can be purchased in a similar racing livery as that of the WSBK Kawasaki Racing Team. 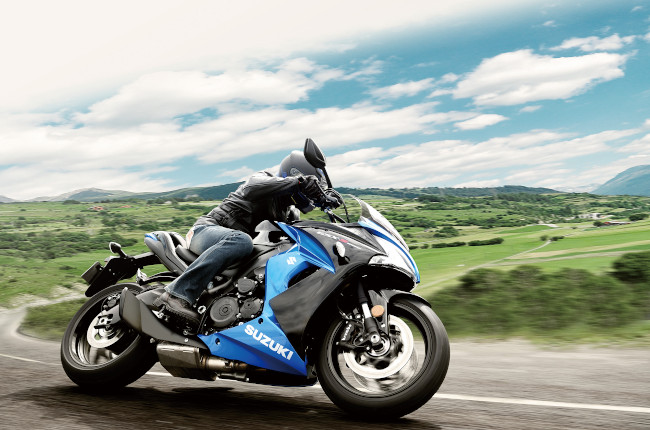 The Suzuki GSX-S1000F may look and sound like an intimidating superbike. However, beneath its full fairing and sporty styling lies a comfortable and tractable sport-tourer. You see, Suzuki has tweaked the GSX-S1000F to offer long-distance comfort at the expense of outright performance. The result is a comfortable, upright machine equipped with adequate wind protection.

It does, however, get quite the mighty powerplant consisting of Suzuki’s legendary K5 motor—a 998cc inline-four-cylinder engine which pumps out a hefty 150 horsepower—definitely not for the first-time rider. It comes at a tidy sum, too, at P734,000. The Kawasaki Ninja 650 has been around, in one form or another, for nearly two decades now. Equipped with Kawasaki’s bulletproof 649cc parallel twin engine, this bike delivers punchy performance in a reliable, dependable package. With 68 horsepower on tap, the Ninja 650 is equally at home on the open road, twisty mountain passes, or the race track.

For the 2021 model year, Kawasaki has given the bike new color options and nifty tech features such as LED lights, and even a fancy full-color TFT display complete with Bluetooth smartphone connectivity via Kawasaki’s Rideology app. This premium middleweight sportbike is available for P426,000.