No other bike has received so much hype in the past couple of months more than the Kawasaki’s ZX-25R, the Japanese brand’s little screamer with an inline-4-cylinder engine. The ZX-25R won’t even be expressway legal in the Philippines and yet, Kawasaki still did it anyway. I guess there would only be one answer — it must be that good, and it’s now in the Philippines.

The Kawasaki ZX-25R made its debut online on July 31, 2020, with the President and Chairman of the Board of Kawasaki Philippines, Hisahi Nishizawa taking center stage and introducing the archipelago to this small-displacement screamer. We’ve lengthily discussed the bike’s specifications in the past, but at least now, we officially have what’s coming to the country. It would be powered by a new inline 4-cylinder engine capable of producing 50 hp (with ram air) at 15,500 RPM and 22.9 Nm of torque at 14,500 RPM mated to a 6-speed transmission with an assist and slipper clutch for a lighter pull as well as a Kawasaki Quickshifter for even faster and smoother gear changes and even quicker lap times. Its new inline-4 engine design gives a much wider rev range of up to 17,000 RPM with lots of power delivery at its low to mid-range levels.

Damping duties will be provided by 37 mm Showa SFF Big Piston adjustable inverted forks in the front and a horizontal preload-adjustable backlink mono-shock in the rear. Meanwhile, stopping duties are done by a 310 mm brake disk with a four-piston caliper for the front and a 220 mm disc with a single-piston caliper for the rear. It also comes standard with ABS and Kawasaki traction Control (KTRC). Its dash comes with a combination of an analog tachometer with an LCD multi-info panel giving the rider all the standard gauges, readouts, gear indicator, and ride mode display. It comes with two riding modes namely, low and full. 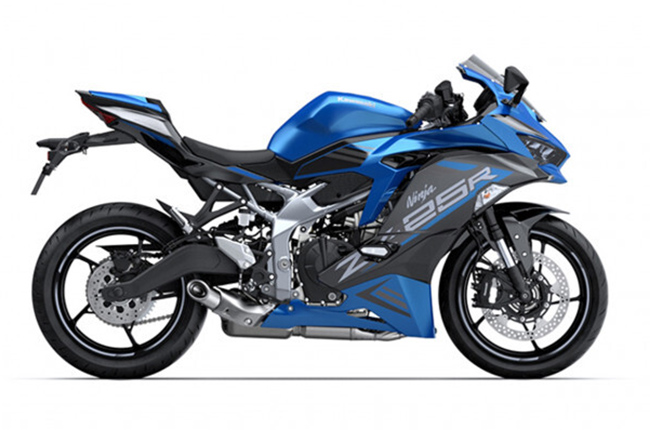 Unlike in neighboring Southeast Asian counties, we’re only getting one variant for the ZX-25R and only two color options instead of four. The Kawasaki ZX-25R is now officially priced in the Philippines at P410,000 and is available in either Lime Green (KRT) or Candy Plasma Blue. Priced significantly higher than the Ninja 400 but right below the Z650 and Ninja 650, Kawasaki has made the new ZX-25R targetted to such a niche market. Yet, we’re just as guilty of ogling over this little screamer that could probably outperform some bigger bikes on the track, and we’re glad that Kawasaki finally decided to bring it into the country.