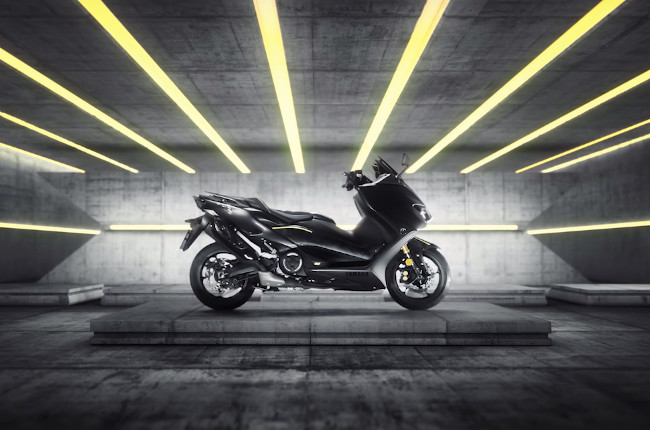 Late last year, Yamaha introduced some minor updates to their biggest maxi-scooter, the TMAX. While revisions were limited mainly to making the scooter Euro 5-compliant, the bike’s styling and overall design remained unchanged. Ever since being launched in 2001, the Yamaha TMAX has seen quite a few iterations over the past two decades. Lauded for its incredible stability, comfort, and utility, the TMAX continues to be a highly sought-after model from Yamaha. Powered by a punch 562cc parallel-twin engine, the TMAX combines the convenience of a scooter with the long-distance touring ability of a big bike.

2021 marks the 20th anniversary of the Yamaha TMAX. Aptly, Yamaha has unveiled a stunning limited-edition release to commemorate the scooter’s milestone. While mostly cosmetic, the 20th Anniversary Edition of the TMAX is a real head-turner. In a video released by Yamaha Motor Europe, the various iterations of the TMAX over the past 20 years were highlighted. The video culminates with the 20th Anniversary Edition proudly displaying a black and yellow color scheme, as well as subtle graphics highlighting 20 years of the TMAX.

Apart from the revised color scheme, the 20th Anniversary Edition boasts a premium saddle which comes with yellow accent-stitching, as well as a beautiful tuck-and-roll pattern. The special-edition scooter even comes with heated seats for both rider and passenger. Enhancements have been made to the TMAX’s instrument panel as well. Now featuring a combination of digital and analogue sections, the gauge cluster displays an abundance of information in a very neat and organized manner. The updated maxi-scooter comes with a suite of electronic rider aids consisting of traction control, ABS, and a nifty keyless ignition system.

At press time, there still isn’t any word as to whether or not the Yamaha TMAX 20th Anniversary Edition will make its way to local shores. At present, the current-generation Yamaha TMAX comes with a sticker price of P649,000.