When you take a look at Honda’s big bike lineup in the Philippines, it’s clear to see that there is a gaping hole in the 400cc entry-level big bike segment. If one were to start his or her big bike journey aboard a Honda, their first choice would most likely be in the form of the Honda Rebel 500, or the CB500X. Sport bike aficionados may be served by the CBR500R. However, when compared to its competitors, Honda’s entry-level motorcycles are rather expensive.

Motorcycles like the KTM 390 Duke, Kawasaki Ninja 400, and CFMOTO 400 NK currently dominate the entry-level big bike market in the Philippines. Now, interestingly, Honda has just launched the CB400F in the Japanese and Chinese markets. Unveiled in the recently held Shanghai auto show, the CB400F is accompanied by the more adventure-oriented CB400X. Unlike Honda 500cc motorcycles found in the local market, the new CB400F comes equipped with a 399cc parallel-twin engine. Rated for a healthy 44 hp, this lightweight naked streetfighter is right on par with the likes of other 400cc class entry-level big bikes.

Would you like to see the all-new Honda Super Cub in the Philippines? 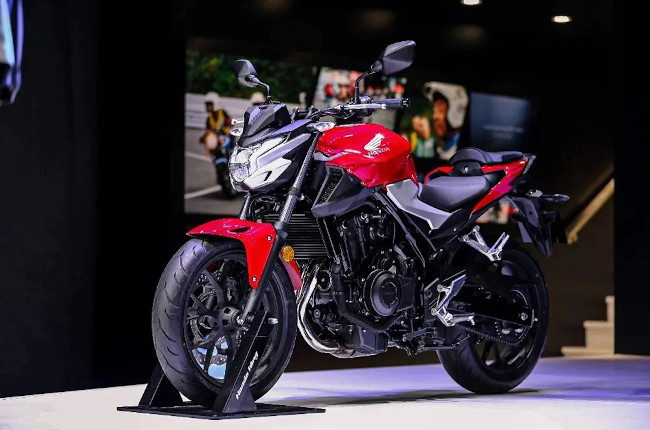 As far as styling is concerned, at a glance it is clear to see that this bike is indeed a Honda. Employing sharp yet sleek bodywork, and the unmistakable top notch Honda fit and finish, the CB400F is a truly good looking motorcycle. In the US and European markets, the Honda CB400F closely resembles that of the CB500F, a naked streetfighter with the same engine as the CB500X. Unfortunately for us, the CB500F isn’t available in the local market.

Interestingly, Honda Cars launch this new motorcycle in the Japanese and Chinese markets due to strict licensing parameters when it comes to motorcycles. In these markets, a more advanced license is required in order to operate a motorcycle with a displacement exceeding 400cc. As such, the CB400F, with its 399cc displacement, falls just shy of this limit, making it accessible to beginner riders. Do you think the Honda CB400F, or even the CB500F, has a place in the Philippine market?