In Europe and other parts of Asia, there is a broad selection of small to mid-sized scooters from premium manufacturers. For instance, Aprilia, part of the Piaggio group of companies, has a small-displacement scooter specific to the Indian market in the form of the SR 160. Retailing for the equivalent of around P90,000, this scooter would certainly carry with it some mass appeal, especially if launched in the local market. 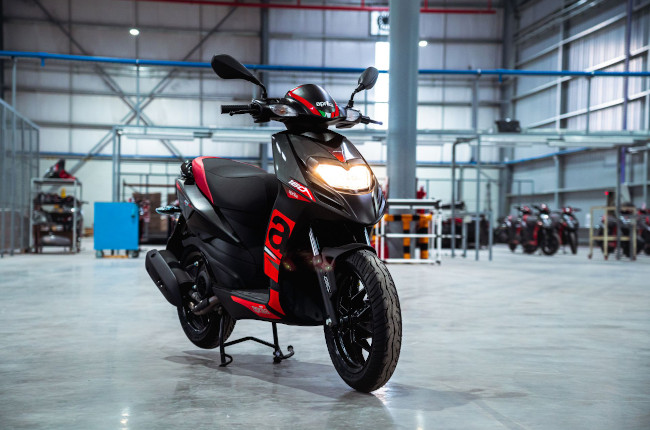 Aprilia is expected to update the SR 160 in the Indian market for the 2022 model year. If the photos are anything to go by, we certainly think that the scooter’s sporty styling will capture the attention of a good number of Pinoy motorcycle enthusiasts looking for a premium yet affordable daily runabout. For the 2022 model-year, the Aprilia SR 160 is expected to feature premium design elements such as a fully digital LCD display, as well as front and rear LED lights. Striking, indeed, is the bike’s racing-inspired livery, which clearly draws inspiration from the Aprilia RS-GP racing machine we see the Italian company compete with in the MotoGP.

From a performance standpoint, the Aprilia SR160 packs a 160cc, single-cylinder, fuel-injected engine capable of producing around 11 horsepower. This economical power plant is mated to a conventional CVT automatic transmission, and is capable of propelling the SR 160 to a top speed of a little over 100 kilometers per hour. Although only available in India, the SR 160’s technical specifications certainly make it look like the perfect commuter for the Philippine setting. It’ll certainly make for a decent entry-level option in the small-displacement scooter segment for the Piaggio Group—a space which is currently only occupied by Vespa and its pricey scooters which are beyond the reach of a lot of commuters.