When you think of Kawasaki, the bike that probably comes to mind is the Ninja. The Kawasaki Ninja is a motorcycle that has gone down in history as one of the most instantly recognizable motorcycles in the world. In fact, the term ‘Ninja’ has become something of a generic term among non-motorcyclists when referring to a sportbike. Similar to how Colgate, Canon, and Xerox have become colloquial generic terms in their respective industries.

Having said that, it’s not really surprising that Kawasaki has done very little to change the Ninja over the past few years. After all, if it ain’t broke, don’t fix it, right? Well, one area in which Kawasaki is working hard on is the dual-sport and adventure segment. In fact, the Japanese company recently sought the help of the talented minds at the Institute of Applied Art and Design (IAAD) based in Torino, Italy. Kawasaki requested the designers of the IAAD to help them flesh out innovative new concepts which could then be applied to future models. The result is nothing short of stellar. 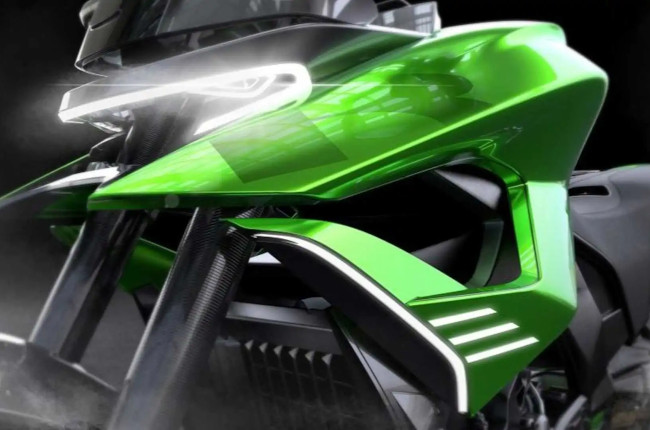 Dubbed the Kawasaki Adaptive, this theoretical motorcycle has the ability to adapt its configuration based on its surroundings. Now, the details aren’t exactly clear-cut as of yet, since the bike is merely a concept. However, imagine a motorcycle that has the ability to alter characteristics such as ride height, wheelbase, and even ergonomics depending on the terrain being covered. This is what Kawasaki hopes to achieve with the Adaptive concept.

While all of this may sound thoroughly exciting, there is one caveat, however. Alas, Kawasaki has stated that the Adaptive concept isn’t to be slated for production. However, it did say that the technology has the chance to be developed and integrated into future models—say, a future iteration of the Kawasaki Versys adventure-tourer.

“The Adaptive has innovative design, attention to details, first-rate technology for a concept that does not go unnoticed, rather that evolves and adapts to the roads in front of it. Working with new and fresh ideas is always a pleasure and the guys (IAAD) have done their job in an excellent way, so many stimuli that will be a suggestion for Kawasaki’s team of designers in the motorcycle department.”
Sergio Vicarelli
Sales Director, Kawasaki