Motorcycles and movies, we all love them. Tom Hardy had the Ducati Scrambler in “Venom”, Keanu Reaves rode the Yamaha MT-09 in “John Wick 3 Parabellum”, and Tom Cruise was sporting the BMW R nine-T in “Mission Impossible 6:Fallout” proving action movies can serve as a great marketing tool for famous motorcycle brands. Triumph didn’t sit back in capitalizing on the mileage it can get from Hollywood films, and they did so with their motorcycles appearing in “Harley Quinn: Bird’s of Prey” and now, the new James Bond film “No Time to Die”. 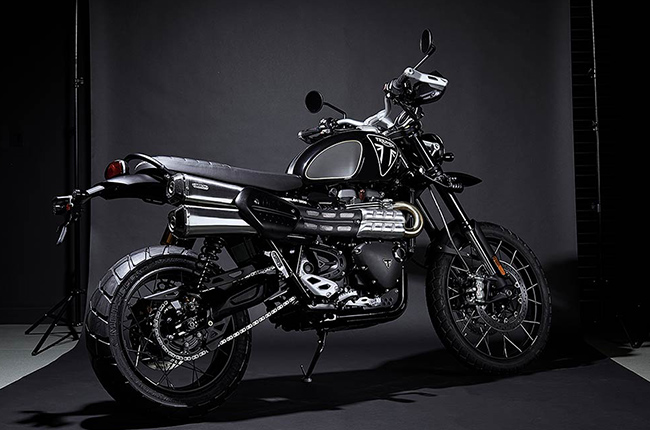 Triumph had collaborated with the movie’s stunt team to configure a specially prepped Tiger 900 and a Scrambler 1200 XE to star in a carefully choreographed action sequence from the upcoming movie. Now, Triumph is accepting pre-orders of this limited-edition motorcycle from the public. The ultra-rare Bond Edition motorcycle is gonna be limited to a production run of only 250 units worldwide. Inspired by the custom Scrambler 1200 outfitted for No Time to Die. With blacked-out details all throughout its bodywork including its anodized rear fender, grab rail, and sump guard, with a cool black fork framed by a high-mounted black anodized front fender and a black powder-coated swingarm and sprocket cover. It also features a premium high-mounted Arrow muffler with carbon-fiber end caps and a stainless steel headlight grille for true scrambler sensibilities. It is also fitted with a premium fully adjustable twin-spring Öhlins rear suspension units with piggyback reservoirs, along with Brembo M50 radial Monoblock calipers, adjustable folding foot controls, tubeless tires, and a spoked 21-inch front wheel. You would find the 007 insignia visible on the exhaust’s number board and lower side panel finisher as well as its TFT instrument startup screen. The motorcycle follows the same specifications as the Triumph Scrambler 1200 XE which is powered by a 1,200 cc parallel-twin engine that can deliver up to 89 hp and 110 Nm of torque. It also is equipped with six riding modes which include Off-Road Pro, as well as Road, Rain, Off-Road, Sport, and Rider-Configurable, each of which adjusts throttle response, ABS settings, and traction control setting to suit the rider’s preference. While we haven’t received word yet from Triumph’s exclusive local distributor, the James Bond Edition Triumph Scrambler is available to order worldwide with a price starting at $18,500. We can expect its local price to be a little bit higher than the Triumph Scrambler 1200 XE’s price of P1,195,000.