Maxiscooters could be an excellent means for more than just getting around town, but also going the distance for those longer hauls. Problem is, in the Philippines, the 400 cc restriction would still stop certain smaller motorcycles from entering the expressway, and this does not bode well for the 300 cc and above scooter segment, or maxiscooters. While generally, they are designed for long-distance riding, the restriction can be the reason for their low sales figures in the country. Nevertheless, in Europe, it’s a different story. The comfort, convenience of an automatic transmission, and more storage space of a bigger scooter make them a huge hit. Honda now offers the new 2020 Honda Forza 300 as its latest addition to the maxiscooter segment. The new Honda Forza 300 now has an updated look and style designed with aerodynamic efficiency. The body lines seamlessly integrate into various storage compartments found throughout the body. Unlike most scooters, the under-seat storage can easily fit two full-face helmets. It can also be partitioned to store a helmet and/or rain gear and A4 sized bags. An optional top-case can be installed which would match the scooter’s body color to give you even more storage options. It now features a retractable wind visor that can be activated and adjusted via a toggle switch located on the left handlebar. 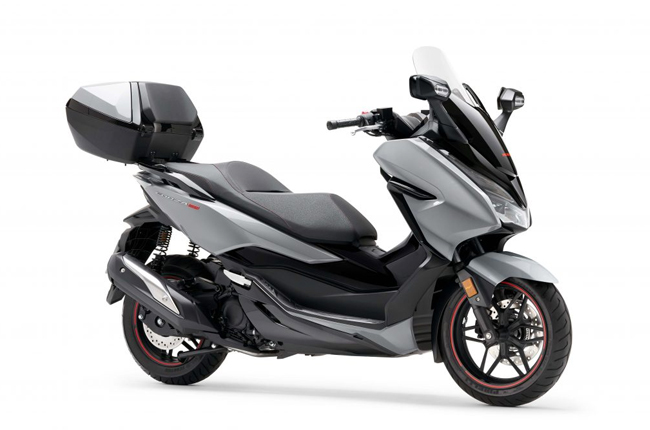 Power delivery is made by a 279 cc, liquid-cooled fuel-injected SOHC four-valve engine capable of producing 19 hp with 27.2 Nm of torque at 5,750 rpm. The engine is mated to a V-Matic transmission through an automatic centrifugal clutch and belt final drive. It is capable of reaching a top speed of 129 km/h and fuel economy of 31 km/l. With a fuel capacity of 11.5 km, a full tank can give you a potential range of more than 350 km. Safety features include Honda Selectable Torque Control (HSTC) which detects differences between the front and rear wheel speeds, calculates the slip ration and then controls engine torque via fuel injection, effectively gaining rear wheel traction. ABS on both front and rear disc brakes come standard.

Color options of the new 2020 Honda Forza include Crescent Blue Metallic, Pearl Nightstar Black, Matt Cynos Grey Metallic, Matt Pearl Cool White and a special limited edition Air Force Grey. Whether this bike gets to land on our shores, we can't speculate just yet. In our opinion, maxiscooters such as the Honda Forza should be given a second look.