Motorcycle art, two words that MV Agusta has successfully claimed to embody the design philosophy of its motorcycles. They’re gorgeous to look at with barely a single flaw from almost any angle. On June 30, 2020, MV Agusta invited members of the press to a virtual launch of its latest hyper naked offering, the Brutale 1000 RR. The new Brutale 1000 RR offers confidence-inspiring performance with its design giving you better ease of use as well as power on demand. MV Agusta’s designers made sure that with the Brutale 1000 RR, its customers would have the best possible mix of technology, style, and ease of control in a hyper naked package that you won’t get tired of staring at. They achieved this goal by bringing the best out of its chassis, engine, electronics, all while making sure that the bike is easier to use for the rider along with the exceptional performance levels that the Brutale 1000 RR is known for. In other words, they want the handling of this hyper naked to suit every possible rider, from the newbie to the more experienced. Its design features tight lines and forms perfectly integrated between the front and the rear of the bike giving it an aggressive silhouette with the distinctive trait of the four-cylinder Brutale, right from the first iconic model that relaunched the MV Agusta brand. It features a new redesigned headlight, fuel tank, and tail fairing specially made for this new Brutale. Its headlights feature an internal colored X-shaped section which is enhanced by its Daylight Running Lights. It also comes with cornering functions that allow better illumination based on the direction, angle, and dynamic position of the bike. It also features a brand new 5” TFT display color panel as the main interface between the rider and its settings via BlueTooth connectivity. Its functions can be navigated on the fly with its handlebar controls allowing you to have access to navigation, calls, messages, and music. The Brutale 1000 RR also comes with Cruise control which is a welcome feature for a hyper naked with this much power. The Brutale 1000 RR’s engine is the latest evolution of MV Agusta’s engine design. It is powered by a 998 cc in-line four-cylinder engine capable of churning out a whopping 208 hp at 13,450 RPM and 116.5 Nm of torque. Its radial valve timing and central timing chain were both inspired by F1 and MotoGP technology contributing to the reduction of mass, loads, and inertia of the engine and giving it its distinctive MV Agusta engine howl. Because of all of this, the Brutale 1000 RR’s engine makes it capable of reaching top speeds of over 300 km/h. 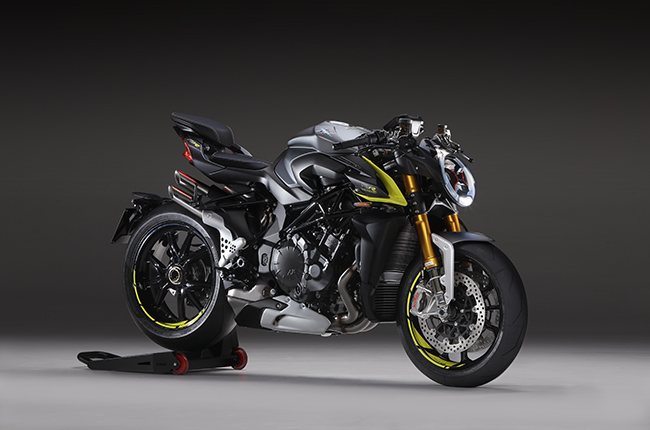 Stopping duties are provided for by 320 mm floating discs with radial calipers up front and a 220 mm rear disc with a dual-piston caliper, both by Brembo. It comes standard with Bosch 9 ABS system with selectable Race Mode.

The good news is, Motostrada, the exclusive distributor of MV Agusta Philippines has confirmed that the Brutale 1000 RR would be arriving in Philippine shores real soon with a price tag of P2,000,000. We look forward to seeing this gorgeous hyper naked in the metal at its showrooms, or on the road.