The LTO has just released a thirteen-page document containing the implementing rules and regulations for RA 11235 otherwise known as the Motorcycle Crime Prevention Law. Motorists have known the RA 11235 more as the “Doble Plaka Law” and its primary author, Senator Richard Gordon has faced a lot of criticism for the legislation from a number of concerned motorist groups. In any case, now that that the LTO has released its IRR, its final clause stipulates for its immediate effectivity.

RA 11235 was signed into law on March 8, 2019. One of its most controversial provisions which caused the ire of criticism from numerous motorist groups was its mandatory requirement for all types of motorcycles to have bigger number plates in the front and the back, as well as the stiffer penalties imposed for its non-compliance. Section 5 of the IRR reads, "The LTO shall issue a set of bigger, readable, and color-coded number plate for every motorcycle, which shall consist of a.) a metal number plate to be installed at the rear of a motorcycle, and b.) a decal number plate to be displayed in its front. It shall bear a unique combination of alphanumeric characters using the following format: ABC123." The IRR describes the front decal plate to be made from a sticker like material which will have the measurements of 135mm wide and 85mm tall. For reference, it’s about the size of an iPhone X smartphone. The IRR also provides for the specifications for the rear plate to be made of “suitable and durable aluminum substrate material”, with measurements of 235mm wide and 135 tall which is about the size of an iPad. Violators would be required to pay a hefty fine amounting to P50,000 to P100,000 or face imprisonment.

Yet, the question still remains, will RA 11235, with the installation of bigger and more visible plates be an effective means to prevent the crimes that the law seeks to address with its enforcement, or will it actually be an effective deterrent for perpetrators to make use of motorcycles as intended by the law. 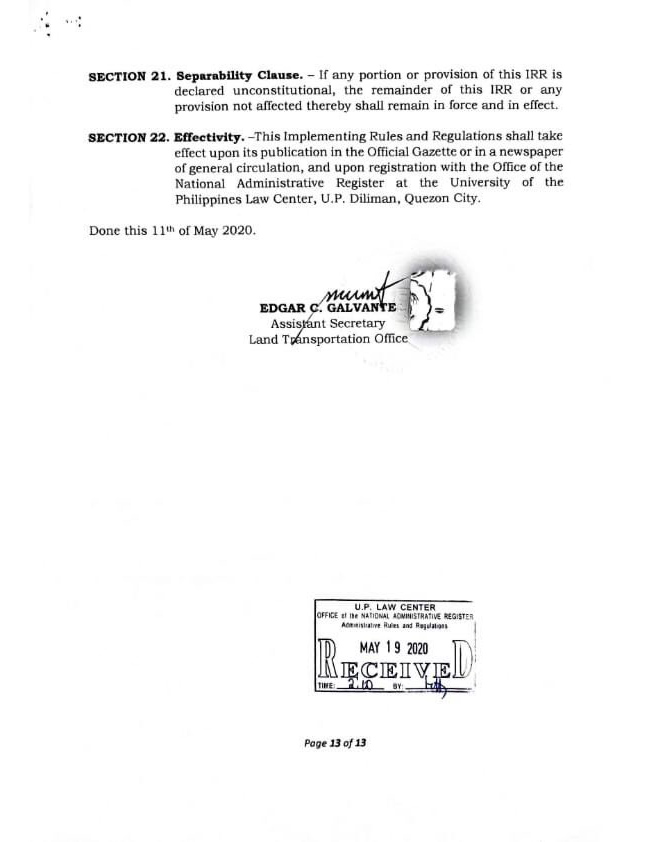