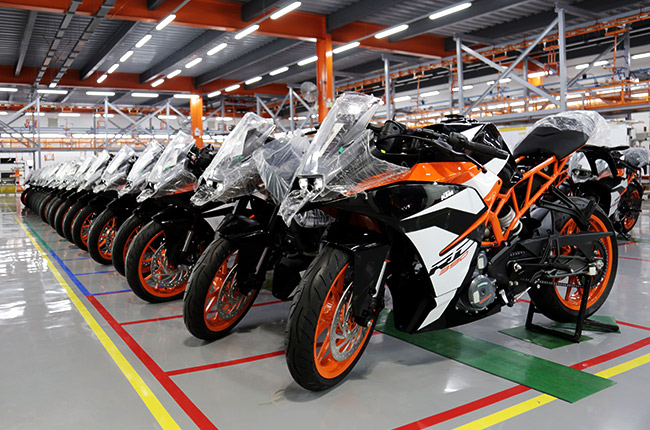 KTM Asia Motorcycle Manufacturing, Inc. (KAMMI) inaugurated its 'state-of-the-art' manufacturing facility at the Laguna Technopark in Sta. Rosa, Laguna. It will handle the production of the 200 Duke, 390 Duke, RC 200, and the RC 390.

KAMMI is a joint-venture partnership between AC Industrials' Adventure Cycle Philippines, Inc. under the Ayala Group of Companies, and Austrian motorcycle brand KTM AG (Kronreif & Trunkenpolz Mattighofen AG). It aims to initially produce 6,000 bikes, with a goal of expanding to 10,000 units per year in the future. KAMMI said that it takes around 40 minutes to produce 1 KTM motorcycle. Currently, the company has already produced 500 units of locally manufactured KTM motorbikes.

This investment is part of our belief that manufacturing should be a key driver of our country’s inclusive growth going forward. It provides jobs, supply chain opportunities, and helps put the country in the map as a center for innovation and industrialization,” said KAMMI president and COO Dino Santos.

While local production is aimed directly to the domestic market for now, KAMMI plans to export motorcycles to nearby ASEAN markets, as well as China where 60 million of bikes are sold annually. Santos said during the opening ceremony that KAMMI will begin exporting motorcycles to China by the end of 2017. He added that the company is looking to export Philippine manufactured KTM motorcycles to the ASEAN market by early 2018. This means that KAMMI’s plant in Sta. Rosa, Laguna will be the main production hub of KTM motorcycles in the ASEAN region.

As of this writing, KAMMI has 21 dealerships nationwide. They are looking to increase their network to 32 dealers this year.