While KTM Philippines has the 790 Duke readily available at dealers and enjoying local manufacture, the rest of the world seemed to move on with the 890 Duke and its racier cousin the 890 Duke R. It appeared that the 790 Duke was almost forgotten. However, news came through about Team Orange reviving the original scalpel for the European market.

There’s a push into the middleweight segment once again this year. Suzuki and Honda unveiled 700 to 800cc models, the GSX-8S and the CB750 Hornet respectively. It seems that KTM has taken notice of the other brands’ models and updated its street bike lineup with a refreshed 790 Duke as a result.

Here are more details about KTM’s investment in MV Agusta KTM will be bringing back the 790 Duke for the European market with a slightly detuned motor and A2 compatibility. The updated Duke’s 799cc parallel-twin engine will make 95 hp, which is 10 horses down from the standard 105 hp, and it will fill a core gap in the global market. The 790 Duke was discontinued in select countries, but it continued to be a flagship middleweight offering in markets like ours for quite some time.

While the 790 Duke was discontinued, it meant that European KTM fans who were coming from a 390 Duke or RC 390 had only one other engine option in the lineup with more than double the engine displacement. Now with the 790 Duke back in the picture, the upgrade doesn’t seem as big of a leap. On top of that, KTM has also advertised A2 compatibility, which will allow A2 riders to saddle up and grow into their 790 with full power once the time is right and once they get the A license in Europe. On top of the announcement, KTM has also updated the colors and decals of the 790 together with a brand-new white and orange colorway, which we could see in the Philippine lineup in the near future, but nothing’s certain for now. 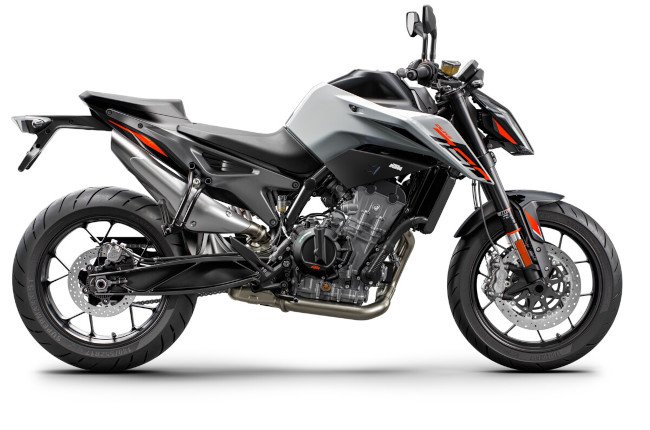 European KTM 790 Dukes will come from its partner in China, CFMOTO. The Chinese brand will also be fielding its middleweight naked bike in the near future, the CFMOTO 800 NK which will use the KTM 790 series engine as well, similar to what it did with the 800 MT adventure tourer.