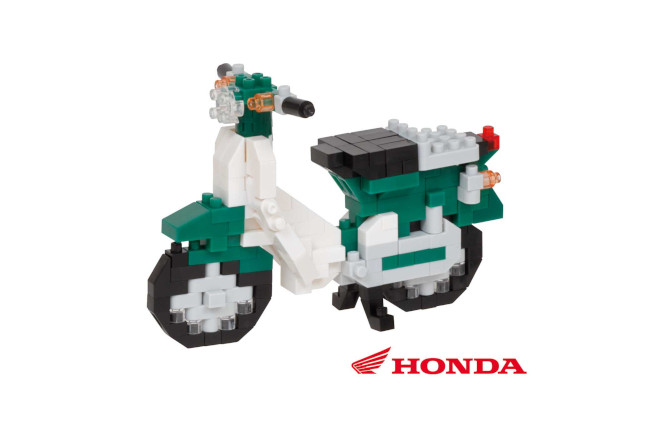 It’s not uncommon to see motorcycles in toy stores. After all, budding enthusiasts must start somewhere, right? Some of us at the office started out collecting toy cars and bikes then moved on to the real deal when we got old enough.

Honda will partner with Nanoblock, a Japanese toy company that specializes in miniature toy brick sets akin to Lego, but not really. The latest rendition will be of the venerable Honda Super Cub.

You could say that the Super Cub was the forefather of all Honda scooters in the world today. Adopting friendly ergonomics and a frugal yet capable single-cylinder motor, the scooter is recognized as the most produced motor vehicle in history, overtaking cars and other forms of transportation.

Introduced in 1958, the actual unit shares some features with several underbones in the Honda lineup like the Wave series of bikes. Unlike the Wave, you get a front leg guard that still is a design feature commonly found on automatic scooters.

The icon’s block recreation from Nanoblocks is a 200-piece kit that will come with either navy blue or green, true to the original colorways of the Super Cub. There is a surprising amount of detail in the kit, you get a center stand, and even the muffler is detailed with tiny-tiny blocks. The proportions of the Cub are also on point, and so is the very friendly flat seat design of the scale model. As for the toy’s size, it comes in at just 43 mm by 73 mm by 84 mm.

As for price, the kit retails for a low price of about P500, or ¥1,045 JPY. Like the bike itself, getting the toy shouldn’t cost an arm and a leg, and unlike the real deal, anyone of any age can enjoy this motorcycle.