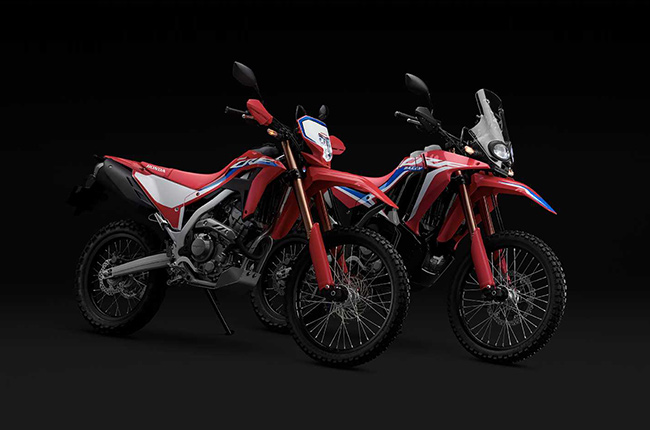 Before its November 13, 2020 launch date, we've been given a sneak peek at the new 2021 Honda CRF250L and CRF250L Rally motorcycles on Honda's Japanese website. The image was published on their site with the two bikes lined up side by side. The two pictures posted to give us a good look of the bikes side by side sporting a new livery for the new model year.

At first glance, there appear to be a few changes made to both bikes. The CRF250L gets a new cowl, heat shield, and ankle plate. You also get a pair of handguards that are color-matched to the body. Upon closer inspection, one may find side covers and a sump plate. Meanwhile, the CRF250L Rally gets a couple of notable upgrades like a slightly taller windscreen, heat shield, ankle plate, and side covers. You still get the uneven or asymmetrical dual headlights for this model year.

For more minute and performance-oriented changes, Honda also claims that the new CRFs will come with a lighter and more rigid chassis as well as an improved suspension. The brand claims that these upgrades will enhance the bikes' on-road and off-road versatility. As for changes made to its powertrain, Honda states that the intake and exhaust systems have now been optimized the meet the Euro 5 emissions standard. There was no mention of a bump in power and torque, and just for reference, the current locally-available CRF250L and Rally produce 23 hp and 21.3 Nm of torque. Models in Europe are rated at a slightly higher 24.8 hp and 22.6 Nm of torque. It is likely that models could come with the same horsepower and torque figures once the update makes its way over to our archipelago, or we could get a slight bump in power.

Honda Philippines hasn't alluded to a launch just yet. There is also the other change to the CRF lineup in the form of a name change. Rumors coming out of Japan have suggested that Honda is planning to rebrand the CRF250L as a small Africa Twin. That doesn't appear to be the case just now, however it could create more noise for the CRF line and open the gates for more people who want a more branded or specialized adventure motorcycle. We'll just have to wait and see until the official launch of these two bikes from team red.