After much fanfare and anticipation surrounding an upcoming sporty motorcycle from iconic American manufacturer Harley-Davidson, a new bike has, finally, officially been revealed. Sporting the all-new 1,250cc Revolution Max engine found in the Pan America, the MoCo has officially pulled the covers off the new Sportster S. The new Harley-Davidson Sportster S is the sportiest iteration of the legendary motorcycle to date, and is H-D’s attempt at attracting new, younger riders into the fold.

At a glance, the Harley-Davidson Sportster S employs styling cues from different genres of retro-style motorcycling. It’s silhouette is clearly that of a muscle cruiser, however, inspecting its finer details, we find an upswept exhaust akin to that of a flat-tracker. Its tail section, too, is reminiscent of that of a café racer, while its robust suspension components scream high performance, sporty riding. The Sportster S comes equipped with some meaty tires on both ends, too, which really give the bike a custom aesthetic. 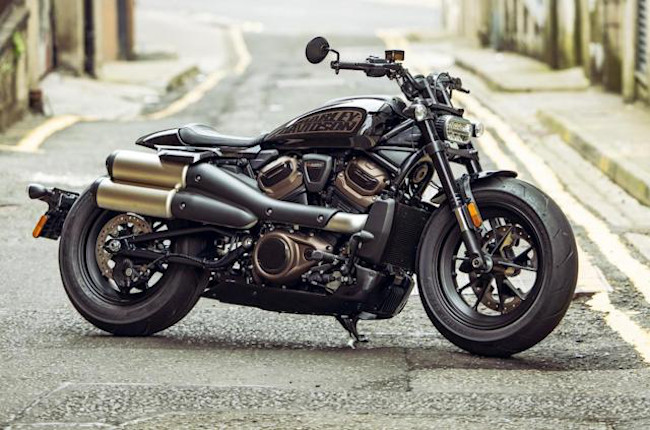 At center stage on the new Harley-Davidson Sportster S is the Revolution Max 1,250cc engine. This powerful mill is a liquid-cooled 60-degree V-twin similar to that we find on the Pan America adventure bike. Delivering a power output of 121 horsepower and 94 ft-lbs, it’s been slightly detuned for a more relaxed ride for the Sportster S. For reference, on the Pan America, the Revo Max pumps out 150 ponies.

The integration of the new Revo Max engine into the new Sportster S is important for Harley-Davidson, in particular, the aging Sportster model range for many reasons. For starters, it’s the first time we’re finding a liquid-cooled motor in a Sportster. Additionally, it’s a clear indication of Harley-Davidson’s commitment to innovation and delivering new and exciting products catering to the next generation of motorcyclists—something we weren’t too certain about the MoCo just a couple of years ago.