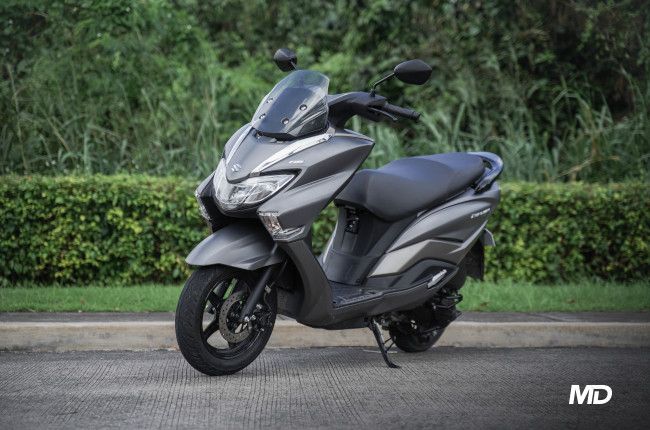 Suzuki is going full throttle into an electric future with the introduction of a battery-electric Suzuki Burgman scooter. The Japanese motorcycle maker has published several patents relating to an electric scooter, and test models have been spied on as far back as 2020. The evidence appears overwhelming, and there’s no other logical conclusion than Suzuki working on an electrified version of the Burgman. And not just any Burgman, but the Burgman Street currently available in the Philippines as a gas-powered model.

The Japanese patents show a scooter design eerily similar to the 125cc Burgman Street. It features the same steel frame but with major alterations to the motor’s layout. The electric version fits its motor into the chassis instead of the swingarm, making it more akin to a motorcycle than a scooter. Suzuki has opted for an AC motor here, along with a DC-AC inverter and a DC-DC converter to get the voltage to an acceptable level. It’s a fixed battery, too—a curious decision by Suzuki as most of its rivals, including Honda and Yamaha, have agreed to set a swappable battery standard for their models.

The fixed battery likely means Suzuki’s electric scooter will feature more range than a battery-swappable model, although riders will have to make do with charging their unit when it runs out of juice.

As of now, there is no set release date for Suzuki’s electric scooter, but we feel the brand is close to making an announcement. While you wait, consider the Suzuki Burgman Street. It’s a maxi-style scooter with plenty to offer starting at only P78,900. Its engine is a peppy 125cc unit with 8.58 hp and 10.2 Nm of torque, perfect for daily commutes or weekend trips out of town. Visit our Bike Guide for more information about the Suzuki Burgman Street.