A motorcycle’s engine gets a lot of attention especially when new technology takes a significant leap forward. People will constantly be talking about Honda’s new inline-4 engine they’re planning to unveil soon or Ducati’s latest V4 engines that will soon open up a new lineup of motorcycles. However, despite being an integral component of a motorcycle, the final drive doesn’t get as much attention as say, the engines themselves. We’re about to break down two of the most common types of motorcycle drives, chain, and shaft to make you understand if one’s better than the other. Chains are basically a series of inter-connected bearings that are linked together with inner and outer plates, which in essence constantly need lubricating. However, nowadays, the clever idea of permanently lubricating the pins and the bushings that rotate them by sealing them brought us what is now known as the sealed chain. This is made possible by the rubber O-rings located between the inner and outer link plates of the chain that seal in the grease for its lubrication, while at the same time, keeps out dirt and water from entering the mechanism.

A motorcycle chain is designed to conform to the shape of the sprocket’s teeth and operate at just a sixth of their tensile strength. A neglected motorcycle chain drive would have more chances of losing the teeth of its sprockets rather than snapping the chain. Thus, a visual inspection of the motorcycle’s rear sprockets should always be made, and it shows a more shark-tooth shaped kind of appearance, it’s a tell-tale sign of a repair and replacement.

Most modern performance sportbikes seen today such as the Yamaha YZF R1 or the Honda CBR1000RR Fireblade are chain-driven motorcycles. The same holds true with lighter dirtbikes, such as the Honda CRF250L or the KTM 690 Enduro R because although the harsh elements still make them prone to breaking,  their weight-saving characteristics still make them more ideal for off-road use.

Pros and cons of a chain drive Chain drives are generally lightweight which also makes them contribute to better fuel economy, and fairly easy to service. However, they do require a lot more attention when it comes to lubrication, cleaning, and re-tensioning, and compared to shaft drives, they wear out much faster. In harsher conditions like those involved in off-road and desert riding, chains are more susceptible to breaking and stretching. They are more prone to getting dislodged and coming off when given this type of abuse.

However, if you’re the type who likes tinkering with your motorcycle’s performance, replacing the chain and sprockets can instantly change your motorcycle’s final drive ratio making a chain-driven motorcycle more adaptable and versatile according to the needs of the rider. They do have the tendency to spew out excess lubricant and grease into its surrounding areas which could also cause danger especially if the excess grease and lubricants splatter to the tires of the motorcycle or the road, but that should be minimal provided you lubricated your drive chain the right way

How to lube your chain. Shaft drives have been the final drive of choice for most of BMW’s lineup of motorcycles going as far back as 1923. According to Roy Oliemuller, BMW’s Communications Manager for North America, “The historical use of a shaft drive was primarily for the longevity and minimal maintenance requirements,”. Driveshafts are a piece of technology that is more commonly seen in four-wheeled vehicles rather than motorcycles.

Rather than transferring the energy delivery of the motorcycle’s engine by two sprockets and a chain, a final drive shaft is connected to the engine that propels the rear wheel forward by gearing joints that turn the power 90 degrees from the shaft, to the rear wheel. Thus, drive shafts are best reserved for engines with longitudinal crankshafts such as BMW’s boxer engines. This provides a much smoother driving experience compared to chain-driven motorcycles.

Among the most popular motorcycles that use a shaft drive include the BMW R Nine T, the R 1250 GS, and the Moto Guzzi V7 III.

Pros and cons of a shaft drive 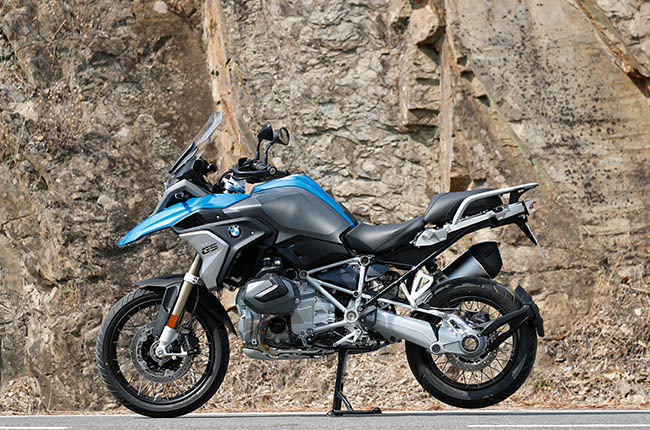 Besides giving you the smoothest driving experience, a shaft-driven motorcycle also has a longer lifespan than that of a chain-driven motorcycle. They offer much less noise and go longer periods without maintenance as compared to chains. However, because of the technology involved with these types of motorcycles, and unlike motorcycle chains that are more mass-produced and easier to manufacture, shaft drives tend to be more expensive and much heavier as its production is not as common as that of motorcycle chains, and more specialized tools and equipment is required to make and maintain a shaft system.

In addition, an additional output is needed to turn the power 90 degrees from the shaft to the rear wheel. Thus, a significant power loss results as a form of compensation for the extra push needed to drive the shaft to the rear wheel, and if you’re the tinkering type of motorcycle guys, a chain would suit your needs more for your track days. A compromise should be made between low maintenance and better performance. In the end, it would still boil down to your preference and your riding style. If you’re the type who likes going on dirt trails, and motocross racing, then a chain-driven motorcycle would obviously suit your needs more as the added weight of a shaft-driven motorcycle would just give you a harder time going through the mud, dirt and unforgiving terrain. However, if you’re the type who plans to keep your motorcycle for quite a long time, the practically maintenance-free nature of a shaft-driven motorcycle might be more for you. This is where BMWs tend to shine, as you can still see some classic shaft-driven 1960s era R75s still running to this day that collectors still hunt for.