There’s no denying that we, Pinoys, love our sportbikes. There’s just something about sportbike styling and aesthetics that captures the hearts and minds of motorcycle enthusiasts. Perhaps it’s the futuristic shapes and angles of the bodywork, or the notion of sheer performance that accompanies sportbikes. Whatever it is, there’s no denying that if you ride a sportbike, chances are you’ll be turning heads wherever you go.

Unfortunately, however, most full-fledged sportbikes are rather difficult to ride. Equipped with tall seat heights, hunched-forward ergonomics, and peaky powerbands, it can be pretty difficult to ride one of these machines on a daily basis. Thankfully, Kawasaki makes one of the best bang-for-buck beginner friendly sportbikes out there in the form of the Ninja 400. Here’s why we think the Kawasaki Ninja 400 makes for the perfect daily sportbike. Unlike its bigger displacement counterparts such as the Kawasaki ZX-6R and Yamaha YZF-R6, the Ninja 400 is a lot more docile and tractable by comparison. Equipped with a 399cc parallel twin engine, the Ninja 400 produces a decent 44 horsepower, making it powerful enough to have a good time on, yet friendly enough for beginners to confidently swing a leg over and ride.

To add to this, the Ninja 400 features friendlier, slightly more upright ergonomics, making it more comfortable for use on a daily basis. It does, however, come with clip-on handlebars, and slightly rear-set foot pegs. But you’ll notice that the clip-ons have a prominent rise, while the foot-pegs are slightly lower than those of supersports. All this translates into a more comfortable ride, which can have you riding the bike far longer than any other sportbike in the market.

Top 5 Most Affordable 400cc Bikes - Behind a Desk

We’re all familiar with the saying, “it’s better to ride a slow bike fast than a fast bike slow.” The Ninja 400 is the embodiment of this statement, especially when it comes to the track. Equipped with a full fairing and the aforementioned clip-ons and rear-sets, the Ninja 400 is basically a track-ready machine out of the box. That said, it’s friendly power delivery means that it’s a lot more forgiving, in the event things go sideways.

It’s unsurprising that the Kawasaki Ninja 400 has become the go-to bike for first-time track riders all over the world. However, the Ninja also proves to be an enjoyable companion even on city streets. Thanks to its lightweight construction amounting to 168 kg, even smaller riders will find it easy to maneuver this bike in city traffic. 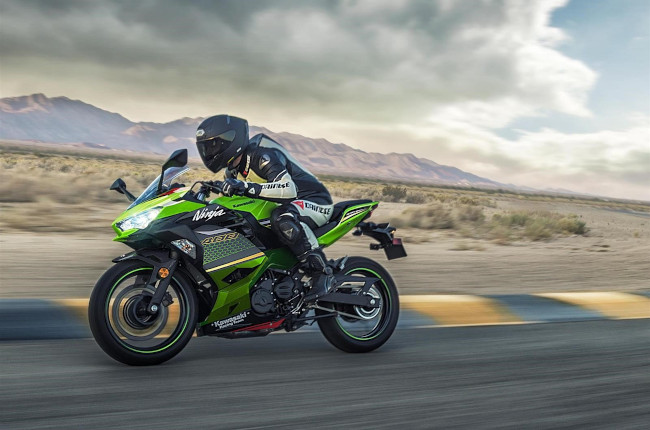 Given the massive popularity of the Kawasaki Ninja 400, it’s not really surprising that a massive aftermarket has grown for this bike. Reputable name brands such as Akrapovič and M4 have released multiple aftermarket exhaust systems, both for street and track duty. Additionally, tweaks to the bike’s ergonomics can easily be done by swapping out the clip-ons and rear-sets for more aggressive units. Lastly, should you so desire, numerous high-end suspension upgrades from the likes of Öhlins and Showa are readily available, and easy to install.

All that being said, the Kawasaki Ninja 400 undoubtedly makes for an incredibly good choice for a sportbike which is rideable on a daily basis. Its  impressive overall performance, undeniable Kawasaki reliability, and affordable price tag of just P331,000, all make it one of the best options in the entry-level big bike segment.