Those of us who are fortunate enough to own and ride motorcycles above 400cc of displacement are privileged to utilize the high capacity roads, more commonly referred to as the expressways.

Contrary to popular belief, riding a motorcycle on the expressway is actually safer—given that all vehicles are moving in the same direction, and the roads are more or less better maintained—than riding on service roads and side streets. However, in order to maximize this benefit, it is important that we ride with safety as our number one priority. Here are a few tips to keep us safe while riding on the highway.

Avoid staying in the middle of the lane Unlike our four-wheeled counterparts, a motorcycle's contact patch to the road is situated dead-center, as opposed to that of cars which are on the leftmost and rightmost sides. As such, lots of unwanted debris, oil, water, and soot coming from cars gets gathered up in the middle of the lane. The cleanest part of any lane—where  traction can be maximized for motorcyclists—would be the inner and outermost portions.

Don’t rely solely on your mirrors 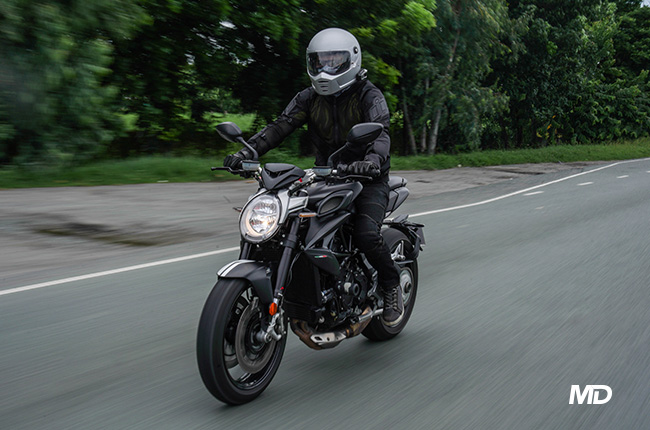 Similar to driving a car, it is important that we actually look at where we want to go to make sure the space we are about to occupy is free of any threats—both oncoming and behind. Relying solely on your mirrors is risky, since motorcycle mirrors tend to be smaller than car mirrors, and the continuous slight movement of the handlebar may cause certain things to waver in and out of visibility.

Momentarily turning your head to see what’s coming up behind you—also known as performing a head check is the safest way to change lanes, as it ensures that what you see is actually there. It is also a mandatory action in order to pass driving/riding licensure exams in European countries and in America.

Ride at a slightly faster pace than traffic As emphasized in point 2, it is important to keep the flow of traffic around you undisrupted so as not require the drivers around you to make any sudden maneuvers to avoid you. As such it is safer to ride at a pace slightly faster than that of surrounding traffic, as it keeps you visible and ensures you are not a hazard drivers will have to slow down for.

You must exercise caution in determining the margin at which you will exceed the pace of traffic. This would depend on several variables such as road condition, weather, your personal health and state of mind and other things. Just make sure not to exceed the speed limits too much. Sometimes, no matter how safe we ride, how geared up we are, and how visible we try to make ourselves, there will always be an inattentive person in a car who’s either too busy texting, on the brink of dozing off, or simply too ignorant to pay attention to surrounding traffic. This is why it is important to constantly scan the traffic ahead of you and determine little escape routes, should the situation behind you get out of hand. One benefit of being on a motorcycle is that we can fit into spaces cars couldn’t.

At the end of the day, motorcycling is all about fun and getting to where we need to be quickly. Of course, safety comes first before all this. Equipping yourself with the right knowledge, mindset, and skills will ensure that you get to enjoy the sheer bliss of motorcycling for the rest of your life. Do you have any other tips to consider when riding on the highway?