Riding your motorcycle in heavy traffic situations can be quite a challenge. As opposed to riding on the open road, traversing through heavy traffic requires more skill because of the lower speeds, and crowded road conditions. Filipino riders are well accustomed to attacking the traffic-laden metro, however, this isn’t to say that we are masters of the art of safety and discipline.

The unfortunate truth is that so many kamote riders let their true colors show when the traffic builds up. Not only is this generally unsafe behavior, it also gives motorcyclists who want to ride in a respectful and disciplined manner a bad name. That being said, let’s take a look at a couple of do’s and don’ts when it comes to riding in heavy traffic situations.

What are the different types of riding gloves? There’s a saying that goes “you can’t see your reflection in boiling water.” This is an idiom that’s meant to encourage people to preserve the stillness in their lives, no matter the situation. The same goes for riding. If you let the heat and discomfort of being stuck in traffic get to your head, the chances of you making sound decisions diminish by a large margin. This can lead to accidents, close-calls, and even incidents of road rage.

Instead, choose to take the path of least resistance. Stay calm, relax, and take in all your surroundings with an acknowledging nod—no matter how bad they may be. This way, you’re in control of your mood and temper, and can better make decisions when it comes to managing the heavy traffic around you.

How to properly break in brand new motorcycle tires

Don't ride on the curb or bike lanes 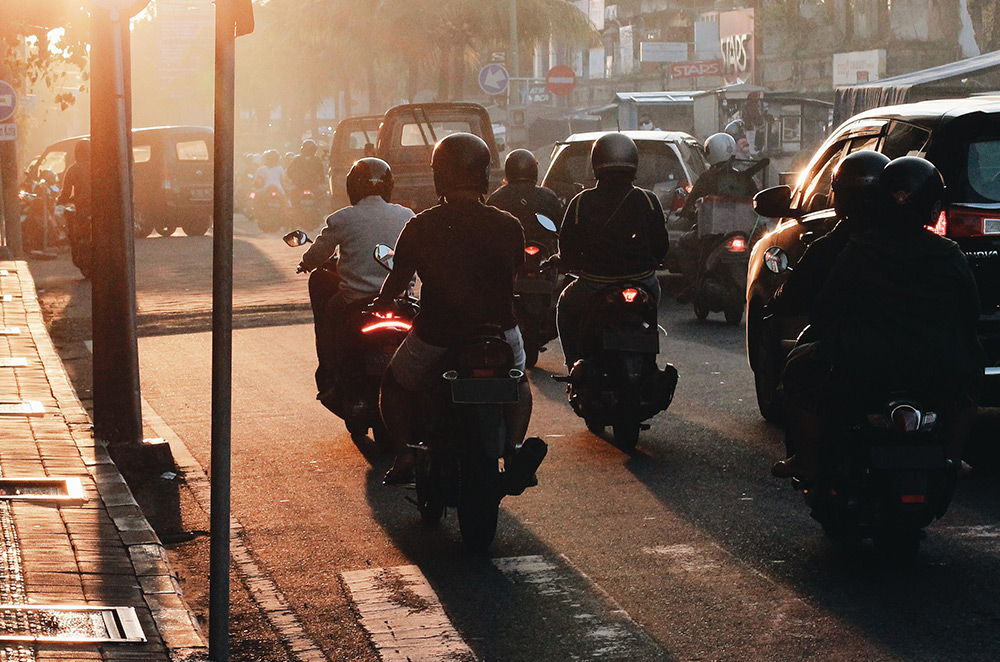 Seeing motorcycle and scooter riders trying to cut the queue by riding on the sidewalk or bicycle lanes has been a topic of much attention lately. With cycling becoming an integral aspect of many Filipinos’ daily lives, infrastructure centered towards cyclists has become ubiquitous. Much to the dismay of sensible road users, bicycle lanes have become expressways for kamote riders who absolutely don’t deserve a license.

Riding on the curb is equally dangerous and offensive, as well. Not only does riding on the bicycle lane or curb serve as a potential hazard to cyclists and pedestrians, it’s also a glaringly shameful act which showcases the lack of discipline of so many people. It absolutely ruins the image of motorcyclists to the general public, especially those who are trying to be disciplined and courteous road users. This brings us to our next point. In heavy traffic, it can be all too easy to lose track of our tempers. It doesn’t matter if we’re on two, three, or four wheels—it can be easy to forget that the person sitting next to us in traffic is also a human being—a person with a whole list of things in his or her life which are waiting for them at the end of this traffic jam.

That being said, it’s important to realize the human aspect in all of this, and understand that, just like you, the rider or driver next to you in the queue just wants to get to their destination.  As such, it’s important to be kind no matter the situation. It surely goes a long way in giving yourself and the people around you a more pleasant road-using experience.

Do you really need a big bike for daily commuting? Our last point is an absolute no-brainer, yet is something that’s all too common, especially for delivery riders and couriers. Texting while riding—including using social media messaging apps—poses a huge threat, not only to yourself but to those around you. Even if you’re stuck in a gridlock, one glance at your phone takes your attention away from the situation, and can result in you delaying traffic behind you, or worse, figuring in an accident. This causes untoward delays not only for you, but everyone else involved.

If you absolutely must attend to your mobile phone while on a ride, please don’t do so in the middle of the road, or at the side of a busy thoroughfare such as EDSA or C5. Instead, look for a lay-by area, or pull into a gas station to attend to your concerns. Doing so goes a long way in keeping the flow of traffic as smooth and unobstructed as possible.