Naked bikes just keep getting better. A couple of decades ago, naked bikes were little more than sportbikes stripped of their fairings, and fitted with upright handlebars and mid controls. Recent years, however, have brought about a whole new sub-segment in the naked motorcycle market. Hyper naked motorcycles have dominated the market, and offer a happy medium between the outright performance of a superbike, and the comfortable, tractable nature of naked bikes.

Out of all the hyper naked motorcycles available in the market today, it can be argued that the Ducati Streetfighter V4 is by far the best. Some would even go as far as saying that this bike is the ultimate naked bike. Well, as it would turn out, these claims are by no means unfounded. The Ducati Streetfighter V4 represents decades of Ducati innovation and technology—all of which culminating in a machine that’s leagues beyond its competition. That being said, let’s take a closer look at just what makes this motorcycle so special. The Ducati Streetfighter V4 boasts one of the most high-tech engines to roll out from the manufacturing facilities of the House of Borgo Panigale. This MotoGP-derived motor takes cutting-edge racing technology, and repurposes it to offer the most exhilarating street riding experience imaginable.

208 horsepower is immediately on tap via the bike’s 1,100cc 90-degree, liquid-cooled, fuel-injected, Desmodromic-actuation engine. Pumping out this much power, the Streetfighter V4 is one of the most powerful naked bikes currently on offer. The technology behind this engine—the Desmosedici Stradale—is thoroughly impressive. The engine’s cylinder heads have been derived directly from Ducati’s MotoGP V4 engine, and the motor’s fluid dynamics are based on the thermodynamic principles employed in Ducati’s Desmosedici GP bike.

Which Ducati motorcycle is right for you? 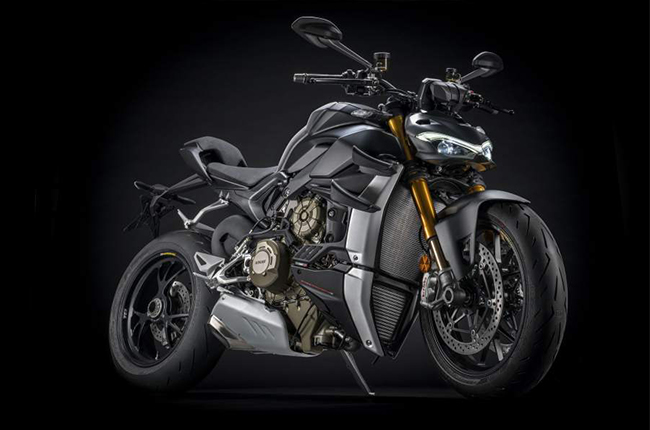 Given how much power and raw performance the Ducati Streetfighter V4 pumps out, it’s understandable that Ducati would need to resort to the use of sophisticated electronics to keep all this grunt at bay. Otherwise, anyone short of a seasoned motorcycle racer could end up crashing the bike. Suffice it to say that without these rider aids, the Streetfighter V4 would be borderline unrideable. To tame this beast, Ducati has equipped it with cornering ABS, traction control and even slide control. All these features are governed by a technologically advanced six-axis Inertial Measurement Unit (IMU).

Other techie features include a suite of race-oriented gizmos. For instance, you can ride like a pro thanks to the Streetfighter V4’s built-in Wheelie Control, Power Launch control, and engine braking control. For an even more engaging ride, the bike comes standard with Ducati’s Quick Shift bidirectional quick-shifter. The bike’s top-shelf suspension can be tweaked thanks to a full range of electronically actuated adjustabilit Of course, the cherry atop this earth-shattering, fire-breathing cake is its overall styling. In the looks department, the Ducati Streetfighter V4 is through and through a gorgeous machine. Its aggressive yet elegant lines exude an aura of sophistication and boundless performance. Premium touches such as piano black accents, carbon fiber bits and pieces, and sleek silver components all mesh together in a visual symphony that’s very pleasing to the eyes.

Overall, the Ducati Streetfighter V4 is one of the most beautiful motorcycles in Ducati’s current model lineup, and can be made even better thanks to the rapidly growing aftermarket for this bike. Tons of accessories and upgrades from world-renowned name brands such as Akrapovic, SW-Motech, and Rizoma not only improve performance and practicality of this bike, but elevate its styling and premium feel.

Superbike for the street Given all these performance and technology features, there really is no denying that the Ducati Streetfighter V4 is a superbike for the street. It’s the perfect bike for those who are looking for a thoroughly modern street bike, capable of performance which is at par with any superbike currently available in the market. In the local market, the Ducati Streetfighter is available in three variants. The base model fetches P1,3905,000. Those who want a more performance-oriented package can opt for the V4 S which starts at P1,590,000 for the Ducati Red colorway, and P1,605,000 for the Stealth Black color option.