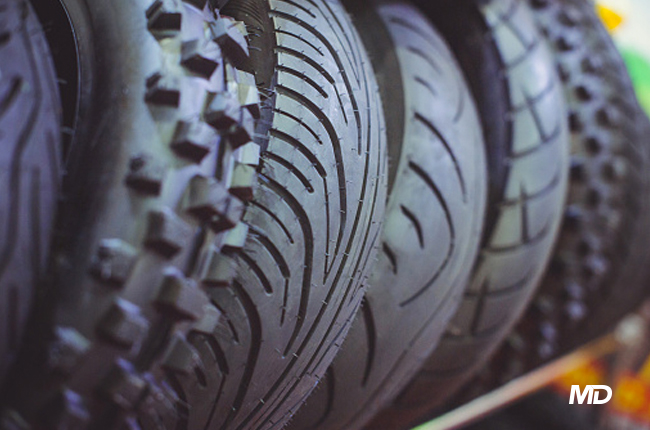 Whether or not you decide to turn your bike into a custom, your motorcycle’s tires would be something you’d have to eventually replace, whether its due to wear and tear, or because you’re about to change the look of your bike. Either way, the choice of tires you put on your bike should suit your riding style, much like the choice of boots or helmet you’ll be having. Keep in mind that different types of tires also have different kinds of construction, tread, and would often have a different mix of compounds to suit their purpose. To give you a better idea of how tires behave differently from one another, we give you the different kinds of motorcycle tires according to its specific use. 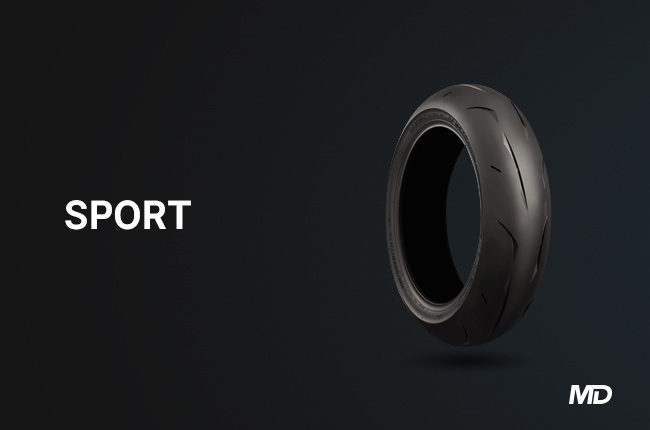 Sport tires or sportbike tires are intended for lightweight corner carvers and high-performance street bikes. They are lighter than the other types of tires and are made of softer compounds and mostly have a generally more rounded shape that’s meant to provide more grip to give you more confidence in laying the bike deep into corners as most sport bikes are capable of. Its carcass, or in simpler terms, the “body” of the tire underneath its tread, has a stiffer radial construction to ensure stability and support and better heat dissipation, especially in high-speed cornering and braking when it causes the most stress to the tires.

They normally have only a few tread patterns to ensure a greater surface area for grip, yet they would still be able to handle some wet weather conditions. While most sport tires have a rounded shape, some sport tires also have a flatter profile to ensure that your bike doesn’t involuntarily lay itself down at the sight of every corner and to purposely give it more stability for straight-line riding — for people who don’t fancy dipping into corners too much. While they do provide with the most grip, they’re not normally meant for longevity. You’d typically see these kinds of tires on Kawasaki’s Ninja sportbike lineup. 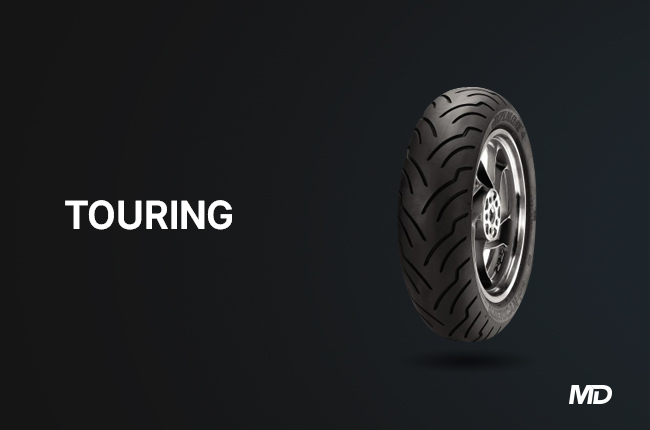 Touring tires, in contrast to sportbike tires, have a construction that’s optimized both for long mileage and great traction. They behave similarly to sport tires but have a slightly flatter profile for straight-line stability. They normally are made of a harder compound, that would sacrifice a little bit on its ability to grip. However, the tire’s longevity and range are increased. It usually has a more bias-ply construction that has belts inside it that are typically cords made out of fiber such as polyester, aramid, or fiberglass that makes it better at absorbing bumps on the road.  They perform excellently in wet weather conditions with much more treading than sport tires to keep water away from its contact patch. Typically these are the types of tires you would see on motorcycles where it’s riders spend a lot of time on its saddle in cross-country touring like the BMW K 1600 B. 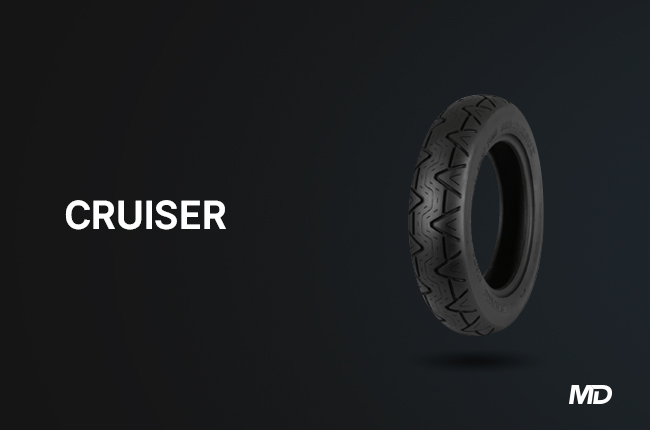 Cruiser tires and touring tires differ in such a way that touring motorcycles are more capable of cornering than cruiser style motorcycles which are built more for straight-line stability. As cruisers are not designed to attack corners as much as sportbikes can, hence its tire construction and design differ. They are engineered to be robust enough to hold heavy bikes and deliver long mileage and provide good wet weather traction. They have a combination of deeper tread depth and harder compounds to give you less wear and much more mileage, similar to touring tires. Because of the harder compounds that cruiser tires are made of, they come heavier than most types of tires. They’re designed to have stiffer sidewalls to take heavier loads from saddlebags or tandem riding. These are the types of tires you would typically see in big V-Twin cruiser bikes like the Harley Davidson Softtail and Roadglide models. 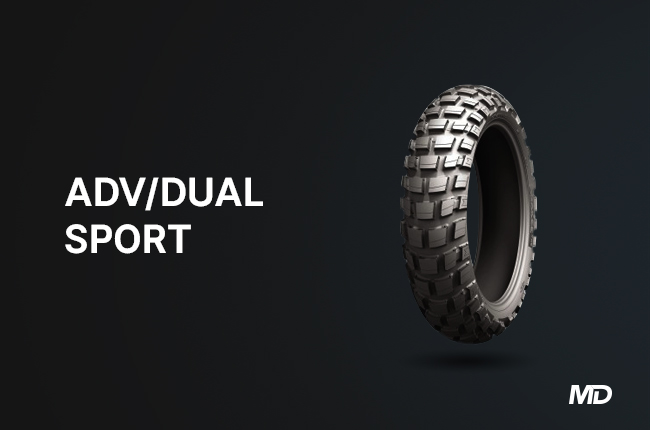 Adventure bikes and/or scrambler motorcycles are typically motorcycles that are meant for long-distance travel on both pavement and off-road. This means that the construction of ADV/Dual sport tires should be smooth enough for highway use yet with just the right amount of tread pattern for the loose surfaces of off-road usage. More-often-than-not, dual-sport tires would have a listed indication of percentages with regards to its intended use such as 70% offroad / 30% on-road. Knobby tires are more biased towards dirt usage while less aggressive tires would be better geared for more road usage with some light off-roading. For instance, Continental’s Trail Attack 2 tires are designed for 85% on-road and 15% offroad usage. These are the typical knobbier tires that you would find in adventure bikes that are meant for a little more off-road usage like the KTM 790 Adventure R. Meanwhile, Dunlop D606 tires have an intended usage of 90% offroad and 10% on-road usage. Typically, these would be the tires that adventure riders who like spending more time off-road, as its knobby construction would provide superior traction in loose dirt, sand, or mud surfaces. 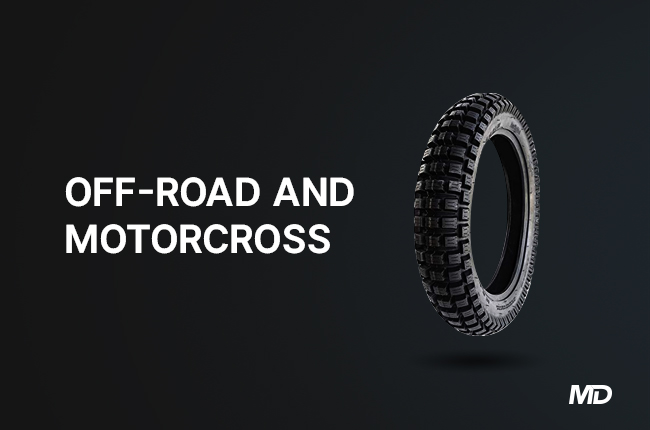 For true off-road riders, the only pavement its bike would see would be from a trailer or from a truck bed. Its tires are solely committed to dirt usage. Its construction would have an extremely knobby construction that provides exceptional traction in soft terrain that’s typical in enduro or motocross riding. Its tread goes as much as wrapping the sides of the tire that extends out at an angle to the central knobs which allows the rider to maintain grip as he leans around sharp berms with soft surfaces. These are typically seen in enduro bikes like the KTM 690 Enduro R. For dirt riding in harder terrain, typically seen in American flat track racing, the tires used have a low and tightly clustered knobs to increase surface area and more grip as the bikes race at speeds of up to 160 km/h while maintaining control on an unpredictable dirt track surface.