Technology truly is a marvelous thing. The pace at which it advances, particularly in the motorcycle world is equally outstanding. Just ten years ago, features we currently find in entry-level motorbikes were found only in top-shelf motorcycles worth hundreds of thousands, if not millions of pesos. It’s amazing to think that technology on a motorcycle like the Ducati 1098 S, which back in 2009, was worth more than P1.5 million, can be found in the likes of a Yamaha NMAX. Of course, outright power and performance is a different story, but you get the picture.

Today, anti-lock braking systems, or ABS, is a ubiquitous feature found even on small bikes like the Honda ADV150. However, this important safety feature is way too often overlooked, and simply because of how common it has become. Today, let’s take a closer look at ABS, how it works, and if you really need it on your motorcycle. ABS is a rather simple technological innovation which has come a long way since its incorporation in two and four-wheeled vehicles. In essence, it’s an electronic safety feature which prevents the wheels from locking up under heavy braking, thereby preventing a skid, slide, and eventual crash. The way it works is simple, really. A speed sensor mounted to the wheel keeps tabs on how fast your wheels are turning. If it senses that your wheel begins to skid under braking, it activates the ABS pump which pulses the actuation of your braking system. This gives your tires the chance to catch grip, putting you to a stop more effectively.

Should I buy a crash bar for my bike?

Do you really need ABS? 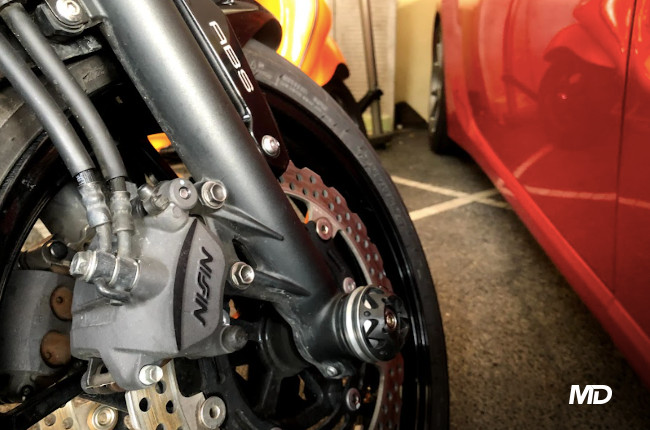 The answer to the question of whether or not ABS is a necessity isn’t a clear-cut yes or no. It really depends on the type of bike you ride, the kind of riding you do, and  of course, your skill level. These days, you’d be hard-pressed to find a big bike that isn’t equipped with ABS, however, many premium machines do give you the option to switch off the ABS system. That being said, ABS isn’t a necessity per se, but rather, a very useful safety net, particularly on the street wheein things can get very unpredictable.

If you ride your motorcycle in all weather conditions, then you’re well aware of just how easily your tires can lose grip on a surface which has been freshly rained on. All the oil and grime make their way to the surface during the first ten to fifteen minutes of rainfall, making the road a treacherous, slick surface. This is where ABS comes in handy, as it can do a good job of smoothing out jerky braking inputs, especially from beginner riders who have yet to master control of their bike’s brakes.

What should you do if water gets in your fuel tank?

When should you disable ABS? If your motorcycle is equipped with a programmable ABS system, you have the option to disable ABS, at your own risk. Disabling ABS is ideal in a competitive scenario in a closed circuit, as it better enables you to reach the very threshold of braking. If you’re in a private road or a closed parking lot, disabling the ABS also allows you to practice things like skids and stoppies. It’s important to note, however, that public streets are by no means places to do those things.

If you have an adventure bike, and plan to ride it off-road, then you may need to disable your bike’s rear ABS in order to have better control of the bike coming to a stop in uneven and loose terrain. However, on the street, keeping your ABS on is quite possibly the better option. As mentioned, things can be very unruly and unpredictable on public roads.