The KTM 390 Duke has come a long way since first making its debut in 2013. While it didn't exactly have the most solid start back then, the first generation 390 Duke was, on paper, the perfect recipe for a fun and capable machine. Plagued with all sorts of mechanical gremlins, KTM took action and developed a whole new bike, addressing all the issues in the process. Debuting in 2017, the second-generation 390 Duke was leaps and bounds better of its predecessor. Now bearing the unmistakable styling of 1290 Super Duke R, the 390 Duke was now both a looker and a performer.

Having had the KTM 390 Duke for the better part of 2 years, we’re pretty much acquainted with all of the bike’s nuances. From long highway stints to spirited rides up and down the mountains, to seemingly endless heavy traffic excursions, our KTM 390 Duke has seen it all, and come out on top each and every time. That being said, here are 5 things we love about the KTM 390 Duke. When looking at the KTM 390 Duke for the first time, you’d be forgiven for thinking that the bike was in fact bigger and meaner than it actually is. Bearing the unmistakable design of the 1290 Super Duke R, the 390 Duke comes with sharp bodywork, an exposed trellis frame, and subframe, and a stunning split LED headlight. On top of that, it comes in two very attractive colorways — white and orange — both of which exude a premium quality that put on top of its class.

Perhaps another defining feature of the KTM 390 Duke is its range-topping TFT screen — which during its launch in 2017, was a groundbreaking feature for its class. Even to this day, it remains one of the only entry-level big bikes to sport a full-color TFT display. Of course underneath that swanky gauge cluster lies a suite of nifty electronics which we will touch on a bit later. 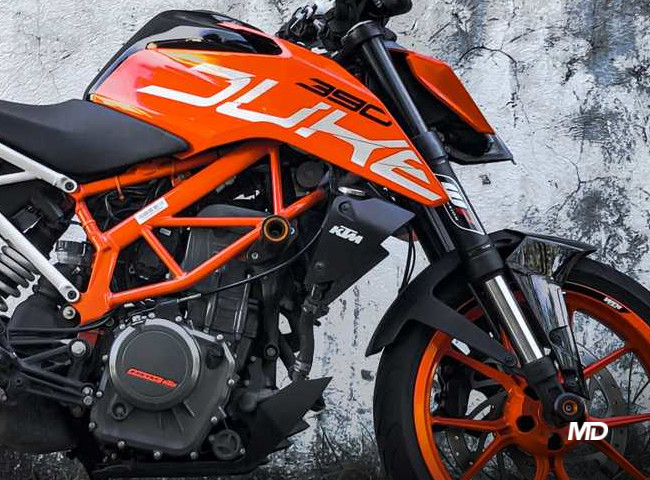 Powering the KTM 390 Duke is a revised version of the 373.2cc liquid-cooled, fuel-injected, DOHC, single-cylinder engine found in the previous model. Some minor refinements in the engine mapping as well as the cooling system — by way of a larger radiator and uprated radiator fan — keep temps at bay. The system does a good job at preventing overheating even when traffic gets rather heavy. Although running a bit lean at low RPMs, the Duke’s engine promptly springs to life with bucket loads of low-end torque, enough power to propel you from 0 to 100 in a good 5 seconds.

While being manageable in heavy traffic, it’s when the roads open up that the Duke’s spritely mill really comes to life. With an extremely rev-happy engine, you’ll be grinning your way through all 6 transmission speeds while enjoying exhilarating power delivery that isn’t overbearing. Producing a healthy 41hp and 37 Nm of torque, you’d be forgiven for thinking that the bike is a docile dog. In reality, it’s more than willing to pop the front end up under heavy acceleration. 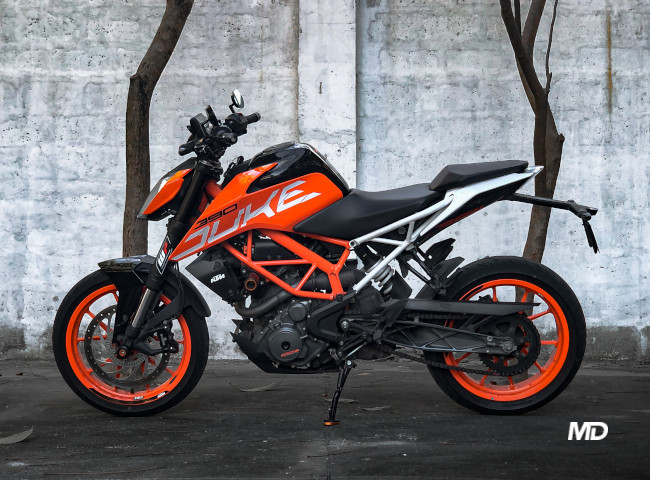 Complimenting the bike’s praiseworthy engine performance is its handling. Hopping onto the 390 Duke, and you’re automatically put in a supermoto stance, in an upright, albeit slightly aggressive seating position. The bike’s wide handlebars provide a lot of leverage when cornering. Weighing in at a featherweight 338 lbs with a full tank of gas, the Duke is more than willing to lean into corners, providing an almost telepathic riding experience where man and machine are in total harmony.

The KTM 390 Duke doesn’t miss out on some premium underpinnings either. For starters, the bike’s lightweight steel trellis frame and subframe are prominently displayed like the abs of an Olympic track and field athlete. Its beefy 43mm WP Endurance inverted forks provide very good feedback to the road, while the preload-adjustable WP mono-shock does an excellent job of tackling the bumps outback. Surprisingly, despite the 390 Duke’s manic power delivery and rev-happy engine, it manages reasonable fuel economy. On our particular bike, we average 25 kilometers per liter in the city, while hitting 35 km/L on the highway isn’t a far fetched possibility. Overall, on a daily basis with both congested city and expressway riding, the 390 Duke averages at around 27 to 28 km/L.

The KTM 390 Duke is equipped with a 13.5L fuel tank. Despite it being a rather efficient bike, you’ll still find yourself topping up every now and then, especially on longer rides out of town. That being said, the bike’s limited fuel capacity is, in part, responsible for keeping the bike’s weight down resulting in the platform being so zippy and responsive, so that’s something we can live with. When switching on the KTM 390 Duke, you’re greeted with KTM’s slogan “Ready To Race,” as if the bike is beckoning you to turn your daily commute into a time attack challenge (we will neither confirm nor deny if we do this on a regular basis). Now if that isn’t enough to get your adrenaline pumping, the bike features programmable ABS, giving you 3 options to choose from. By default, ABS is set to Road, which keeps both front and rear wheels from locking. Supermoto mode can then be activated, thereby disabling the rear ABS allowing you to let the tail step out and pull off some massive skids. Lastly, ABS can also be switched off completely, putting moves like stoppies and front-wheel skids on the table.

The KTM 390 Duke also comes with optional smartphone integration via the KTM MyRide app. This allows you to take calls and toggle music on the go via the switchgear on the left side handlebar. Another cool feature that we’re particularly fond of is the programmable shift light which you can set at any RPM. The bike tells you to shift by flashing the entire tachometer in bright red, making for an even more exhilarating ride

Overall the KTM 390 Duke exudes character and manic energy. It would appear that the folks at Big Orange designed the bike with fun in mind. It just so happens that the bike is equally practical and offers quite a lot of daily usability. With KTM’s tweaks and updates on the latest model, the 390 Duke is even more reliable, and will definitely make for an agreeable daily companion.