Today's crop of middleweight sport and naked sportbikes mostly come equipped with inline-twin cylinder, or parallel-twin engines. Now, for the uninitiated, this simply means that the engine powering your motorcycle is equipped with two cylinders, situated side-by-side. Now, the are several reasons why motorcycle manufacturers opt to make use of the parallel-twin configuration as against the more traditional V-twin setup. First of all, a parallel twin is substantially smaller and more compact, meaning it occupies less space than a V-twin motor. This gives manufacturers more leeway when it comes to optimizing the bike's chassis for better handling. Secondly, parallel twin engines are just cheaper to manufacture thanks to the fact that there are fewer parts to produce.

Now, while parallel twins are extremely efficient, sufficiently powerful, and decently lightweight, there are several types of configurations when it comes to the crankshaft which motorcycle manufacturers choose to incorporate into the engine's design. As you may have probably noticed, the exhuast note of, say, a Kawasaki Ninja 650 is a lot different than that of a Yamaha MT-07. This isn't solely due to the exhaust system, either. It has mainly to do with the orientation of the crankshaft found in each of this engines. Let's take a closer look at the similarities and differences between a 180-degree crankshaft-equipped parallel-twin, and a 270-degree crankshaft equipped parallel-twin motor. 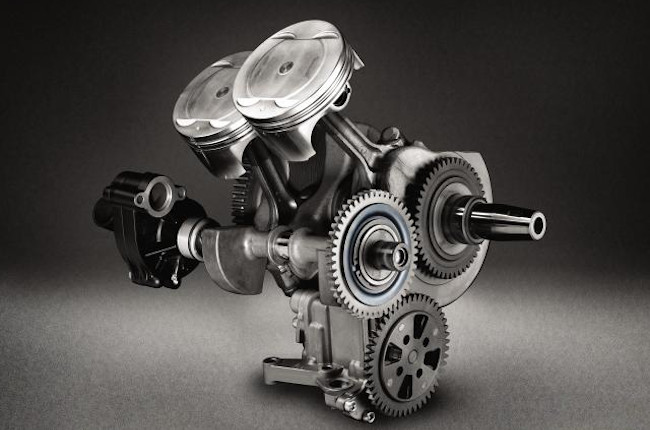 First of all, let's take a quick look at a 180-degree parallel twin. Simply put, the crankshaft you'd find in this engine has its crank pins situated at opposite ends from each other, hence, the 180-degree classification. So, what does this mean? With a 180-degree crankshaft, one piston rises as the other falls. Given all motorcycles' four-stoke configuration, this means that an engine with a 180-degre crankshaft has an uneven firing order, with the second cylinder going through the power cycle 180 degress after the first, and a whole 540 degree gap until firing again.

Going into a 270-degree application, or what others refer to as a crossplane crankshaft, just like the 180-degree parallel-twin, both pistons are situated side-by-side. However, as one piston goes down, the second piston follows suit three-quarters of a rotation behind. This also results in an uneven firing interval, however, the the interval at which both pistons go through the power stroke is a lot smoother, resulting in a more direct throttle feel. Now, this may all sound extremely techincal, and that's because it is. There are tons of videos all over the internet which do an excellent job in illustrating the differences betweent the two engine configurations. That being said, let's discuss the real-world applications of the two different engine layouts. For starters, up until recently, the 180-degree parallel twin was a much more common engine configuration, as opposed to the 270-degree. In most cases, a parallel-twin equipped with a 180-degree crankshaft provides very linear power delivery, with maximum torque and power occuring towards the upper reaches of the rev range. It also produces a rather dull exhaust note, akin to that of a lawnmower, or a high-revving single-cylinder engine.

On the other hand, a 270-degree crankshaft-equipped parallel-twin engine is far more similar to the power delivery of a 90-degree V-twin engine, like what you would find in bikes like the Ducati Monster, as well as early Ducati sportbikes. This means that max power and torque are achived at the mid-range, translating to an overall more eager and responsive ride, especially around town. On top of this, the exhaust note of a 270-degree parallel-twin is a lot burlier, and sounds very similar to that of a V-twin engine, as well.

It's also worth noting that the 270-degree crankshaft effectively eliminates what's known as inertial torque. In a 180-degree parallel-twin, the fact that both crank pins are on opposite ends from each other means that the crankshaft slightly slows down at top dead center and bottom dead center. This results in a heavy-feeling motor when it comes to throttle actuation, as well as, in some cases, large amounts of rev-hang. In a 270-degree setup, the fact that the crank pins are 270-degrees apart from each other eliminates this inertial effect, thus providing a more direct throttle response.

Lots of bikes to choose from When it comes to picking out a ride equipped with these types of parallel-twin motors, we've got you covered. If you're looking for a tractable, sporty machine with very linear power delivery, you may want to consider the Kawasaki Ninja 650. Equipped with a 649cc 180-degree parallel twin, this bike makes its peak 67 horsepower at the upper reaches of its rev range—at around 8,000 RPM. Other bikes with this type of engine include Kawasaki's entire 400 and 650 model range, as well as Honda's 500cc bikes in the form of the Rebel 500, CB500X, and CBR500R. Additionally, CFMOTO's 400, 650, and 700 series of motorcycles also sport this type of parallel-twin engine.

For those who favor mid-range torque and a burly exhaust note, the likes of Yamaha's 700 model range—the MT-07, XSR700, and Tenere 700 may be to your liking.  With a 689cc 270-degree crossplane parallel-twin, this engine pumps out 74 horsepower, and makes all the pops, bangs, and crackles of a muscular V-twin engine, especially when fitted with a decent aftermarket exhaust pipe. Other bikes sporting a 270-degree parallel-twin motor include Royal Enfield's 650 Twins—the Continental GT 650 and the Interceptor 650, as well as Triumph's entire Bonneville range of machines.