Even before the official launch of the HJC RPHA 1, there was tons of hype surrounding the new model. It officially made its debut this year at the 2022 Makina Moto Show where Triumph JT had plenty of interest and orders for the brand new racing helmet. From leisure riders to die-hard track junkies, it’s hard to deny that the model has a lot of things going for it, especially with regard to being one of the few safest helmets in the world.

The lid was so impressive that I just had to get one for myself. Right after it was officially launched, I called in to order a unit. This time I didn’t go for a plain white version, I went straight to the top of the line since it was a milestone of a product from HJC. This is the official Red Bull Grand Prix of the Americas colorway which is otherwise known as the Circuit of the Americas edition or COTA colorway. Right off the bat, it’s a beautiful livery and my purchase marks one of the rare occasions that I shell out the extra money for graphics. Normally, I’d go for a white helmet, but this time around I opted to go for the Red Bull graphic simply because it looks so good, it’s a limited edition, it’s HJC's first FIM homologated lid, one of HJC’s first ECE 22.06 helmets, and the first-ever officially licensed Red Bull helmet which even appears on the brand’s website. It’s the first time ever that Red Bull has ever officially licensed its logo and branding to a helmet manufacturer in a consumer-grade helmet. Prior to this, only racers and pit crew members representing the Red Bull brand on the race track were allowed to have helmets with the Red Bull logo on them, but now consumers can get in on the action—as long as supplies last.

Don’t let that take away from the design of the RPHA 1, however, as HJC has done an amazing job of making the helmet as streamlined and as aerodynamic as can be. It even comes with an optional spoiler that you can clip and stick on the back, but since my use case doesn’t always involve the race track, I opted to keep the clear spoiler in the box for the time being. Other than that, the helmet looks sharp and it’s just begging me to take it out for a ride. It’s sure to match up well with a sportbike or a super sport, and it can definitely find a home on a sport naked motorcycle. The styling alone necessitates that you do a full tuck to get the most out of its design, so it’s definitely a helmet meant for more exciting motorcycles. 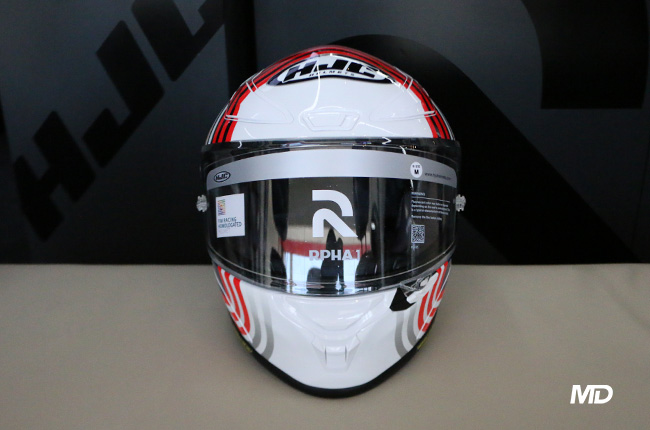 Actuating the vents and visor of the helmet is a treat. Every touchpoint on the RPHA 1 is as premium as can be. All the vents open and close with confidence, and I do prefer this style of vents compared to the RPHA 11 whose top vents used a rotating dial. However, the visor open tab is now located to the left side of the helmet creating a bit of an asymmetrical look. While I did prefer the centrally-mounted latch found on the other RPHA models, the RPHA 1’s is still easy to flip up and down thanks to the new hinge system which feels confidence-inspiring.

Not everything is perfect, however. I don’t really like the forehead vent’s switch and the visor locking tab, since they’re kind of hard to actuate due to the smoothness of the switches. It’s kinda hard to flip the switch back and forth with gloves on, but that’s something that you could get used to over time and with practice.

Other than that, it’s relatively light. In a size medium, the label at the back says it weighs 1,500 grams or 1,660 grams with all the accessories on. It’s definitely heavier than a standard RPHA 11 Pro, and it weighs about as much as a standard RPHA 70, but even then the helmet feels light on your head due to the way that it’s balanced. While the RPHA 11 Pro feels a little front-heavy, the RPHA 1 feels balanced. It may not be lighter on paper, but it feels just as light as the 11 at least while I’m sitting at my desk. HJC helmets in general fit snug on your cheeks and the RPHA 1 is no different but it takes that snugness to the next level. If you’ve ever owned or fitted an RPHA 11, the 1 is a little tighter around the crown area and definitely tighter around the cheeks. The pads are firmer and the EPS foam fits closer to the contours of my head, though all of my observations are pre-break in.

I can say that the fit is similar to the RPHA 70, tighter around the side of the head and the cheeks, but firmer overall. It’s a squeeze for “healthier” riders, but for riders of a slim build such as myself, it’s exact. My advice is to try it around the store first. If the cheek pads are a little tight, give the helmet time to break in, but if the crown of your head is a little tight, consider trying the larger size and doing a shake test to see if the helmet will wiggle out of place.

As a general rule of thumb, however, whatever your size was in the RPHA 11 and especially the RPHA 70, it’s likely going to be the same for the RPHA 1. Consider a break-in period first, however, as the fit is definitely tighter than the 11 and the 70. As expected for a helmet sold in the Philippines, you get an ICC sticker. Then for use in Europe, it gets the all-new ECE 22.06 certification. On top of that, it’s also DOT-certified for use in the United States, though it doesn’t have a sticker to show for it. Then for its crowning achievement, it has an FIM Certification which can be found on the outside of the left strap. The certification tag is a hologram encased in plastic and stitched on so it’s not going anywhere. It’s one of the safest helmets out there, and for those of you that don’t know, the FIM Certification will get you onto racetracks and if it’s good enough for some of the best racers in the world, it’ll definitely be good enough for you. You can buy the RPHA 1 for a starting price of P39,000 for a solid color. At the time of writing, Triumph JT has matte black and gloss white along with other graphic options. If you want graphics on your helmet, it’ll cost you P45,000 for standard colorways, and P53,000 for the Red Bull colorway as seen here. The reason why the Red Bull edition is more expensive is that it is a limited-edition graphic. It’s quite pricey compared to the rest of the HJC lineup, but it’s just about on par with other premium helmet options out in the market. Where the HJC RPHA 11 and RPHA 70 undercut many rivals in the segment, the RPHA 1 is about on par with other premium offerings but with the added FIM homologation. You will be totally fine with any other HJC, however, but no other HJC carries the highest safety certification in the world, but it definitely comes at a premium price compared to other lids like the RPHA 11 and the CS-15. In the realm of premium FIM homologated racing helmets, it’s a well-priced option. Consider the AGV Pista GP RR which is way above the P50,000 mark, and also consider that Arai helmets can get quite expensive as well—think RX-7. Bell also has their Race Star which is similarly priced and you also have the Scorpion R1 which is about as affordable as the HJC. The RPHA 1’s competitors might not be as readily available, however, due to the fact that the price boxes out a lot of buyers and dealers are not incentivized to keep huge amounts of stock all the time. Triumph JT, however, states that availability for the RPHA 1 should be enough given the current demand for the helmet and they’ve also stated that more stock is on the way. Though, is it better than my RPHA 11? Initial impressions say that will be, and I can’t wait to get it out on a ride to put that theory to the test. If the RPHA 11 was the bang-for-buck option in the segment of premium helmets, my hope is that the RPHA 1 will be the best bang-for-buck in the realm of premium racing helmets. To be honest, the RPHA 1 is on the extreme end of the spectrum in terms of safety, and it's definitely overkill for street riding in terms of its safety rating and its aggressive design. This is not necessarily a helmet that is destined for daily use, but let's also see if it can be. I'll be riding with this lid exclusively, so stay tuned for my full review.