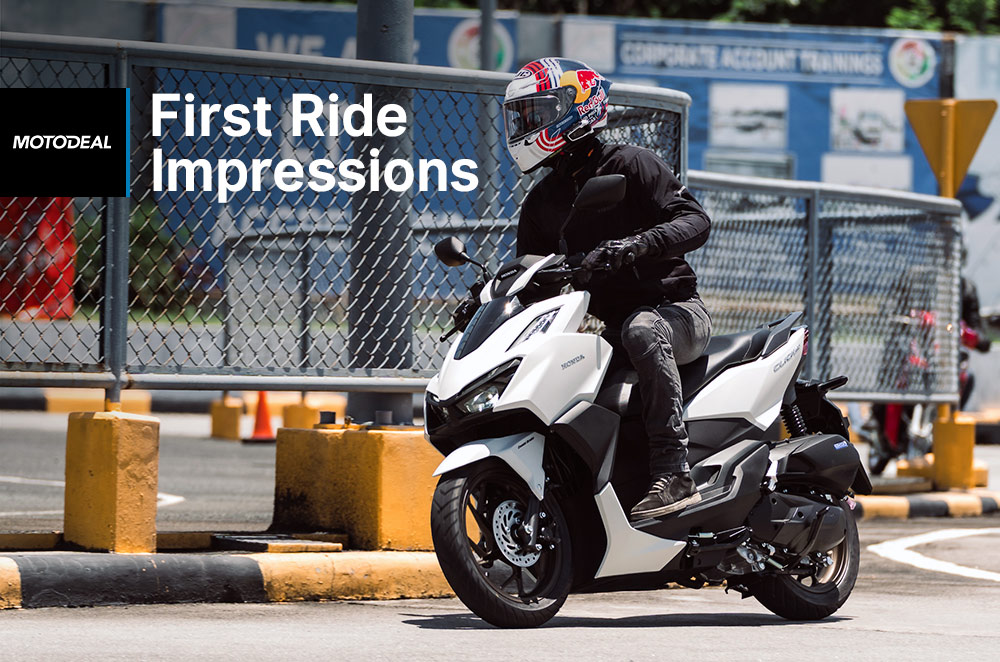 Honda Motorcycles Philippines called us out to their safety riding center in the south to test out their triad of new scooters and commuters, the Click 160, Airblade 160, and the Wave RSX. This time around, we’ll be focusing on the most popular model, the Click 160, which serves as the successor to the vastly popular Click 150i. The exterior of the new Click is beefier than ever before, but it retains a lot of the traits that made the nameplate so successful. For one, Honda was able to keep the flat foot area of the scooter, giving it a touch of convenience and functionality. Still, however, the foot well of the new Click is about the same area as the old model which leaves something to be desired for riders about 170 cm and up. For shorter riders, however, you’ll click right in (pun intended).

Honda also bragged about how the Click gained a bit of mass since its last iteration. Now, stacking it up against the Yamaha Mio Aerox 155 makes sense. The extra bulk is also mated to a fresh coat of paint, which the Click wears without decals. Since Honda opted to remove the decals, it makes for a clean look all around.

The LED lights also look great and you get them all around the bike from the indicators to the headlights. However, we didn’t get to test the lighting elements during the test ride just because the sun was out. More on this once we get the unit for a full review. For its segment, the Click is quite competitive. While Honda is missing some more advanced features, everything you need is there from the keyless ignition system to the USB charger. You also get some sizeable storage under the seat, but it’s unfortunately still not enough for a full-face street helmet. Perhaps a half-face would fit, but we didn’t have an open-face lid with us to test it out.

Following that, you get an all-digital gauge cluster that shows you everything you need to know from your engine speed, to your actual speed, and to your fuel level. Speaking of fuel, the Click is said to average close to 50 kilometers per liter, as per Honda’s findings. We’d like to see this happen in the real world. Perhaps the idling start-stop system helps a ton with fuel savings, especially at stoplights. We can note that the system is still unobtrusive and starts up the motor right away without missing a beat (great, another BeAT pun). The Click 160 backs up its sporty looks with some nimble handling. The additional torque that the new motor provides can be an indispensable tool when navigating through city traffic. The engine doesn’t have to work as hard in the lower RPM range in order to get going, and it’s a remarkable improvement from the old model. From a dead stop, the Click 160’s can get going faster than its predecessor and Honda mentions that it may not be as powerful as some of its rivals, but it makes up for it in terms of torque delivery and how the bike is set up to carve through city streets. Out of turns, you will note that the bike feels a lot peppier than the 150i which is great for city commuting and even going up inclines with a passenger.

The Click feels especially light to maneuver. Doing tight turns is no problem for the model, and it’s easy to lean into a corner with its low center of gravity and its smooth but peppy power delivery. Even with the added power and torque, the ride is still smooth and power can be rolled on precisely just like the previous model.

So far so good for the Click, however, we were not able to test the acceleration and the ease with which it gets up to speed since we were test-riding the units inside a closed course. Whether it’s a scooter you’ll use for commuting or for leisure rides, the Click 160 presents a decent value proposition. Its got the latest features from the Honda stable which include ABS, keyless ignition, and the idling start-stop system. The 160cc platform that Honda seems to be pushing now is a marked improvement from the 150cc bikes that Big H was previously selling.

For now, we see the Click as a marginal improvement over the 150i, and it’s not a must-buy for riders who have the previous generation as far as initial impressions go. However, if you’re coming from a Wave 110, Click 125, or an older model, this new generation Click is worth a look or two. Starting at just P116,900, the new Click 160 makes a great case for itself when compared to other rivals in the market. For “sporty” scooters, the Click looks good, feels good to ride, and packs features to make a case for itself to consumers and it undercuts the Aerox by a few thousand Pesos. It remains to be seen whether it’ll be an Aerox slayer or just another contender.

We’ll get this model to review soon, but so far so good. Hopefully, everything clicks into place when we get it for a review period. (Pun intended, again, for the last time).