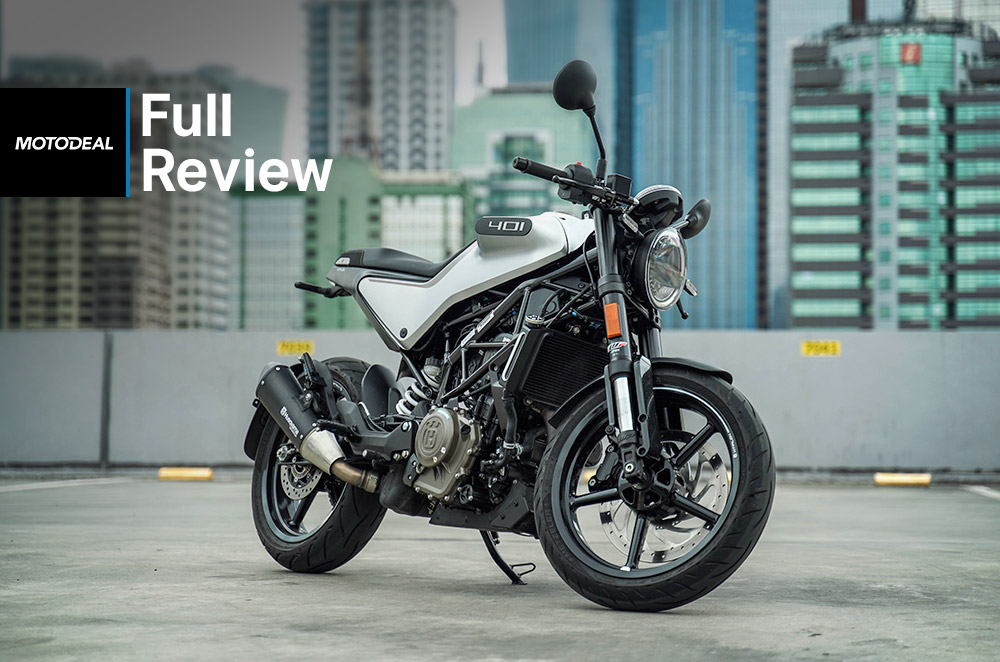 Soul. A transcendent noun that means more than normal words can describe. To some, a soul exists within a being, an object, or simply who am. To others, soul can exist in actions, words, works, and machinations and conceptualizations of the mind.

If the intro is a bit dense and complex, here’s soul materialized: The Husqvarna Vitpilen 401. 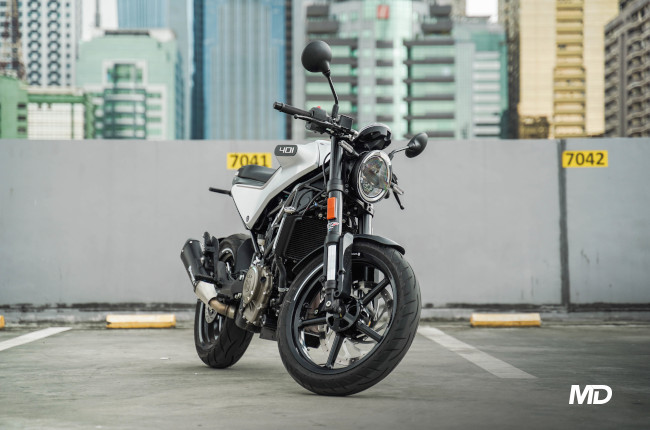 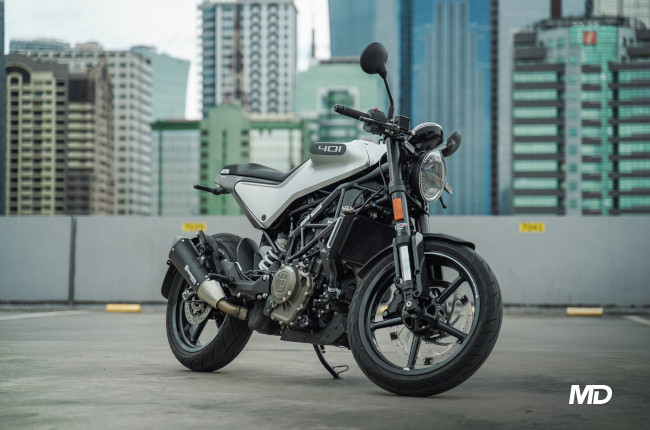 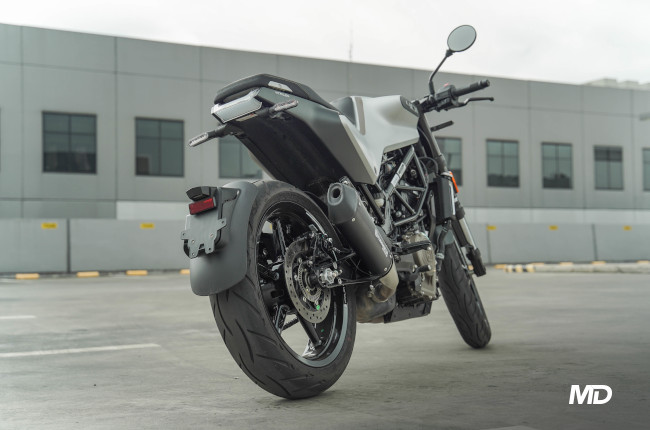 Stirring is the word, and great design is the second language of Sweden. Utmärkt Svensk Form or “Excellent Swedish Design” is undeniable on every plane and angle of the Vit. Husqvarna’s 401 family of bikes is minimalism cranked up all the way to 11, or as we like to say: Maximally Minimal. It’s the epitome of simplicity and other highfalutin jargon at least for now. 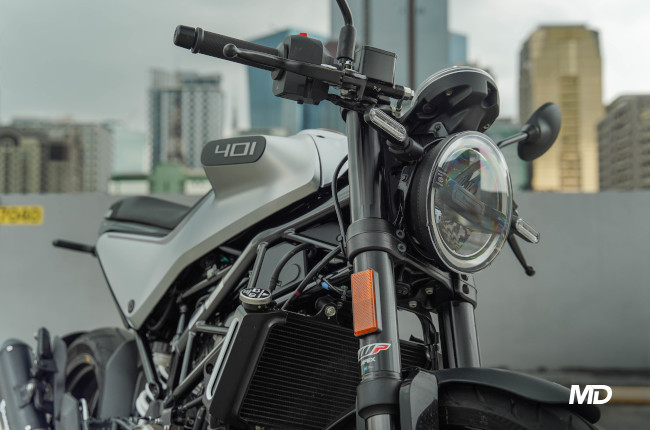 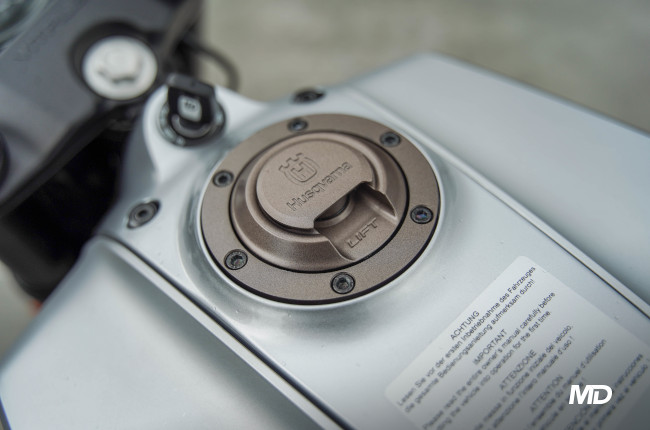 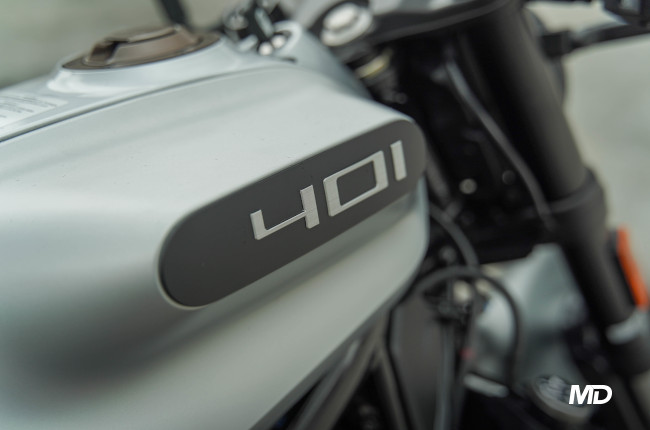 In normal person speak, this bike will have you yammering on about single-origin coffee and the intricacies of the flavor of said brew. A Vitpilen is so classy in its styling and it’s definitely not your average cup of joe. It’s a cafe racer, that much is true, but it’s such a refined concoction of panels and surfaces that your eyes will wander just like your tastebuds will when sipping on the finest cup of coffee in the morning at your favorite cafe. It’s a contemporary take on a classic motorcycle. It’s not chromed-out like a Royal Enfield, but it’s closer in design to the Neo-retro Honda models. You can also say that the XSR series from Yamaha or the Trident 660 from Triumph is similarly designed, but let’s face it, the Husky is more unique. 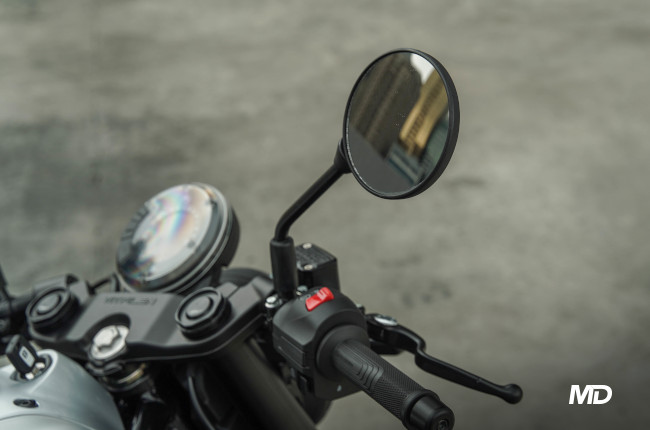 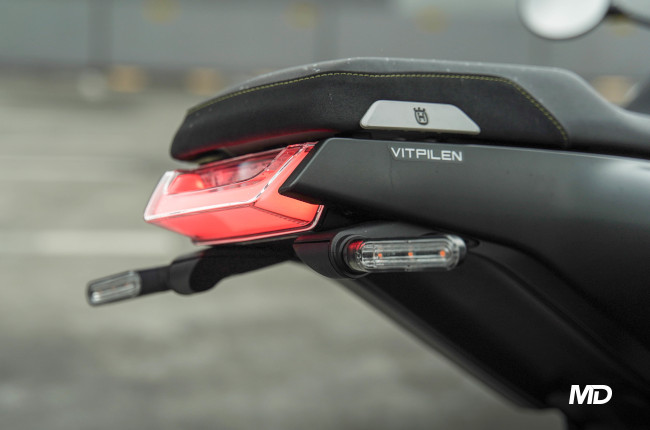 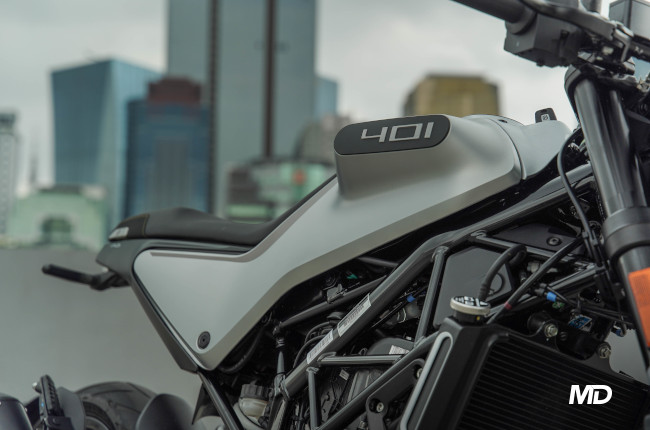 Stirring is the word when you look at the Vitpilen. The lines of the motorcycle move you, the surfaces capture you. It can hold your gaze in any light, and it satisfies you even while sitting pretty at the parking lot. Do you like what you see? We’re enamored, there’s nothing quite like it. Other brands try to get close with the chrome and the classic styling, but Husqvarna approaches things differently. Much thought has gone into the little details of this motorcycle. You have one continuous piece from the tank to the rear quarter of the chassis. The trellis frame is seen, but it’s not intrusive, instead, it blends in with the lines of the bike. This review would be as long as a book if we were to talk about every little detail. It’s a trip going through every nook and cranny of the Vit, and part of the ownership experience is visually and tactilely appreciating every bit of the bike. 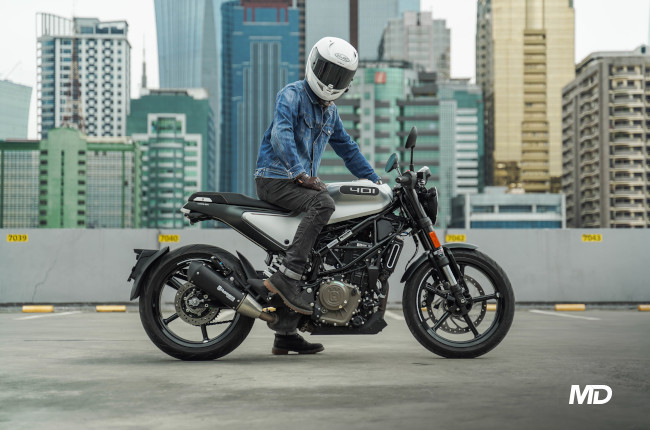 What else can we cover? Do we have gripes? Truly, one cannot call themselves a critical reviewer without some gripes. There are a few critiques that we need to mention. First of all, the mirrors are not the most stylish, but we can let it go given that the stalks are substantially engineered, and the mirrors themselves are easy to use and do not obscure your view. Husqvarna actually sells a bar end mirror as an aftermarket option, but note that it's only one bar end mirror and not two. The tank is also covered in plastic so it’s not ultra satisfying to grip with your thighs, but we’re nitpicking.  We can ramble and groan about how Husqvarna used KTM parts bin bits, but we’re not complaining about it. Our experience with KTM quality is pretty alright and the fit and finish of the key touchpoints of the Vit offer a great feeling of quality and tactility. Overall, and in a single word: extraordinary. 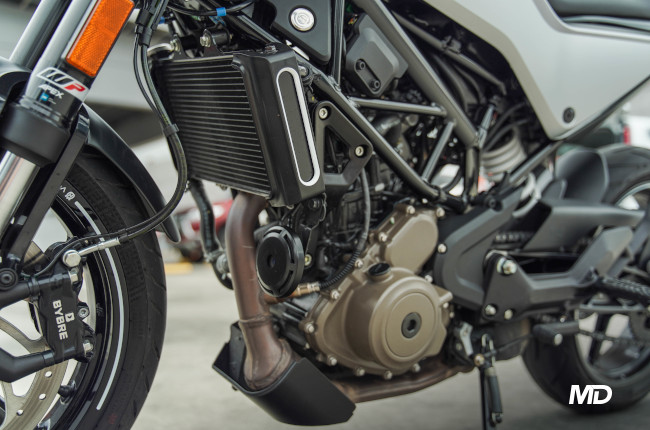 Some of our conversations in the office and with the marketing department of Husqvarna involved a lot of coffee. It didn’t help that the Husqvarna dealership had a coffee maker, so we couldn’t help but think about having a sip while we were looking at the bikes. Among the multiple conversations that we’ve had about the motorcycle, one stood out. The question posed was: “It’s just a fancy Duke or RC, right?” On paper, you could say that it is because KTM owns Husqvarna. In fact, the mechanical bits are shared between the brands. The trellis frame, engine, radiator, levers, switchgear, and a host of other parts are shared between the two marques. You’d think that it’ll be a familiar experience with a different flavor, and you’ll be right, but the similarities are not what you think. 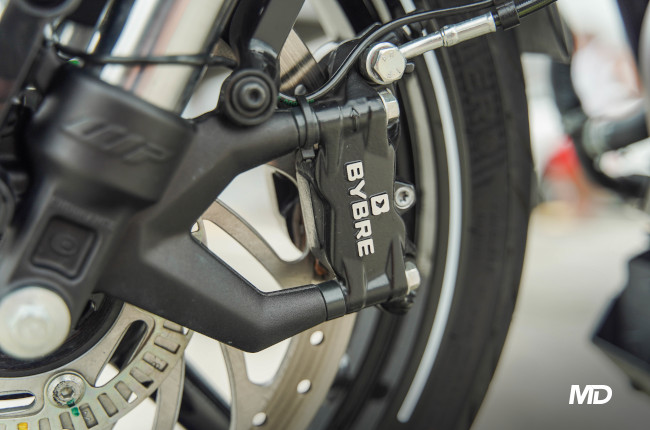 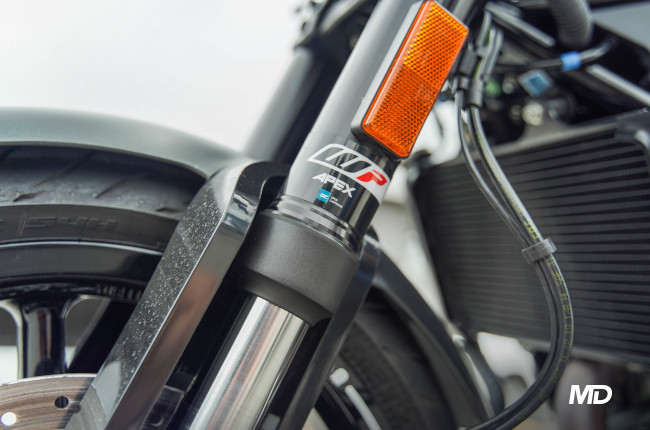 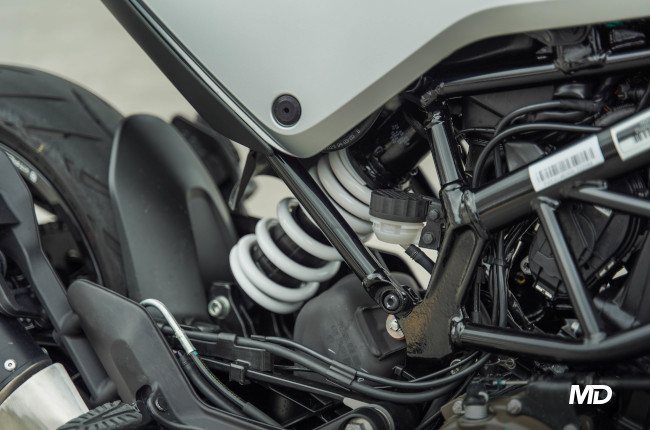 So what is it exactly? The gist of it is, a KTM is a can of Monster Energy, specifically the Khaos flavor since it is orange. The bikes from team orange are very exciting. Riding a KTM involves a lot of zest. There’s definitely a rush you feel that will make you want to ride. The Husky, in contrast, feels more mature. Again, going back to the analogy, it's like a cup of coffee. It still gives you a buzz, but it's a grownup's drink. Simple and elegant, like an americano, just water and a shot of espresso but with some very quality beans. Either the KTM or the Husqvarna will give you an adrenaline rush. 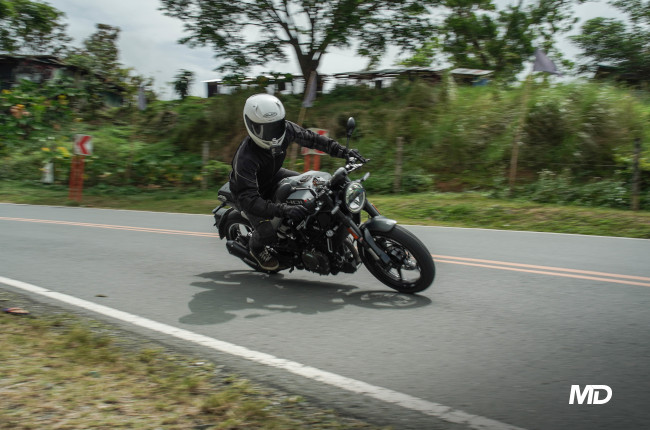 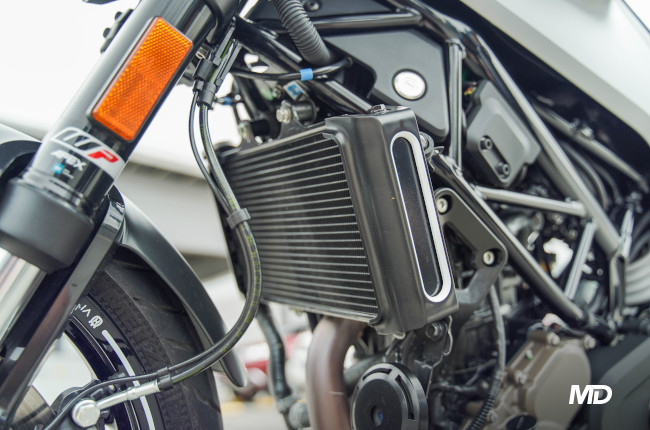 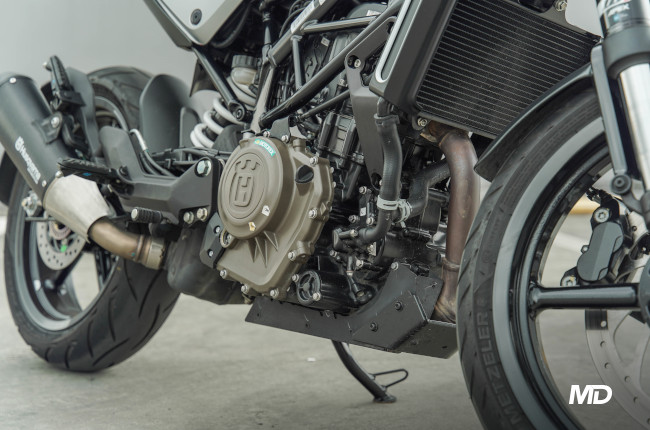 However, let's stop the comparisons and focus on the bike. It's a great performer with its 373cc single-cylinder that punches out 44 horsepower and 37 Nm of torque mated to a 6-speed transmission. You'd think that the bike would be a vibey mess, but the naysayers are dead wrong. The KTM group has put in the work and refined their engine by adding a more substantial counterbalance. The result is an engine that you can still feel when revved out but is über refined when at lower RPMs.

Handling is as expected, great. Light, agile, and with KTM DNA, the Husky corners like it's on rails, leans in like a super sport but without the fairings, netting you a raw and unobstructed view of the road. 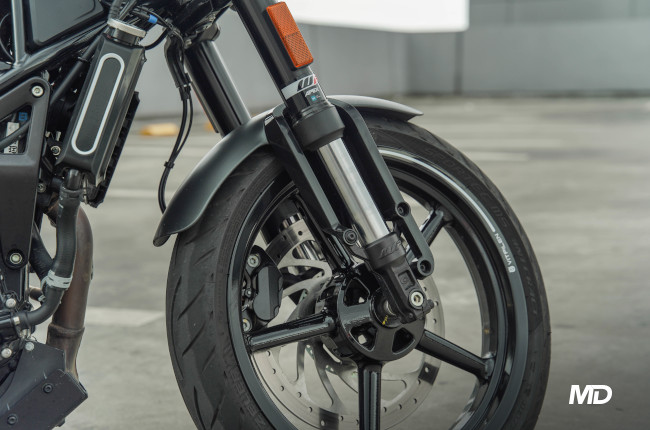 It’s not comfortable, but it’s worth it. Having tested the KTM RC 390, and considering the Vitpilen 401 comes with the same handlebars as the orange super sport, we’d say that the Husky is more comfortable. Why? It’s because you just look so good. We’re not saying that the RC looks bad, in fact, we laud it as one of the best-looking in its category, but what makes the Vit better? Simply put, you feel good. It’s like taking a placebo, in actuality, you’re hunched-over sitting forward, butt out, head forced into a tuck, and wrists in a compromising position. However, because you’ll look so good, the pain is well worth it—at least in our very humble opinion. 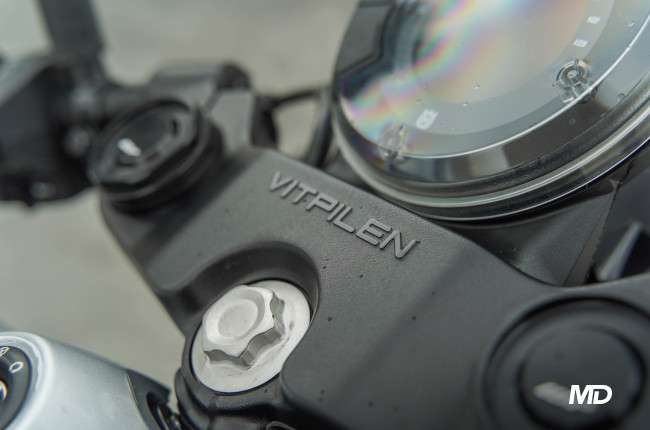 Let’s be real, though. It will be hard to take the Vitpilen on long rides. Short stints in the city and continuous cruising on the highway is no problem, but once you need to execute low-speed maneuvers, lug the bike through traffic, the magic can wear off if the power of vanity doesn’t keep your back muscles flexed without getting sore.

In short, it’s not comfortable, with a seat height of 835 mm, it’s not too friendly for shorter individuals. The weight is a saving grace, but you won’t get as much leverage compared to a Svartpilen or a 390 Duke. You really have to commit if you’re planning on buying a Vit. You have to make sure that you're okay with neck-breaking looks with a back-aching riding position. We totally understand if you go for the Svartpilen because visiting your chiropractor could get a wee bit expensive. 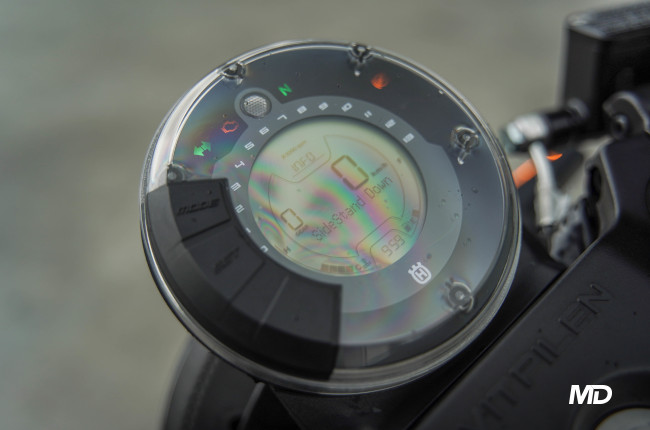 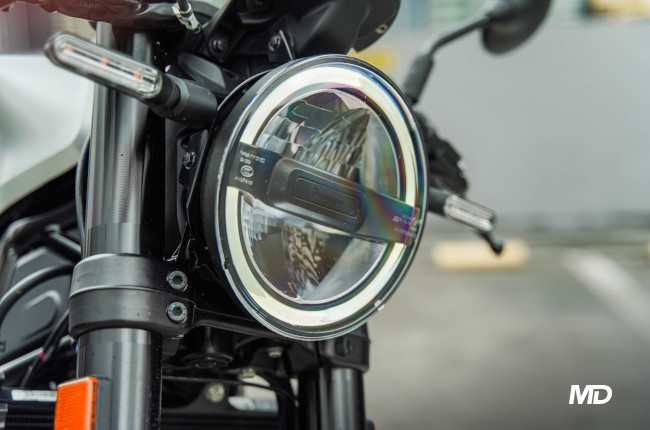 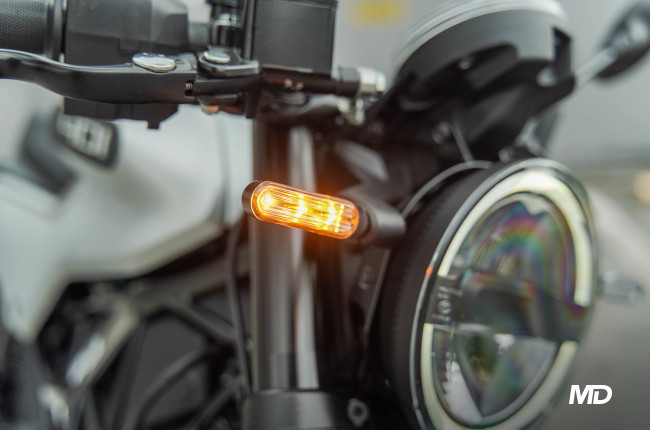 If you’ve experienced a KTM RC or 200 Duke, then the Vitpilen 401 is not that different. The digital gauge cluster features the same readouts in the same format as the KTM counterparts. It’s generally a pretty usable instrument cluster, but part of us wishes that it were an analog unit instead, or a combination of the two. That being said, it’s a small matter of preference because you get everything you need anyway. There is a fuel gauge present, a fuel economy meter, a trip computer, odometer, speedometer, tachometer, and a shift light that can be configured to light up at a certain engine speed. You also get a gear position indicator which is plenty useful while riding.

As standard, the 401 series of motorcycles from Husqvarna have ABS for the front and the rear, which is great. You may also turn the ABS off if you’re feeling feisty. Though, during our testing period, we kept ABS on for full peace of mind. 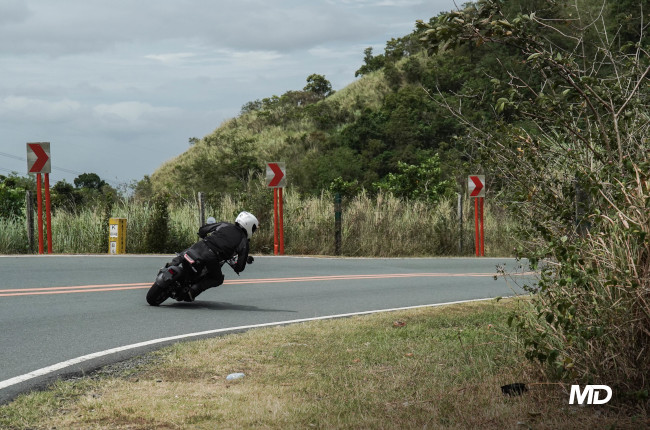 Even with the clip-on handlebars, we think that the Vitpilen 401 is still plenty usable as a daily rider. You can get on the highway and you can also take it around town. We don’t recommend that you use this bike for long rides, however. That honor fits the Svartpilen a lot more. There are ways to keep yourself comfortable on longer trips, like having a stretch at a cafe or something to that effect.

We cannot deny that it is a light motorcycle to ride. The seat height might be a bit tall at 835 mm, but we managed. However, that’s offset by its thin inseam, which gives you a little more leeway when reaching the ground with one or two feet. 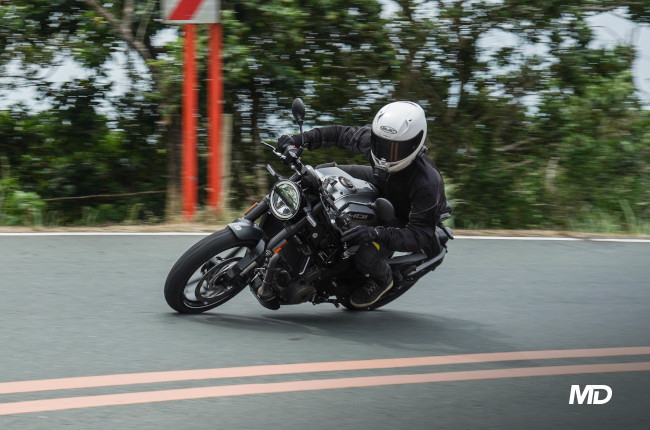 Honest to goodness, we loved our time with this bike. It was kind of hard to return the keys. In fact, a few of us were considering getting one for ourselves. With bigger bikes or similarly-sized motorcycles in our respective stables, the Vitpilen is small enough but large enough to be used in and out of the city. Performance is also good enough for a daily rider or as a weekend toy. Take your pick. Just make sure that you’re mentally and physically ready for it. 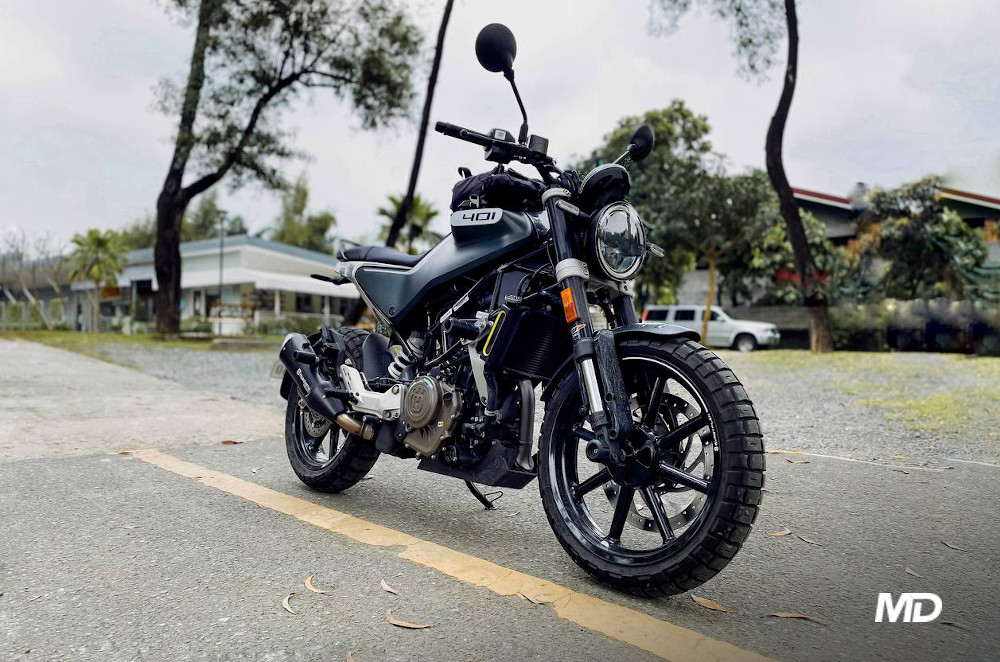 At a price of P315,000, however, it seems a bit pricey for what it offers, but definitely worth a look. Before you buy this bike, however, we recommend that you do some back exercises to prepare yourself for the riding position. It’s a great motorcycle to ride. However, if you are looking to widen your search, look no further than the Svartpilen 401. It has a more relaxed riding position but with the same engine performance as the Vitpilen 401. It still has the Husqvarna look, but with a more rugged appeal. If you want it to handle more like the Vitpilen, consider changing the tires to a more road-going set.

If you want to go to other brands, Bristol has a lineup of motorcycles that are more retro but aren’t nearly as athletic as the Husqvarna. The BR 400i for instance features a similar riding position and proportion to the Vitpilen. You can also consider the RE Continental GT 650, which has more displacement, but around the same power out of its parallel twins. It’s built well, with the majority of the bike being constructed out of steel, however, it’s not that light and you might struggle with the weight a little bit. That being said, the Vitpilen 401 is something that’s quite unique in the market, and really is worth a look, especially if you’re a fan of KTM’s engine performance.