Over the past few years, CFMOTO has been continually improving on the quality of their motorcycle releases year on year. The recent and ever-growing popularity of the 400 NK, 650 MT, and the new 700 CLX is a testament to CFMoto’s ability of producing motorcycles that don’t just look good, but also walk the talk with reliability, after sales service, and overall value for money. It’s no surprise that when CFMoto’s 300SR hit the Philippine market, people were curious to know exactly what this affordable sport bike has to offer.

The CFMOTO 300SR puts itself in a very unique spot in the market. The engine displacement of the 300SR puts it in similar ground as the BMW G 310 R and the Yamaha R3, while the selling price puts the 300SR within reach of the Honda CBR150R, the Yamaha R15, and the Suzuki GSX-R150 buyers. While the price-to-displacement ratio seems to point towards a very good deal, we wanted to find out just how the CFMOTO 300SR fares when put into real world conditions.

CFMOTO 300SR Review - Beyond the Ride 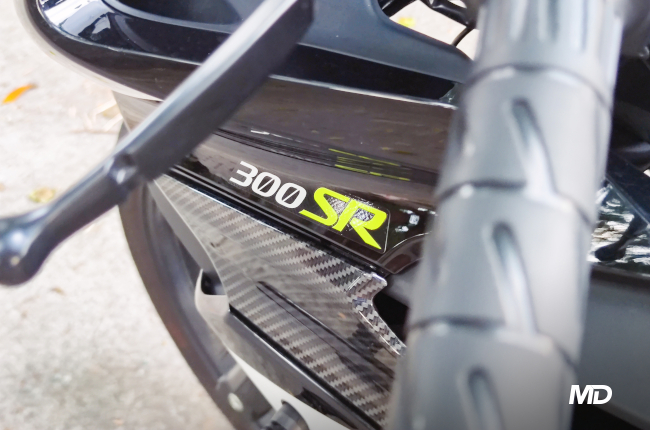 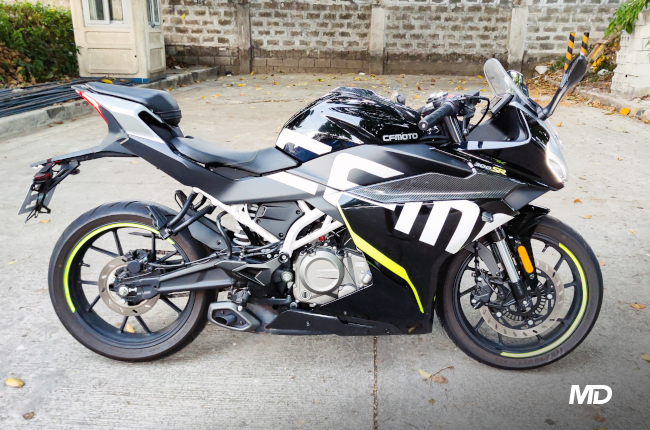 Let’s get straight to the point—the CFMOTO 300SR is a stunner for a beginner sport motorcycle in the 300cc segment. It can certainly pass as a sport bike from a higher segment given the very aggressive styling and pointy design cues. The 300SR features a sharply-designed front end consisting of an LED headlight with daytime running lights, a 37 mm upside down fork, angular and sleek side fairings, and a factory decal kit which makes the 300SR look like it belongs on the race track. The side and rear of the 300SR compliment the aggressive front with a very angular and pointy design.

Apart from the aggressive styling, other details of the 300SR also make the motorcycle feel more expensive than it sells for. The front daytime running lights and LED taillight gives the bike a fair amount of road presence. The TFT display and adequately-sized cockpit establishes a more premium feel on the motorcycle. Overall, the 300SR certainly feels like an overachiever in the looks department and is styled more aggressively than most—if not all—of the other beginner friendly sport bikes in the market in this price segment.

However, something to note is the creak in the tank. The tank you see on the bike is a plastic cover,  and it has a tendency to make noise if you push down on it. While this noticeable while the bike is standing still, it's not really much of a problem at speed. 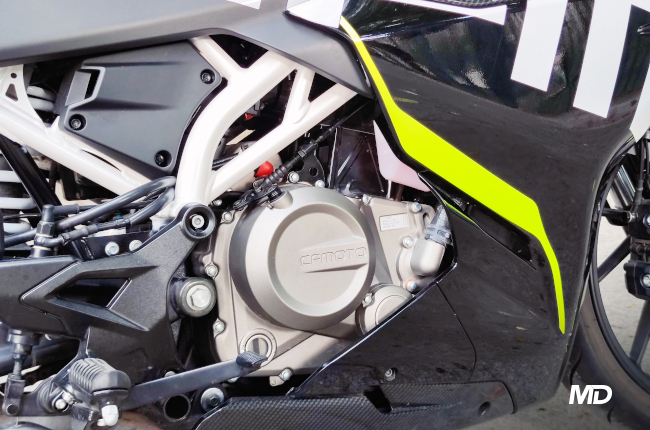 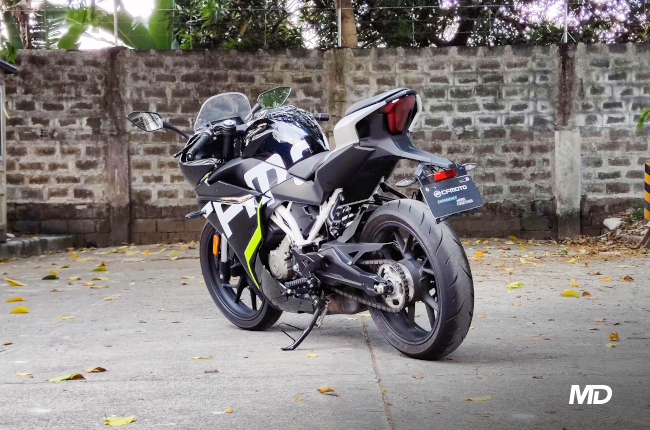 The CFMOTO 300SR, being dressed as a bonafide beginner sport bike, is actually quite tractable when heading for a ride out. Despite being a 292cc single-cylinder thumper, the 300SR’s engine is quite compliant—the throttle does not feel snatchy at all, the clutch has a consistent and reliable biting point, and the power delivery is quite smooth. 29 hp and 25 nm of torque may not sound like a ton of power at first glance, but the 300SR’s engine is compliant enough to get you through low-speed maneuvers without feeling lacking, and has an adequate wave of top-end grunt to pull you through quick overtakes. The brakes, despite feeling a bit wooden on the initial bite, do a great job at stopping this light sport bike thanks to the large 292mm single disc up front and a 220mm disc brake system at the rear.

When taking the 300SR through twisty roads, the little sport bike feels more at home thanks to the 37mm upside down forks in the front, rear monoshock suspension, and the lightweight wheel hubs. The only drawback however is that the suspension may be a little bit soft if you were to keep this as a dedicated weekend carving machine—it leans into corners well but can feel unsettling when approaching the limit of grip. The soft suspension is likely a compromise for comfort as the bike is designed to take daily duties as well, and we wouldn’t trade up daily comfort for cornering performance on a bike like the 300SR. The 300SR likes to lean through corners as much as it enjoys a more relaxed cruise around town, making this bike a perfect all-arounder for the sport-oriented rider. 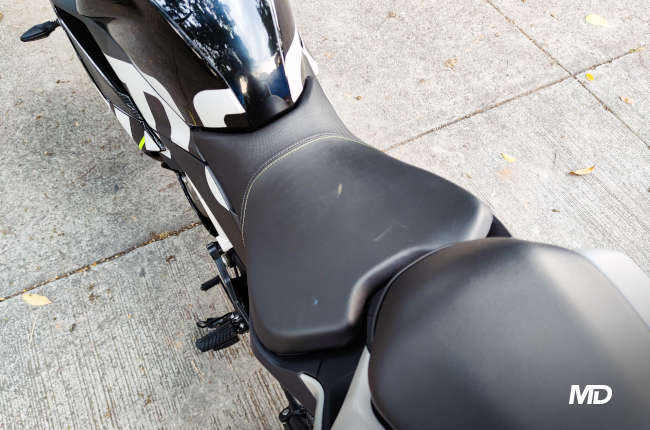 When you swing one leg over the saddle and get positioned to ride, you’ll soon find out that the seating position of the 300SR is actually quite comfortable and is not as aggressive as the looks might suggest. When viewed from the side, the rider’s saddle sweeps down quite a bit which makes the 780mm seat height very approachable to the average rider. The foot pegs sit fairly high for a semi-aggressive stance, and the mid-rise clip on handlebars sit relatively high which allows for a relaxed forward lean position. Tall riders on the other hand, might find this motorcycle a bit cramped, but overall, the entire rider triangle makes the 300SR a very comfortable motorcycle for the average-sized rider out there.

Apart from the approachable rider triangle, the relatively wide and comfortable seat did not leave any sores after about 2 hours of riding, however, sit on the saddle a bit longer and the seat starts to feel a bit stiff. The relatively light curb weight of 165kg makes the 300SR a very easy motorcycle to carry through low-speed maneuvers, and the slim nature of a sport bike makes the 300SR very easy to ride through tight spots on the road. If anything, the only significant drawback to comfort would be the vibrations through the handlebar and footpegs. However, motorcyclists who regularly ride single-cylinder motorcycles will find no issue taking the 300SR around for a few hours a day. 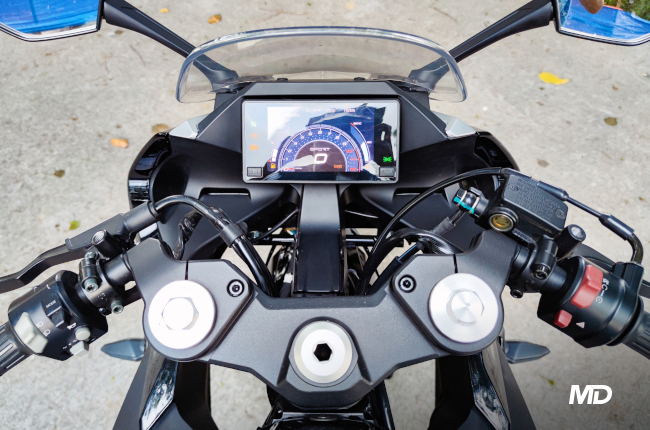 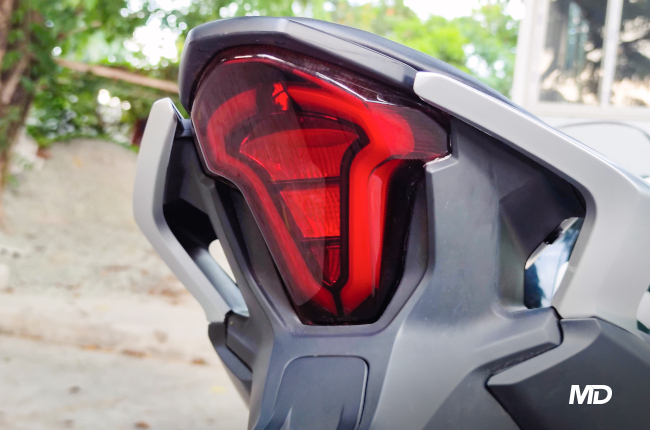 With the CFMOTO 300SR, gone are the days of low-displacement beginner motorcycles with low-tech features. During our ride, we were happy to find that the 5-inch full color TFT display of the 300SR played a drastic role in making the cockpit feel fresh and modern while displaying all of the essential information in a neat package. We were also pleased to find that the TFT display can switch between two different interfaces for sport and rain riding mode, has a decent level of adjustability for brightness, and can also connect to your mobile phone through Bluetooth.

The 300SR also comes with a lot of bits and pieces that add up to a very modern motorcycle—the entire lighting package is dressed in full LED, the engine is equipped with no less than a Bosch EFI system, and the brakes are equipped with a Continental ABS system for rider safety. For the price, the 300SR provides a very decent electronics package which makes the motorcycle feel a lot more modern without being overbearing or unnecessarily overcomplicated for the average rider. Coming in at just P165,000, the CFMOTO 300SR is incredible value for money. It is similarly-priced with competitive beginner sport bikes in the 150cc class, but comes with nearly double the displacement and a higher quality electronic package. As with many CFMoto motorcycles, value for money is the name of the game when it comes to the 300SR. As such, the CFMOTO 300SR is built for the rider who enjoys modern componentry, an eye-catching style, a versatile sport bike built to ride well, and a good deal.