Yamaha has been dedicating more time on their Leaning Multi-Wheel (LMW) range of tilting trikes and is looking forward to expanding their range of trikes. A new patent suggests that a brand new three-wheeled TMAX 560 may be in the works for the near future. When Honda released its new X-ADV 750, people were anticipating Yamaha’s response over Honda’s unrivaled off-road capable maxiscooter. While speculations were pointing to a release of an equally capable TMAX “ADV” scooter, Yamaha simply mummed the idea and said, “It is not in our DNA to do something that others have already done,” — oooh burn. 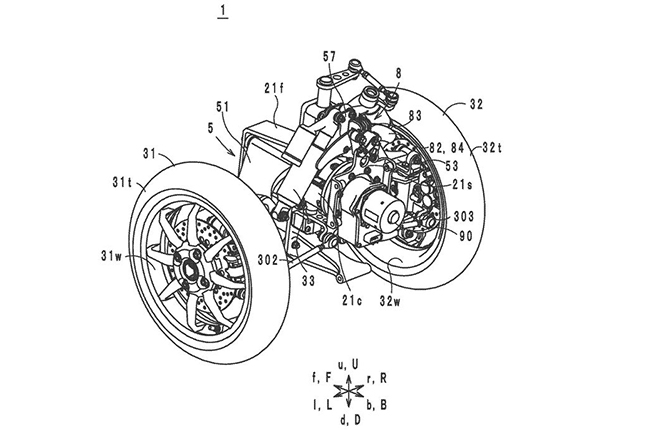 With its current lineup of trikes, namely the MT-09 based Niken and the Tricity scooter, its current layout gives the system a massive front end with two telescopic legs for each front wheel mounted on a pair of pivoting parallel links. While it does allow the wheels to tilt together with the bike while cornering, the heavy front end still gives the vehicle a high center of gravity which can be considered as a flaw to its design. However, this design was made with the pursuit of making it behave more like a motorcycle rather than a “three-wheeler”.

Back in 2017, Yamaha was able to acquire the patent rights to another leaning front suspension system which was developed 15 years ago by Brudeli Tech in Norway. The system was briefly used for KTM’s line up of trikes under the Leanster name. Instead of having two telescopic legs paired to pivoting parallel links like the Tricity, Brudeli’s system made use of a double-wishbone suspension system which was combined with a central shock mounting post that would remain upright during corners. It would be noted that a double-wishbone system was more commonly used in cars, and yet, Yamaha went for the patent rights anyway. With Brudeli’s design, the wheels and the main body of the bike would both lean over without compromising the effectiveness of the bike’s suspension. During last year’s Tokyo Motor Show, Yamaha unveiled its MW-Vision concept which made use of the Brudeli-style suspension system as an electrically powered, enclosed three-wheeler. However, their latest patent shows a similar front suspension arrangement but with an engine seen in the TMAX 560. As such, it is powered by a 47-hp, 562 cc parallel-twin engine that drives the rear wheel with a V-belt and mated to a continuously variable transmission. With this unique design coupled with the TMAX’s capable engine, if this turns out to be Yamaha’s “answer” to the X-ADV one thing is certain — Honda’s X-ADV has fewer wheels than this one.