Vespa has recently collaborated with one of the most creative and influential young designers from the street fashion scene, Sean Wotherspoon. The collaboration has produced one of the craziest looking Vespa’s you’ve ever seen with its Primavera Sean Wotherspoon special limited edition. The special edition Vespa was unveiled last Saturday, August 22, 2020, through its official Facebook page. The result is a very unique scooter that easily stands out by unleashing the creative energy that resulted from the partnership.

Based on their immense history and heritage I’m beyond excited to start work with Vespa/Piaggio. I’m going to dig as deep as possible to help recreate these memories and re-imagine them through my lens to share with everyone! This is going to be insane! Stay tuned!
Sean Wotherspoon
Sneaker Designer, and owner of Round Two Sneaker Store The Vespa Primavera Sean Wotherspoon special limited edition features an explosion of eighties-style and color that showcases flamboyant irreverence. It uses the colors yellow, red, dark green, and aquamarine to wrap the entire scooter. The scooter also features an embellishment of white inserts with the profiling of the Vespa silhouette and its rims which also comes with a replication of the contrasting Vespa logo. The special edition Vespa also makes use of chrome finishes for the headlight frame, its luggage rack, and passenger grab handle. At the same time, black details can be found on its hand grips and silencer cover to make the colors pop out even more. Its red footboard bears the same color as its shock absorber, with a blue rubber insert that stands out from the scooter’s metal body. Sean Wotherspoon also chose a light brown ribbed velvet material for the scooter’s saddle. A dedicated graphic customizes the rear of the body, serially repeating the name 'Primavera' for an original optical perspective. Finally, the Sean Wotherspoon signature tag sits right below the Vespa logo on its front panel. 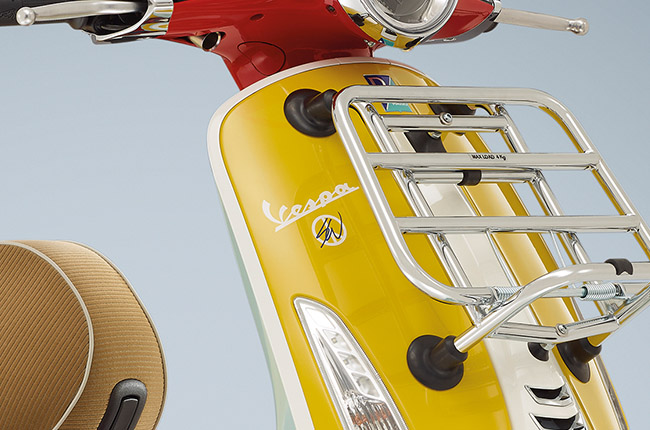 It is powered by the same 3-valve 4-stroke single-cylinder 155 cc i-get engine seen on the Primavera that’s capable of churning out 13 hp at 7,750 RPM and 13 Nm of torque. It is mated to a CVT and comes with ABS for the front tire.

Sean Wotherspoon is also releasing his capsule collection of streetwear clothing consisting of 2 T-shirts that also retains the same vivid colors used in the limited edition Vespa scooter. The collection is meant for lovers of iconic simplicity and goes really well with the Vespa Primavera Sean Wotherspoon special limited edition scooter. It is priced at P308,000 and is now available through its exclusive distributor Motoitalia Philippines, Inc.