Just a couple of weeks ago, we attended the RidePH Café event, organized by Jay Taruc and was treated to an afternoon of displays of motorcycles, gear, apparel, and art related to this thriving motorcycle scene. We had the occasion to stumble into a new player in the industry that’s set to make a mark in the dirt bike scene. 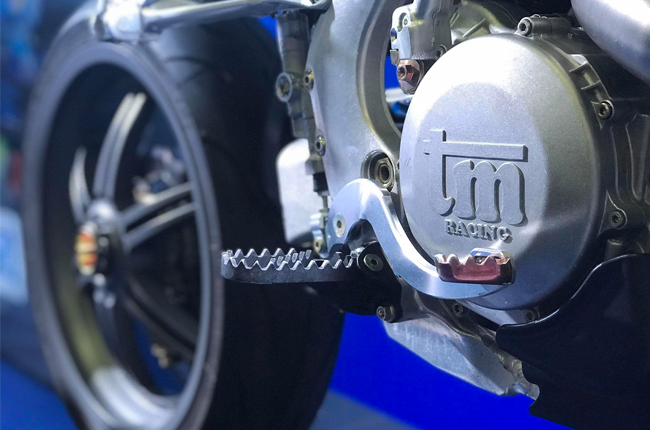 TM Racing Motorcycles, a brand that specializes in top performance dirt bikes was started in 1977 by Claudio Flenghi and Francisco Battistelli, childhood friends who shared the same love for motorcycles and racing. They took a risk by leaving their day jobs to combine their talents to create their very first dirt bike. This was all made in the town of Pesaro in Italy. TM Racing quickly gained a reputation for exceptional quality and high-performance and despite being considered a small boutique motorcycle company, they greatly supported motocross athletes in developing their skills through their motorcycles both in Italy and in the USA.

Now available in the Philippines, TM Racing Motorcycles was introduced to us by Alvin Nazal, owner and CEO of Kidd Code Racing Inc., its official distributor. They also happen to be the official distributor of Termignoni Exhaust Systems in the Philippines. He aptly describes TM Racing motorcycles as the Ferrari of dirt bikes. Nazal added, “To put it in perspective, a typical supercar, or a Ferrari, has lots of top-shelf hardware installed from the factory, like titanium valves, CNC-machined components, etc.. That goes the same with all of our TM Racing motorcycles.”

Their dirt bikes start at a price of Php 585,000 for their 125 2T, considered their most affordable two-stroke motorcycle. Their top-of-the-line twin-pipe four-stroke dirt bike price starts at Php 735,000. But besides their dirt bikes, they also offer Supermoto models such as the SMR 450 FI which price starts at Php 685,000. The 528 cc SMR 530 FI and SMM 530, both featuring an equipped single-sided rear swingarm are both priced at Php 695,000. Clearly, TM Racing is on a mission to be a force to be reckoned with in the dirt bike scene.