Yesterday, Royal Enfield unveiled the first street scrambler in its lineup, the Scram 411. A part of the Himalayan family of models, the Scram ditches quite a few of the adventure tourer’s more rugged adornments in favor of a more urbanized and sleek look. Royal Enfield did something special to the Scram, eschewing a few of the rugged retro look that the Himalayan had in favor of a more modern and urban character. Instead of the factory crash cage that the Himalayan is known for, the Scram ditches that in favor of a bare tank, and a headlight that turns with the bars. You lose the windshield, which would have been perfect for touring, but urban riders achieving slower speeds may enjoy a gust of wind from time to time. There are seven colors on offer from Royal Enfield, namely White Flame, Silver Spirit, Blazing Black, Skyline Blue, Graphite Red, Graphite Blue, or Graphite Yellow. We will admit that the colors that Royal Enfield has chosen are leaning more towards the modern end of the spectrum, but that’s all well and good considering that it is a breath of fresh air from the brand, and Royal Enfield paints are usually on-point. Being based on the Himalayan 411, the Scram is powered by the same air-cooled, single-overhead-cam, fuel-injected single-cylinder thumper of an engine that has 411ccs of displacement and 24 hp with 32 Nm of torque. The gearbox is a five-speed manual transmission. 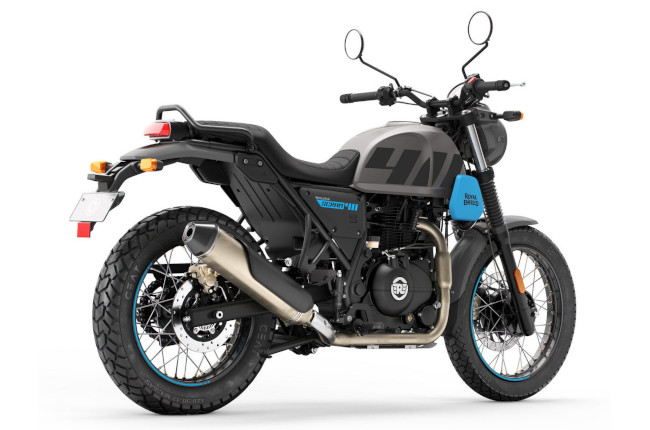 Chassis-wise, the Scram uses the same exact platform as the Himalayan 411, except for the wheel size coming in at 19 inches in the front and 17 inches in the rear (The Himalayan uses a 21-inch front). The wheels link up to a 41mm telescopic fork in the front and a rear mono-shock with a linkage setup in the rear. This is essentially the same setup that the Royal Enfield Himalayan 411 enjoys. Braking for this model is handled by a set of two-piston floating calipers, that clamp on a 300mm brake disc in the front. The rear uses a 240mm disc with a single-piston caliper at the rear. Dual-channel ABS is also standard on the Scram 411. Other tech and safety features on this bike include the same cluster that can be found on the Classic and Meteor 350 models. The cluster will feature a new display pod off to the side that's for trip and navigation information. Perhaps the most appealing thing about the Scram 411 is the price tag that it has in India. Currently, the model is only launched in the brand’s home country, and a launch may happen sometime in the future for the rest of the world. For now, the bike’s pricing starts at about 2.03 lakh Rupees or about P138,000. If you convert the Indian pricing for the Himalayan to Philippine Pesos, you will end up with about P150,000. Of course, the Scram 411 won’t be priced like that once it reaches the Philippines, instead, we’re expecting that the Scram 411 will go for just about P300,000 considering that the Himalayan goes for about P340,000. So for about P300,000, you get the same chassis as the Himalayan and with highway legality to boot. Royal Enfield Philippines has not disclosed when the Scram will make it to the country, but we expect that the model will come here sometime soon, if not very soon.