The Royal Enfield Himalayan is loved by many thanks to its dependability, reliability, and go-anywhere capability. While it is by no means the fastest, or most powerful big bike out there, one can’t deny the wholesome fun—on any terrain—this docile dog promises to deliver. While the Himalayan’s go-anywhere tractor-factor certainly appeals to a good number of adventurous riders, it does present itself a tad overbearing for those looking for a street-focused ride.

Now, we’ve known Royal Enfield as a company that listens very closely to its patrons. When the world clamored for a street-oriented scrambler, RE was quick to act, patenting the Scram nameplate earlier this year. While earlier speculation suggested that the Scram would be based on the company’s famous 650 platform, it turns out that the Scram will be a lot more docile, as it’ll be based on the Himalayan platform, with its 411cc single-cylinder motor. As such, we can expect the new bike to be equally approachable as the Himalayan, albeit sporting a more road-going nature. 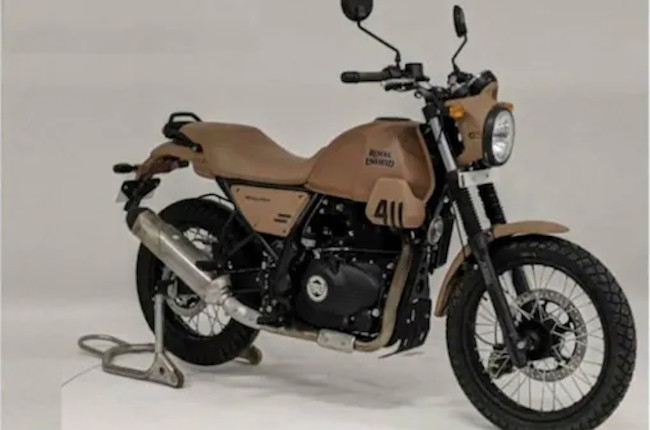 We can expect a few key differences between the Scram and the Himalayan. For starters, expect the new bike to feature a more naked design—sans the windscreen and burly crash protectors. Expect it to be a lot slimmer, too, forgoing the bulky tail section in favor of more streamlined rear. We may also see revised suspension components, with shorter travel forks and a backlink monoshock. Lastly, the Scram may also end up ditching the Himalayan’s 21-inch front wheel, in favor of a more scrambler-y 19-inch setup.

Reports from numerous Indian motoring publications suggest that we could also be seeing Royal Enfield’s Tripper Navigation system on the Scram. This is definitely a welcome add-on, as the bike is designed to spend most of its time on the street. This isn’t to say, however, that the Scram won’t be able to hold its own off-road. After all, the Himalayan platform is extremely capable off-road out of the box, so it’s more than likely that the Scram will be equally at home on light gravel roads and trails, too.