The love for Royal Enfield knows no bounds across the world, and there is a myriad of riders who love RE’s platforms for many different reasons. Performance doesn’t necessarily spring to mind first when thinking of RE, but it’s important to remember that Harris Performance was responsible for the RE Twins’ design, preparing it to be race-ready.

Naturally, and with that type of engineering involved, the next step would be to prove all that performance out on the race track. The Continental GT Cup was started in India in September 2021. The racing series was first restricted to India, but it is now heading west to France. There is also a possibility that the series will expand further to the rest of Europe and possibly the United States. Asian RE fans may also expect the brand to expand should its near-future endeavors prove successful. The expansion to France is an indication of things to come, and it could signal that RE’s ready to show off what its bikes can do to the world.

France will be the first country outside of India to host the Continental GT Cup, the event will be accompanied by a limited-edition race-only version of the cafe racer. Track bikes attending and racing in the event will be required to meet the French Motorcycling Federation’s safety criteria, and the competition can be joined by just about anyone who wants to ride for a nominal and fair entry price.

The four rounds of the Continental GT Cup will be held on the circuits of Ales, Carole, and Croix-en-Ternois. Its schedule is set between the months of April all the way through to September 2022. 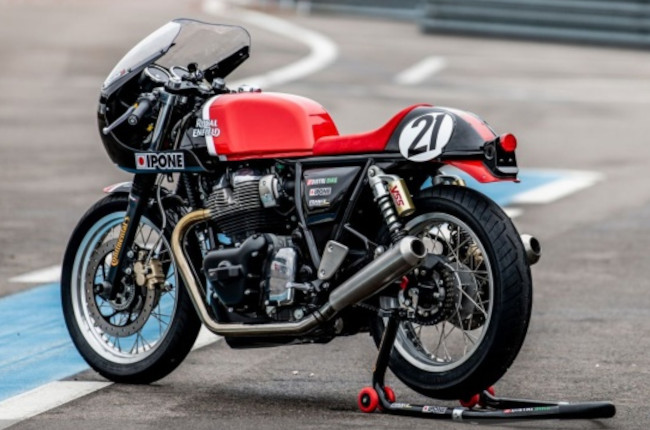 As for the bikes that will be participating in the event, a specialized package to improve handling and performance bikes will include upgraded suspension, a skid plate, a front fairing, a single seat and painted seat cowl, crankcase and lever guards, Remus silencers, handlebars, and tank pads. The package is called the Continental GT Racing package, and it is available for around € 3,000 EUR, but participating in the tournament will net you a discount, and bring the price down to € 1,999 EUR. Participants may either purchase a Continental GT to take part in the event or may already own a Continental GT. The racing kit can be purchased separately from the bike as a standalone if the participant already has a motorcycle to race, or a new Continental GT can be purchased with a racing kit on top.