MV Agusta is by far one of the most exclusive and highly sought-after brands in the motorcycle world. Certainly, if you own an MV Agusta, it’s safe to say that you’ve made it in life, and are very much deserving of this beautiful, performance-oriented machine. The Italian icon is known for releasing numerous limited-edition models of its bikes. This time around, the company has revealed what could be its most historic model yet.

Unveiled in Misano last weekend, the MV Agusta Superveloce Ago pays tribute to a living legend. Giacomo Agsotini, the Italian motorbike racer who was largely responsible for propelling MV Agusta to racing stardom holds the unrivaled record of 15 world-champion up titles. Agostini has won a total of 311 Grand Prix races, and is undoubtedly a living legend in the world of motorsports. Having said all that, it really isn’t surprising that the Superveloce Ago is by far the most exclusive version among all other limited-edition machines. Mind you, the Superveloce, in and of itself, is already an extremely exclusive machine. 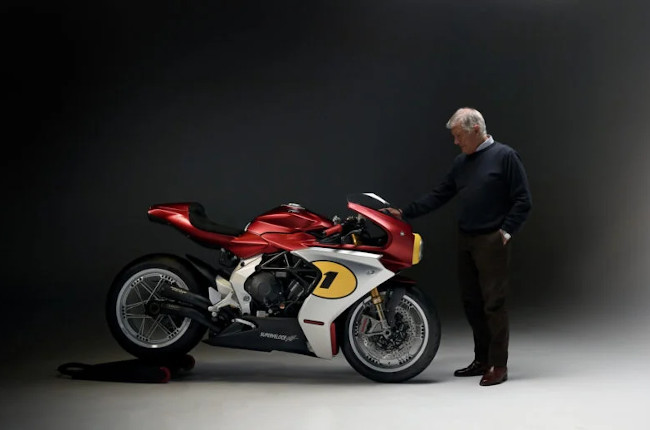 Beneath the Superveloce Ago’s charming, retro aesthetic lies a thoroughly capable sportbike. Sharing the same platform as the MV Agusta F3, the Superveloce takes all of its race-ready performance and packages it into a beautiful, timeless classic. To top it all off, the fact that the Superveloce Ago pays tribute to one of the world’s most legendary racers just makes it all the more special. Last Saturday, October 23, 2021, Giacomo Agostini, together with MV Agusta, unveiled the Superveloce Ago. The Italian racer, now 79 years of age, once again donned his leathers and took the Superveloce Ago out on a commemorative lap—highlighting both his achievements as a racer, and MV Agusta’s decades of racing heritage.

The new MV Agusta Superveloce Ago comes out of the factory with a special racing kit which includes a factory aftermarket Arrow exhaust system, which is homologated for street use. It gets beautiful twin mufflers, one on either side. This race-inspired touch gives the Superveloce a more performance-oriented appeal, while improving the bike’s already beautiful exhaust note. Only 311 MV Agusta Superveloce Agos will ever see the light of day.