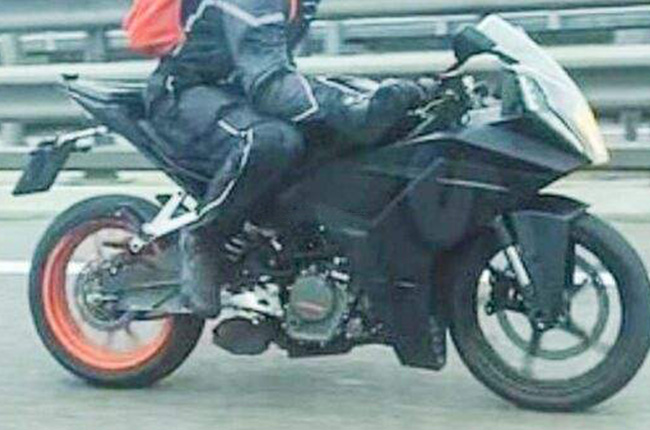 The KTM RC 390 has proven to be a capable tuck-and-roll little sportbike that’s fun to take both as your daily commuter, or as your track-day companion. While the RC range has seen huge success ever since it was introduced to the market a couple of years ago together with the ever-tightening emissions standards, KTM’s little crotch rocket is due for an update. Recent spy photos of what appears to be KTM’s update on its RC range started surfacing online being tested out on the road.

While it was unclear whether the bike being tested was the RC 125, 200, or the 390 cc iteration, it still gave us a pretty convincing indication of its silhouette and styling. Its all-black color scheme made it difficult to point out the actual size of the bike, yet some clues hinted to its 125 cc version. The bike’s exhaust seemed to be underslung with its engine’s dimensions pointing to the smaller end of the RC range, with either the 125 or 200 cc bike. Yet, the most notable change, besides the expected Euro5 compliance, was it's thoroughly overhauled styling. The photos reveal a reshaped fairing with its screen overlaying the nose section and extending above it to give the rider a little bit more wind protection. The spy shots also reveal a simpler and uncluttered design of its side fairings giving it a much cleaner look. However, while not much more can be taken away from the photographs, it appears that the frame, swingarm, and suspension remain untouched, with the only possible change on the chassis appearing to be its front brake.

The new RC seems to be sporting a disc with a larger diameter compared to its predecessor, but with a more slender profile. At the same time, it still seems to be mounted to the wheel spoke with a four-pot caliper to bring the bike to a stop. Official specifications and details are yet to be released by KTM until its official unveiling. With the new bike already looking pretty good as it is, the Austrian motorcycle manufacturer seems to be heading towards the right direction to buyers and enthusiasts alike with a bike that wouldn’t disappoint its loyal fans.