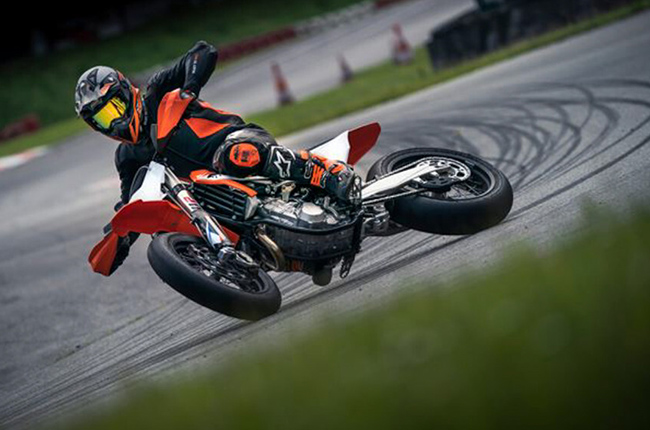 The KTM marque has always been synonymous with high-performance motorcycles when it comes to off-road and supermoto. This is proven with its countless Dakar Rally championship titles and motocross wins through the decades that helped the design and development of its dirtbike, enduro, and adventure motorcycle lineup. However, true fans of the KTM brand have been longing for its most potent 450 cc supermoto model. Lucky for them, KTM listened, and for its 2021 lineup, the KTM 450 SMR finally makes it back to the catalog. The KTM 450 SMR is a formidable supermoto bike that you can take out of the showroom floor and bring it straight to the race track without doing any tweaks on its settings. It embodies the brand’s guiding philosophy as a bike that’s ‘Ready to Race.’ It borrows the same powerplant seen in the 450 SX-F motocross bike with a 450 cc 4-stroke, single-cylinder engine capable of producing 64 hp and 47 Nm of peak torque. It is mated to a 5-speed manual gearbox and is equipped with a Suter slipper clutch set that’s optimized for supermoto racing.

KTM Released its 2021 motocross lineup with a virtual launch In comparison, a typical 600 cc parallel-twin motorcycle that produces the same amount of power would normally weigh in at 200 kg. KTM has redesigned the 450 SMR’s frame for robustness which includes a 900 g subframe making it tip the scales at less than 130 kg. Its frame is cast with a 16 mm offset through the CNC-machined triple clamps with a three-way amendable handlebar adjustment to suit the rider’s preferences. Its die-cast swingarm has also been lightened and can be tweaked to be optimized for better feel on any given supermoto track. It also features a pair of 48 mm WP XACT air-type front forks, with XACT rear mono-shock to keep bumps at bay. Stopping duties are provided for by Brembo 310 mm disc with a 4-piston caliper for the front. It is also equipped with launch control, traction control and has a 7-liter fuel tank capacity. KTM hasn’t officially announced its official price or the exact date of its availability.