After many years in the old showroom, KTM BGC relocates to a new location not too far from the original. The new BGC location is about as big as the old one, but it now has new facilities that are even more orange than before.

KTM BGC was up and running even before the inauguration of AC Motors’ Centrale location. The inauguration ceremony of the one-stop shop for everything AC Motors was held on June 28, 2022, and it brought all the brands under the automotive and motorcycling arm of the Ayala Corporation under one roof in one of the prime business and lifestyle districts in the metro. Brands like Isuzu, Honda, Kia, and Volkswagen can all be found at the Centrale dealership, which showcases the best that the Ayala Corporation has to offer Filipino car buyers. Then we have KTM, the motorcycle brand that the Ayala Corporation is proud to have spearheaded in the country. It’s also no secret that KTM and Husqvarna are both cut from the same cloth, so the Swedish brand also makes its presence known in the establishment. 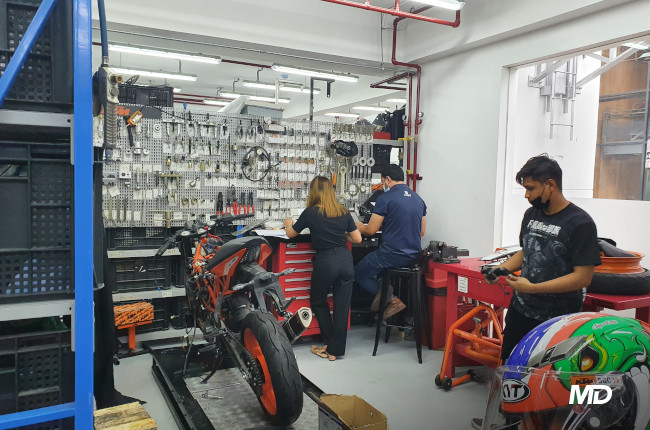 Among the Ayala brands, KTM BGC is the only brand in the establishment to boast a service center complete with three main bays for service along with another work area and storage for the brand’s bikes. Aside from its back-end facilities, the front-end is loaded with gear, display bikes, and a nice customer waiting area where you can sit back, relax, and enjoy the orange of the place. The service entrance is still on Lane O near 28th Avenue of BGC near High Street, but you will definitely not miss it. If you are a KTM owner, be sure to check out the new showroom, and if you have some spare time, check out the rest of the brands that AC Motors has to offer by taking a short stroll through AC Motors Centrale.