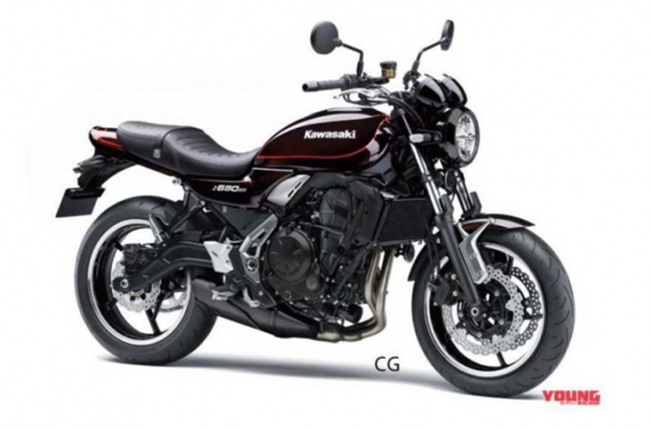 Young Machine is reporting a rumor suggesting that Kawasaki is working on another modern classic. The bike will allegedly be none other than the Z650RS.

Young Machine has been well regarded with reliable insider information from people deeply involved within the big four Japanese motorcycle brands. Though at this moment, while the news still couldn’t be considered as written in stone, it’s practically as close as we can get to an official announcement from these early stages. Just as they did with their past predictions, they came up with a realistic computer-rendered image of how the new motorcycle could possibly look like. The rendering shows the Z650RS sharing the same powertrain as the Z650 naked, but with the same teardrop tank and flowing ducktail seat unit seen in the bigger Z900RS modern classic. It also shows the same dual analog dials mounted on top of its single round headlight for that old-school UJM look. Black powder-coated wheels and polished rims adorn its tires to complete the bike’s look. Clearly, if the rumors are true, Kawasaki would be giving us another retro bike that harks back to the 1970s, just as the Z900RS did.

At the moment, no official word has come out if the bike is in existence just yet, even as a prototype. The same goes for its performance figures. However, it’s safe to assume that it would be fairly close to the current Z650, albeit tuned differently. Just like its bigger sibling, the Z650RS would focus more on rideability and character over power and performance. It would be made to be one of those bikes you’d like to keep in your garage for a long time. If everything holds true, Kawasaki would find no difficulty winning the hearts of people into purchasing the Z650RS.